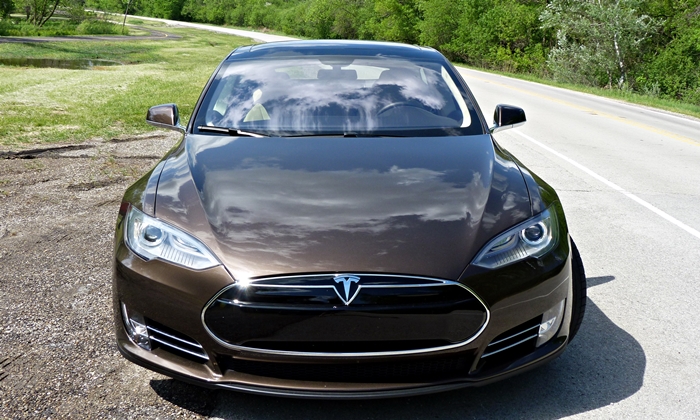 The Tesla Model S Front/Rear Camera Touchscreen Switch Kit provides a high-definition front camera view on the factory Tesla Model S touchscreen. The kit utilizes a factory Tesla rear camera that’s discreetly mounted onto the front of the vehicle and provides the same wide angle of sight and high-definition resolution as the rear camera. The camera is connected to a switch that makes it possible to easily alternate between rear to front view when parking your Model S. The kit includes the PCB switch itself and all components to make it operational, including a wireless remote control that can be synched with the Tesla HomeLink feature. Switching from rear to front view can be done via the large 17″ factory touch screen. The kit also includes an OBD2 connector that offers a simple way to provide the necessary 12v power and ground connections to the switch.

The camera switch PCB case is mounted in the space behind the driver’s side dashboard, which is accessible by removing the small triangular flap on the left end of the dash.

The switch is plug-and play and full installation instructions with photographs are be provided with each kit. Installation will be fairly easy for experienced DIY types and very easy for any aftermarket installation shop. The pre-production Front/Rear Camera Touchscreen Switch kit price is $225. This price is based on an initial production run of 100 kits and order for at least 50 kits. If a higher number of orders is placed the price will decrease. For example, for 100 orders the price would fall to about $125.00. But for only 25 orders the price would rise to about $450.00. Orders will be taken until Saturday, April 5, 2014 . The final price will be based on the number of pre-production orders actually placed by that time. Production of the PCBs will begin at that time and shipment of orders will begin around the beginning of May. If the final price is lower than the pre-production cost of $225, refunds will be made before shipment. On the other hand if the final price is higher, an additional payment will be required before shipment.

To begin you must choose one of the following options for powering the camera switch.

Powering the Camera Switch with Fuse #75 in Fuse Box 3

Connecting Camera Switch and Powering with Other Options