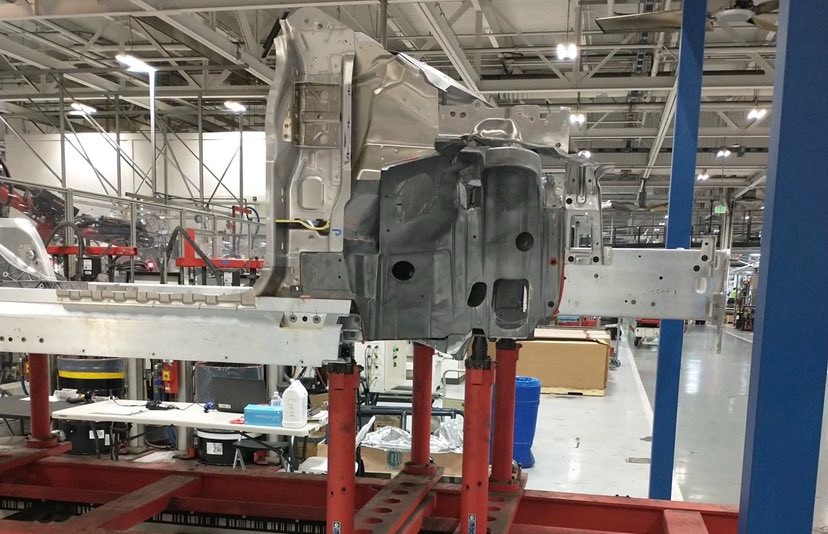 A recently leaked image from the Fremont Factory has provided what could very well be the first look at the Tesla Model S and Model X refresh’s front “megacastings.” Provided that the leaked images are accurate, it would appear that Tesla’s updated flagship vehicles would feature some of the company’s most advanced casting technologies.

The pictures of the Model S and Model X refresh’s front “megacast” was posted on Twitter by Tesla owner-investor @Ray4Tesla, who noted that they were shared by an anonymous source familiar with the electric car maker’s operations. Two images were provided in the leak: one taken beside the megacasted component and another one featuring a look inside the front casting itself.

As per the information provided by the source of the leaked images, the Model S and Model X refresh features two castings in the front underbody and two in the rear underbody. This means that the flagship vehicles’ front underbody is now tied together by the dash and central underbody. The rear underbody, on the other hand, now features two castings linked together by stamped and welded aluminum. With such a system in place, there could be one megacast for each of the flagship vehicles’ wheels.

Interestingly enough, the source also remarked that so far, the Model 3 does not utilize any megacastings in its body to date. This was something that was observed by auto teardown expert Sandy Munro, who is currently in the process of analyzing the 2021 Model 3. The Model Y, for its part, reportedly doesn’t utilize a megacast for its front underbody yet, despite featuring a single-piece megacast for its rear underbody.

Tesla’s use of two primary megacasted components for the Model S and Model X refresh’s front underbody echoes the company’s strategy during the Model Y’s initial rollout. During the first months of the all-electric crossover’s production at Fremont, Tesla’s Giga Press machines were yet to be installed, which meant that the company could not build the vehicle with single-piece rear megacasts as intended. Tesla addressed this issue by forming the Model Y’s rear underbody with two linked megacasts instead, allowing the company to ramp the vehicle’s production even before the Giga Presses were fully built.

Tesla’s use of megacasts for the Model S and Model X refresh was teased in the company’s official webpages for the updated vehicles. Just hours after the updated webpages went live, eagle-eyed members of the EV community pointed out that Tesla now depicts the body-in-white of the Model S and Model X with components that look very similar to the Model Y’s megacasts. Considering the contents of this recent leak, it appears that Tesla may really be going the megacast route for its vehicle lineup.