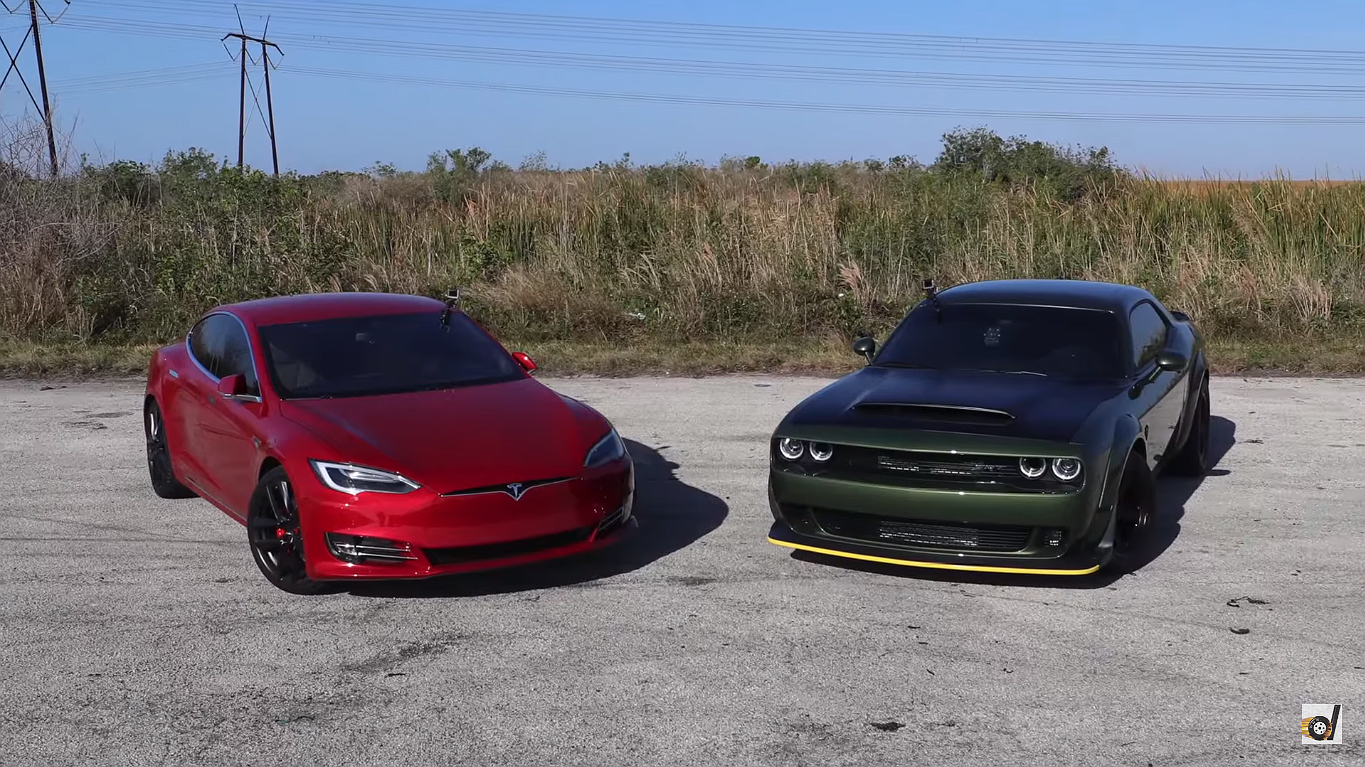 Two drag monsters — the Tesla Model S P100D and the Dodge Demon — are back, and they just had a 1/4-mile drag race rematch.

The last time the Tesla Model S P100D battled the Dodge Challenger SRT Demon, the electric car walked all over the gas-guzzling muscle car. The video, uploaded by YouTube’s DragTimes, was quite painful to watch for ICE fans, considering that the 808 horsepower beast shredded its racing slicks and was utterly decimated by the P100D in both drag and rolling races

This time around, however, the Dodge Demon is back with tires that can actually grip the road. Instead of the Hoosier Slicks in the previous bout, the Demon’s driver opted to equip the muscle car with stock OEM drag radials that came with the vehicle.

On paper, the Dodge Demon is a gas-burning muscle car that appears to be specifically designed to take down the Model S P100D. The monster of a car is equipped with a 6.2-liter Supercharged V8 engine that produces 808 hp. The RWD car is also equipped with an 8-speed automatic transmission. When it was unveiled last year, Dodge made it a point to declare the Demon as the “quickest production car” in the world, with a 0-60 mph time of 2.1 seconds — a time that dethrones the Tesla Model S P100D’s 2.28-second 0-60 time.

Dodge went above and beyond when it designed the Demon. The result of a two-year campaign by a select team of 25 Dodge engineers, everything about the muscle car is designed to make it go fast in a straight line. Dodge was so keen on saving weight off the vehicle that the base Demon does not even have a passenger seat (one can be purchased for an extra $1, but the weight of the extra seat will affect the car’s speed). Under the right circumstances, though, the Dodge Demon is definitely, well, a Demon on the track.

On the other hand, the Tesla Model S P100D is a full-sized electric sedan that just happens to be ridiculously (or more accurately, Ludicrously) fast. Beating out supercars in the quarter-mile, the Model S P100D’s 920 ft-lbs of torque and 588 hp to its wheels allow the car to launch incredibly hard from a dead stop. The electric car’s AWD drivetrain also helps it stay planted on the ground.

As could be seen in DragTimes’ Model S P100D vs. Dodge Demon 1/4-mile rematch, the ICE monster still falls behind the electric car in a standing drag race. Brooks, the host of the YouTube channel, did multiple standing drag races, and in each one, the Dodge Demon ended up several car lengths behind the Model S P100D. The fourth race, conducted after the P100D suffered power limiting as a result of overheating its batteries, fared better for the Demon.

Fortunately for the Demon, it was able to beat the Tesla in a rolling race this time around. As noted by Brooks, however, it still took quite some time before the Dodge Demon caught up and overtook the electric car.