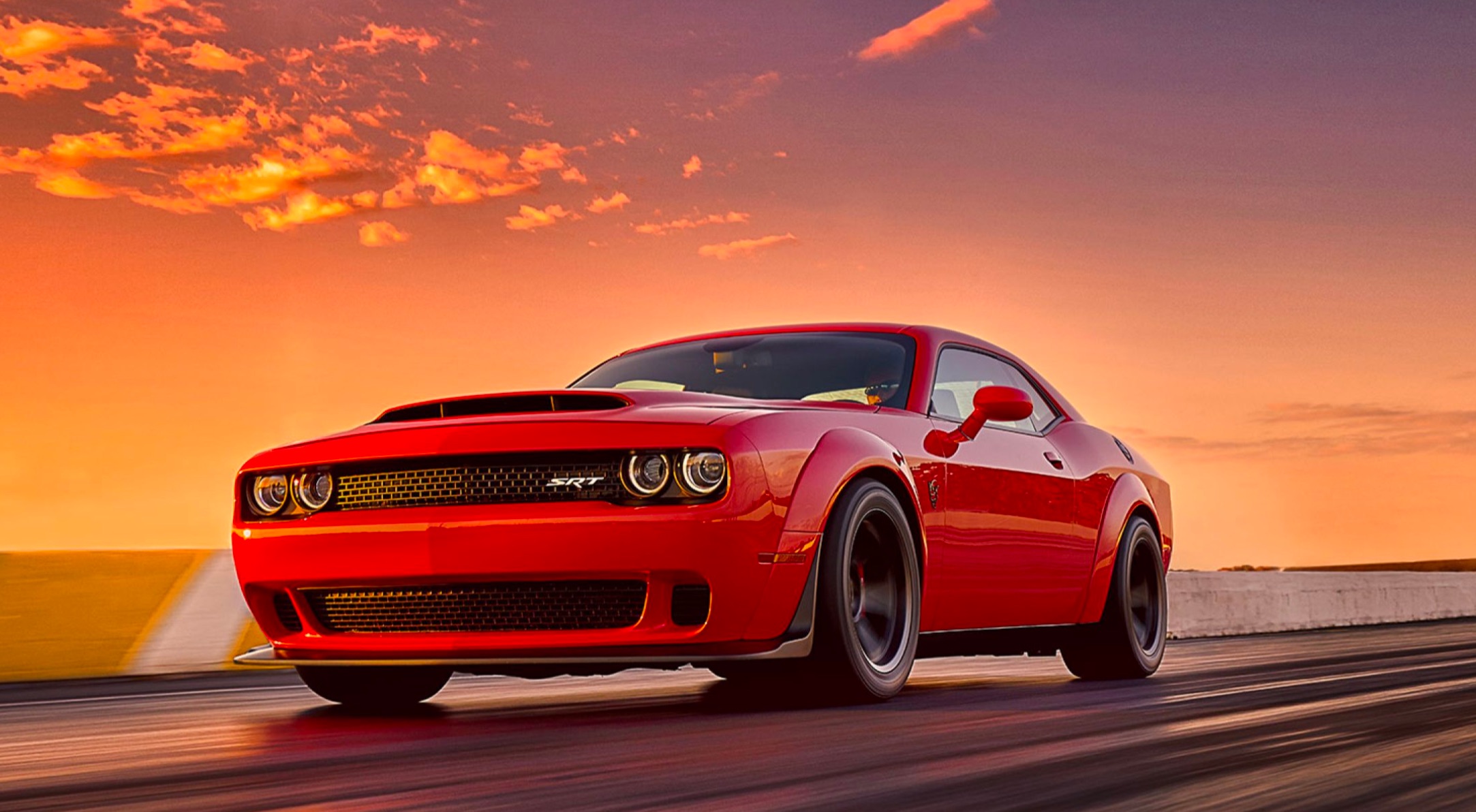 Tesla sent shock waves through the automotive world in February when Motor Trend crowned the Model S P100D the quickest production car in the world after a 2.28 second run to 60 miles per hour. Do a few hundredths of a second really matter? In the real world, no. But in terms of image, they matter a great deal. Tesla garnered an enormous amount of valuable publicity from the Motor Trend story, and subsequently many 1/4 mile world records being set in a P100D.

Dodge has now responded to the marker laid down by Tesla. Starting this fall, it will offer a special edition of the Dodge Challenger SRT called the “Demon”. Dodge says it can scamper to the magic 60 mile per hour mark in 2.1 seconds, which will allow it to claim the title of quickest production car in the world.

The Demon features a great honking beast of a V8 engine topped with an enormous supercharger and compound intercooling. The Demon engine has 808 horsepower and 717 lb-ft of torque when running on 91 octane pump gas. Put 100+ octane racing fuel in the tank and it’s capable of 840 hp and 770 lb-ft of torque. There’s a big button on the dash the driver can push to change the engine mapping in order to extract maximum power from the racing gas.

The Demon comes from the factory with a driver’s seat and a two speaker stereo. It has almost no sound insulation and no carpeting. The car has smaller brakes and hollow antiroll bars to save weight. If the customer really needs a passenger seat, one can be added for $1 when the order is placed ($1,160 if purchased later). A back seat is available for another $1. A 19-speaker sound system can also be specified.

The Demon is the result of a two year campaign by a small team of 25 Dodge engineers. Compared to the engine in the Hellcat, the Demon’s power plant has 97 new parts including a new crankshaft, new connecting rods, new pistons, a new steel camshaft, and a new valve train. A larger supercharger is fitted and boost pressure is raised from 11.6 psi to 14.5 psi. The engineers also altered the software that controls the eight speed automatic transmission to add a transbrake function. In Drag mode, it allows the engine to build power while the car remains stationary until a flick of the paddle shifter unleashes the beast. 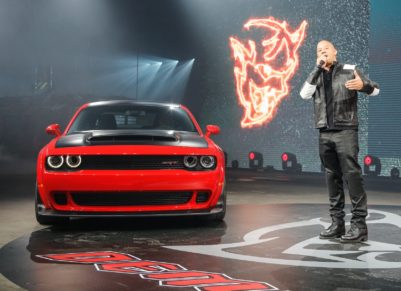 “Sometimes you need to ignore the data, disregard the focus groups, and build a car that can define itself,” says Dodge President Tim Kuniskis. “A lot of halos don’t have the greatest business cases.” The halo effect the Hellcat did not go unnoticed in the Dodge board room. While sales of the Hellcat were minimal, orders for the Scat Pack, a special appearance package comprised of stripes, stickers and decals, exploded. 17% of Dodge Challenger buyers now opt for the Scat Pack, an idea that harks back to the muscle car days of the 1960’s.

The Dodge Demon may be a production car, but its numbers will be limited. Only 3,300 will be built — 3,000 for the US market and 300 for Canada. It is definitely intended for serious racers. It can be ordered with The Crate, a box full of go fast goodies that fits in the trunk and includes skinny wheels and tires for the front end on track day. It also contains a special air filter, a tire pressure gauge, and a leather bound manual with tips on how to go drag racing and pages to record data from each run.

There is no doubt the Dodge Demon is an awesome car with brutal acceleration. Its 0-60 run in 2.1 seconds has been verified. But as Motor Trend points out, that feat was achieved at a drag strip, where years of racing have coated the track surface with sticky rubber. The Tesla Model S P100D record was achieved on a public road. The Model S also seats 5 in supreme comfort and is just as happy taking the family to Easter dinner as it is performing banzai runs to 60. The Models S is also a zero emissions vehicle. The Dodge Demon? Not so much.

Still, bragging rights are all about one thing — being quicker than the other guy. Once the Demon hits the streets, we can expect P100D drivers to challenge the new Challenger. Let the Dodge Demon versus Model S drag racing videos begin!