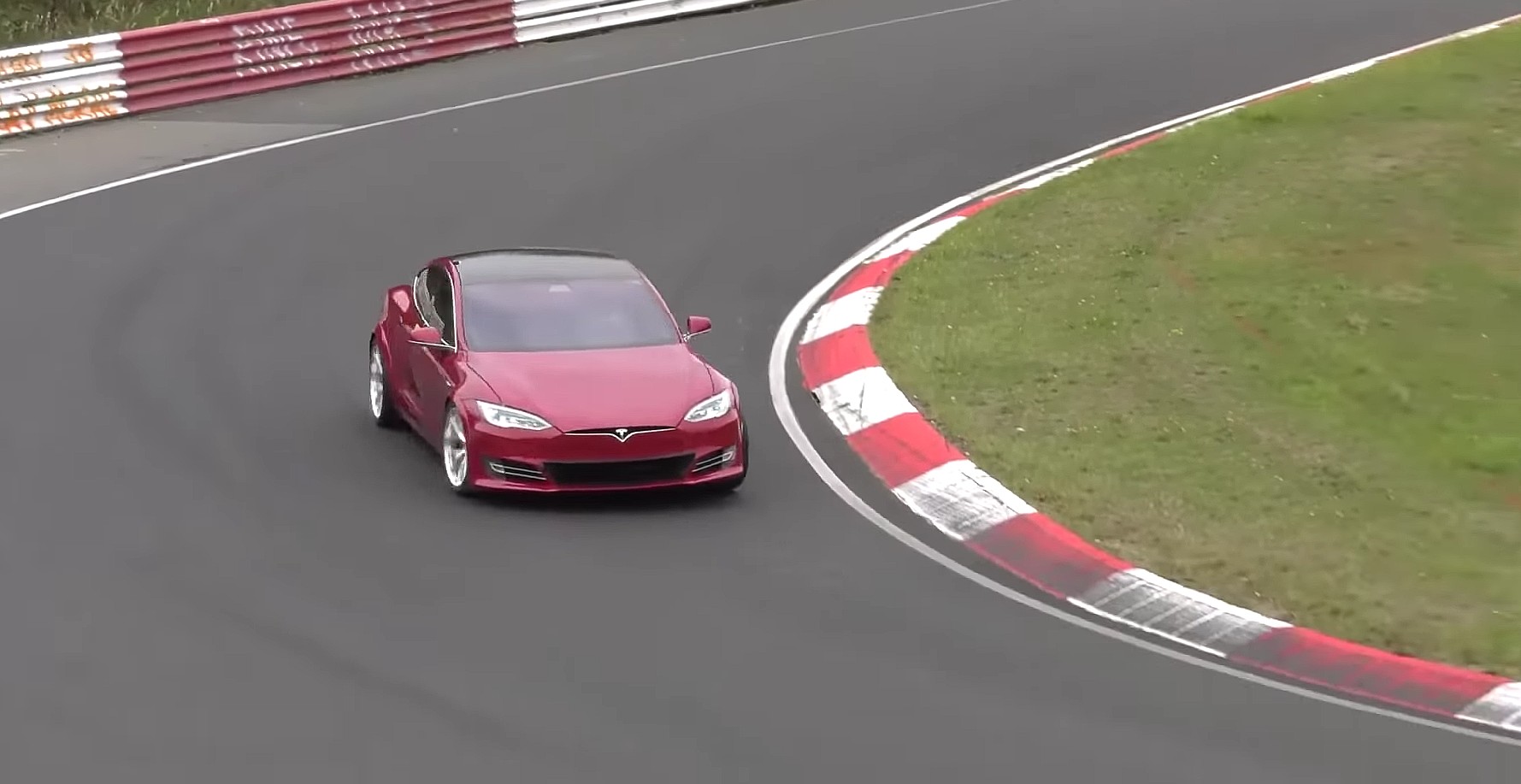 A Tesla Model S with 'Plaid Powertrain' in the Nurburgring. (Credit: autoevolution/YouTube)

Amid the increasing interest over the super mysterious Tesla Model S with “Plaid” powertrain that hit the Laguna Seca racetrack on September 11, CEO Elon Musk has announced that he expects the versions of the car with three electric motors to begin production in October or November of 2020.

Rumors have begun to circulate that a Model S prototype has already overtaken the Porsche Taycan’s record of fastest four-door production all-electric vehicle at the Nüburgring accord to German motoring magazine Auto Motor und Sport. The Taycan took to the Green Hell in late August 2019, and broke the four-door production EV record by completing a lap in just 7 minutes and 42 seconds and gaining the attention of Elon Musk, who said that the time was “great.” The focus is now getting the Plaid variant to the Nürburgring for testing and also getting it produced for those who are interested in purchasing the vehicle.

It’s a start. We expect these track times to be beaten by the actual production 7 seat Model S Plaid variant that goes into production around Oct/Nov next year.

“It’s a start,” Musk said when commenting on reports that a Model S prototype had beaten the Taycan’s time by 20 seconds. Musk is confident that Tesla can improve on its runs at the Nürburgring when the Plaid variant makes it to the famed German track and stated that “We expect these track times to be beaten by the actual production 7 seat Model S Plaid variant that goes into production around Oct/Nov next year,” the CEO added.

The next year could end up being Tesla’s biggest year yet, as they plan to begin production of the Roadster, Model Y and now the Plaid variant of the Model S. Many have speculated when the Plaid variant would be available for purchase on the Model S, but Musk has cleared the air today. While many people are patiently waiting for the release, other details, like price, power, and range specifications for the Plaid Model S have yet to be determined, but Musk did add that the variant would eventually be available on both the Roadster and Model X, and “will come later”.

The timed run of the Model S has yet to be recorded officially by Nürburgring reps and there is no public knowledge of a set date that the run will occur on. Though judging by Auto Motor und Sport‘s unofficial lap time for the Plaid Model S prototype in the German track, Tesla might very well end up leapfrogging its rivals in the EV sphere once more when its flagship sedan takes to the track for an official record attempt.