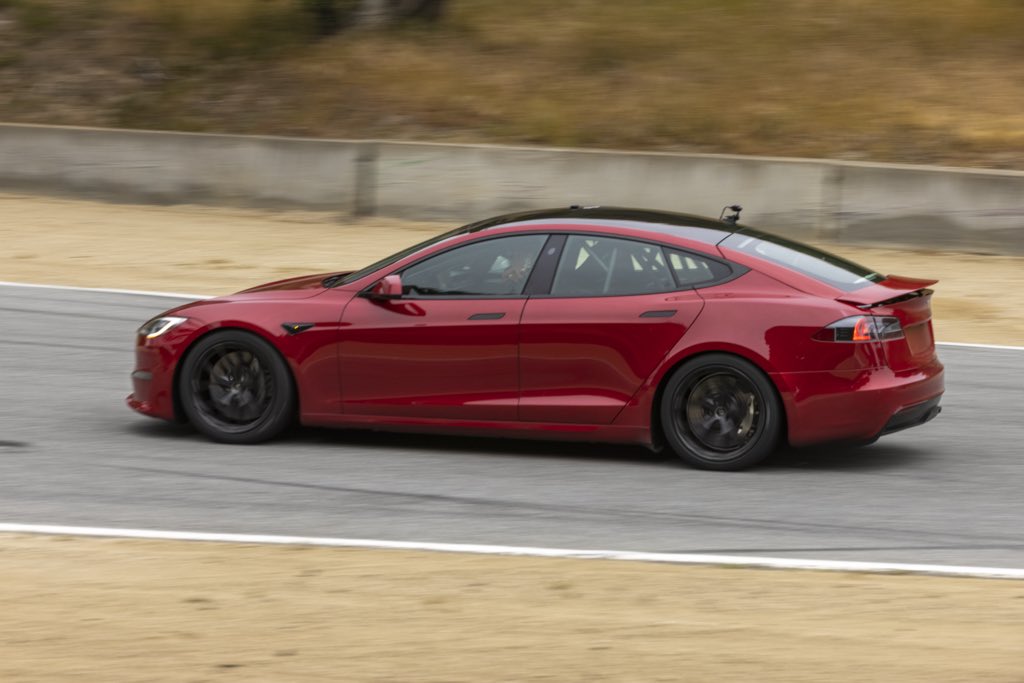 The Tesla Model S Plaid’s rumored record-setting performance at the Famoso Raceway in Bakersfield, California, was confirmed by Jay Leno, who was in attendance that day.

On May 13th, it was reported by DriveTeslaCanada that the Model S Plaid had broken the quarter-mile record that the Bugatti Chiron Sport set in 2018. The Bugatti completed the 1/4-mile in 9.4 seconds with a speed of 158 MPH.

According to the report, the Model S Plaid successfully completed the 1/4-mile at Famoso Raceway in 9.247 seconds at 152.09 MPH, Jay Leno said during the Spike’s Car Radio podcast.

“I’ll tell you what I did. I went up to Famoso Dragway in Bakersfield,” Leno said on the podcast. “And the Tesla Plaid…I drove by, and the NHRA guy was there to make it official. It turned a 9.247, at 152 MPH.”

Tesla lists the Model S Plaid’s top speed at 200 MPH and a 0-60 MPH time of just 1.99 seconds. Interestingly, the Model S Plaid also has a listed 1/4*mile time of 9.23 seconds at 155 MPH, basically confirming that the company’s projections are nearly spot-on.

The podcast was uncovered by EV enthusiast site The Kilowatts, who captured video of the Model S Plaid running spirited laps at the Laguna Seca Raceway in Northern California just days after the 1/4-mile record was set at Famoso Raceway.

“We’re talking a four door car with the air conditioning on!” –@jayleno

The Model S has always been Tesla’s highest-performance vehicle. After the Ludicrous Mode available on Performance Model S vehicles didn’t seem to be what CEO Elon Musk’s highest expectations were, he took it a step further by introducing Plaid Mode in late 2019. The vehicle first was spotted at the Nürburgring in Germany, where Tesla enthusiasts feasted their eyes on a massive rear diffuser, wide body style, and noticeably quicker powertrain.

In January 2021, Musk and Tesla announced that the Plaid and Plaid+ Model S sedans would be available for ordering. While the Model S Plaid+ won’t hit production until next year, the Model S Plaid is set to begin deliveries on June 10th with a dedicated delivery event at the Tesla Fremont factory.

Leno has been involved with Tesla and Elon Musk on several occasions. The two first met when the original Tesla Roadster was a subject of a Jay Leno segment, and, most recently, Musk took Leno in a ride in the Tesla Cybertruck for an episode of the MSNBC show “Jay Leno’s Garage.“

The podcast is available here, and Leno’s segment on the Model S Plaid occurs at around 13:50.