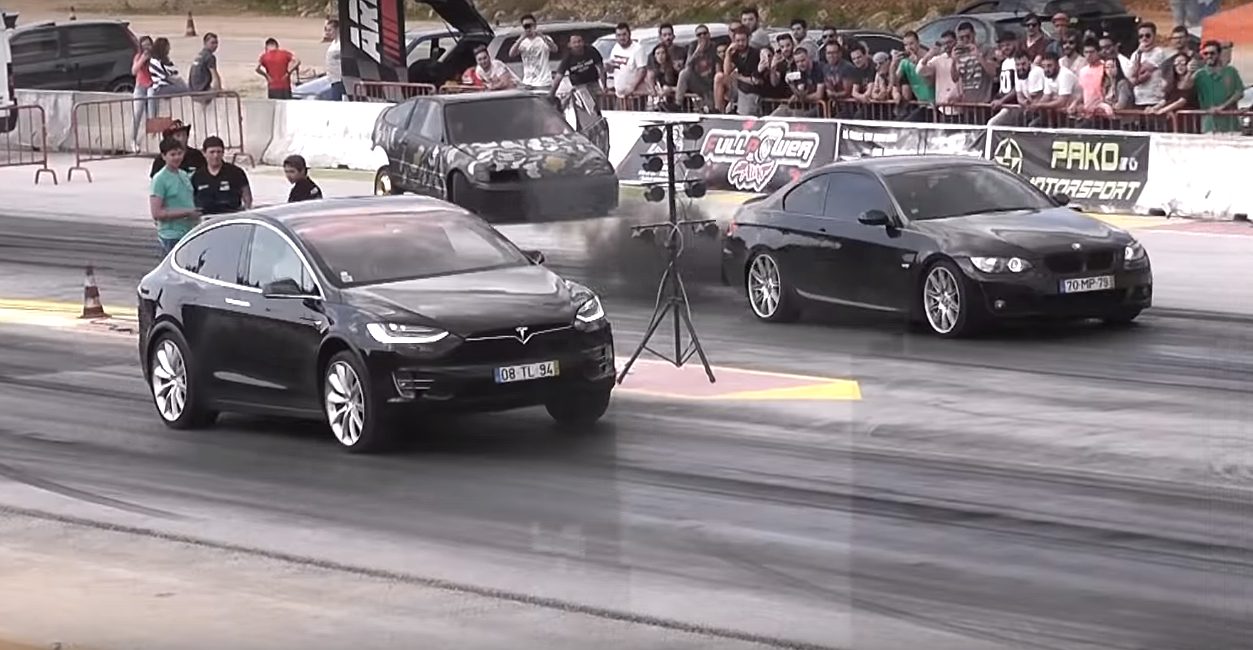 There’s just something strangely gratifying about seeing a coal-rolling, smoke-belching vehicle get completely dominated in a drag race. Thanks to a recent YouTube drag race video from Portugal, we can watch this exact scenario play out, courtesy of the drag racing chops of the Tesla Model X P100D.

The drag race video was uploaded by YouTube’s CrAzYDr1veR channel, a Portugal-based auto enthusiast group that covers races and sleeper builds. The race was held at a local drag strip, where the Model X P100D faced off against ICE-based racing-modified cars. One of its opponents was a diesel-powered BMW coupe, which, based on the video of the race, was specially modified to roll coal.

Rolling coal is the practice of intentionally blowing out excessive amounts of smoke from a diesel-powered vehicle. This is done by modifying a car’s motor to increase the amount of fuel entering the engine. Some rolling coal enthusiasts take the modifications even further, removing the particulate filter of their diesel vehicles to increase the amount of smoke emitted by their cars.

The unhealthy practice originated in the United States’ Truck Pulls, a rural motorsport event that involves diesel pickup trucks pulling a weighted sled, as noted in an expose from Vocativ back in 2014. To get an advantage in the competition, some drivers began modifying their trucks so that vast amounts of fuel are dumped into the motor.

While this results in a boost in the trucks’ horsepower, speed, and torque, it had the aftereffect of emitting large clouds of black smoke when the accelerator is pressed. The trend caught on, and over the years, a subculture was born, with the practice even evolving into a form of protest among anti-environmentalists.

When faced with a green powerhouse like a Tesla Model X P100D, however, how will a coal-rolling BMW fare? Not so well, apparently. In the recent video, the diesel-powered coupe could be seen rolling coal as soon as the light turned green. The harder the BMW accelerated, the more coal it rolled. Such a display of diesel-powered bravado, however, didn’t matter much, as the Model X immediately dominated the race. As could be seen in the video, the all-electric luxury SUV established its lead early on, thanks to its electric motors’ instant torque, and it just kept pulling until the end of the race.

Apart from the coal-rolling BMW, the recently uploaded video also features the Model X P100D battling two souped-up hatchbacks. Just like the diesel-powered coupe, however, the two hatchbacks fell against the all-electric SUV, despite the second one getting a jump on the Model X off the line.

Earlier this year, DragTimes’ Model X P100D set the world record for the electric SUV before completely walking all over a 707 hp Jeep Trackhawk in the quarter-mile. The Model S P100D, the Model X P100D’s sedan sibling, recently battled a fully loaded Dodge Demon in a quarter-mile race as well.

Watch the Model X P100D race a coal-rolling BMW coupe in the video below.