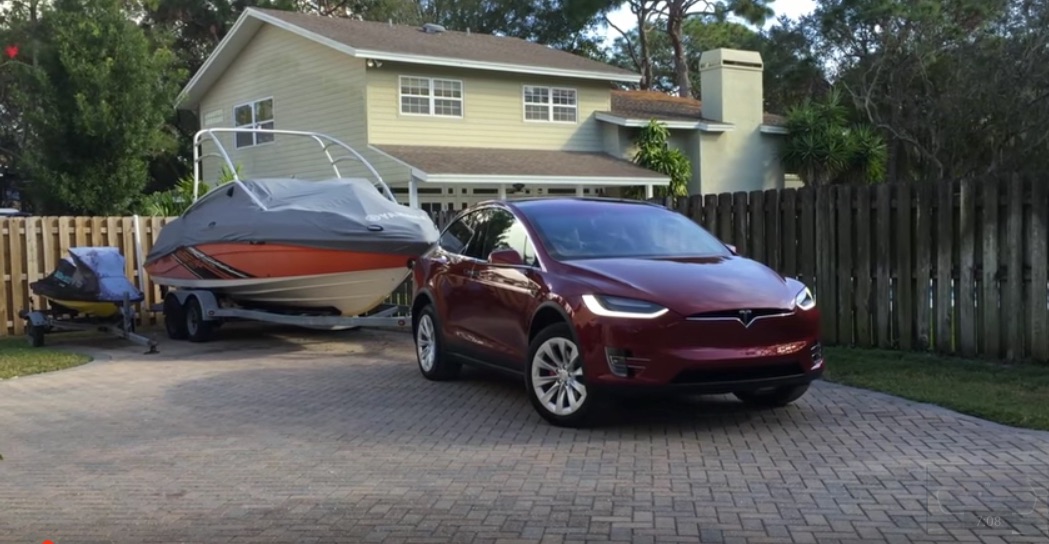 The Model X is a great tow vehicle — quiet, comfortable, and powerful. But its range is severely reduced when towing a heavy load. Actual range may be less than half that available in normal driving.

Tesla Model X owner Max Kennedy took full advantage of the optional tow package by towing his 4,850 lb. boat and trailer to Tampa Bay, FL on New Year’s Day. He reports his Model X makes an excellent tow vehicle — quiet, comfortable, and powerful as demonstrated in the last segment of the video (6:51 min. marker) where Kennedy effortlessly accelerates from 55 mph to 80 mph within seconds. However, the ability to tow a near 5,000 payload doesn’t come without a cost, and in this case it’s energy consumption.

With a full charge at the beginning of the trip, Kennedy observes the amount of energy consumption by comparing the Tesla’s Instant Range reading with the change in speed and surface street elevation. The Model X  consumed an average of 575 watt-hours per mile while traveling at 55 mph in steady state cruising on level roads. Not surprisingly, the amount of energy used drastically increased when the 5,441 lb. Model X plus the additional 4,850 lb. boat and trailer combination was faced with an incline and a slight increase in speed, to the tune of 800 – 900 Wh/mi.

At that rate of energy consumption, the range impact when towing could be cut by 60% or more. Reaction to the video on Reddit was immediate. TheSpocker posted, “That’s a huge hit on range. Yikes. I mean, we all knew it would be this way. Aerodynamics are a huge part of Tesla design and that boat wasn’t designed with those concerns. It’s just unfortunate that towing hurts range so much. I hope that most owners of the X can still make it between superchargers while towing on their long-haul routes.”

He continued, “I love Tesla’s. I love electric cars. We still need to recognize that the range when towing on an electric is almost laughable. That’s not a big problem for most people who don’t tow, but it has to be overcome for electric vehicles to directly compete with ICE vehicles.”

The question then becomes, Can the Tesla Model X really compete with conventional trucks or SUVs as a tow vehicle? The answer really depends on a number of factors. If there is no charger available where you are going, your destination may need to be within 50 miles of home or a roundtrip of 100 miles from the originating charging facility. “The problem is it’s more or less irrelevant with an ICE. A truck might have half the range, but it takes a whole two minutes to fill up and keep going.”, writes another user.

In other words, if you are towing a heavy payload up into the mountains or in areas where there’s prolonged inclines (ie. Flagstaff, AZ to Moab, UT), the Model X may not have the range to get you there unless the distance between Supercharger stations are shortened. Some people will have no problem with frequent charging along the way, but for some, towing using an internal combustion engine might still be king.