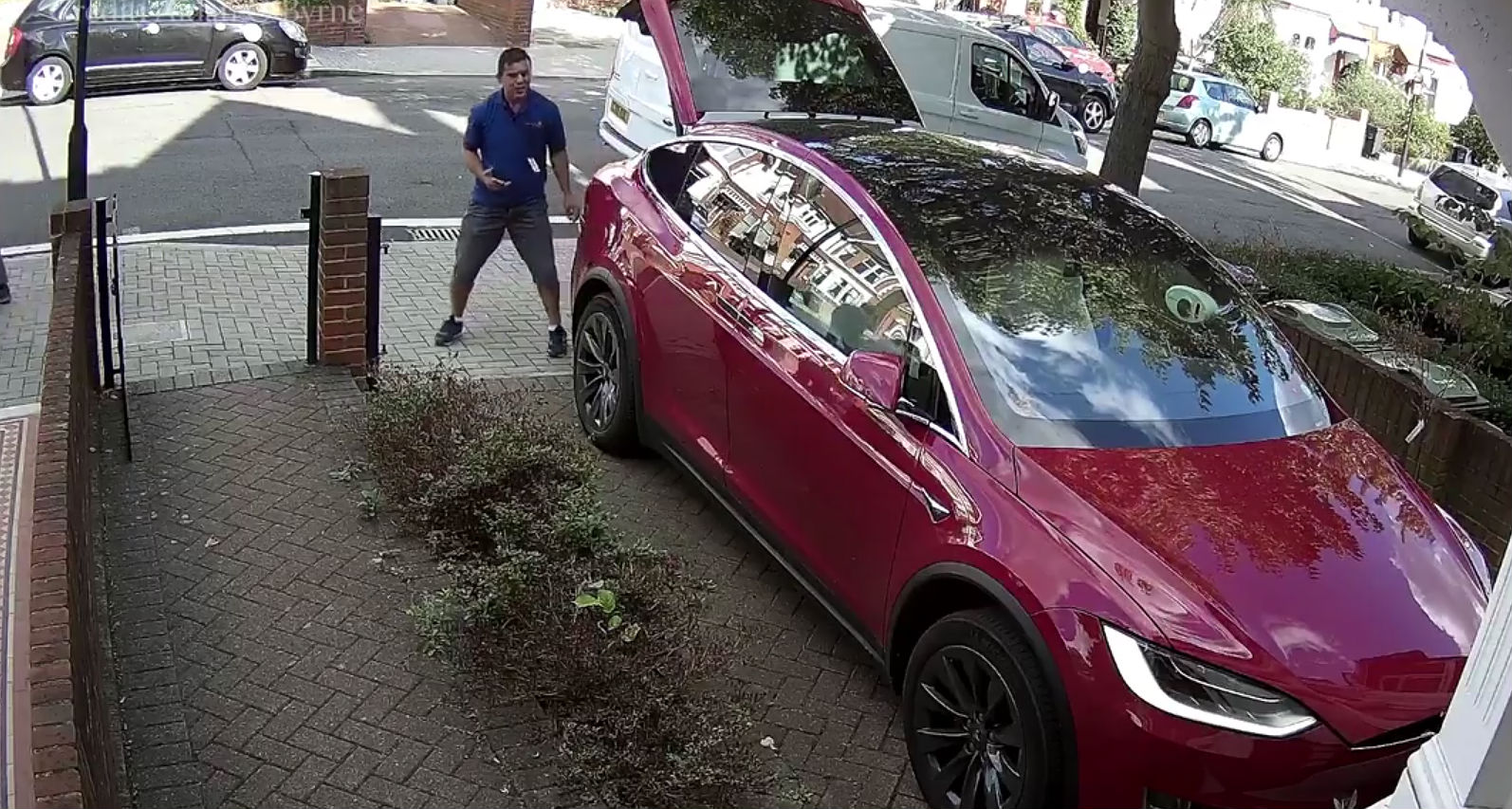 Tesla’s premium electric cars are filled to the brim with technology, so much so that the vehicles are frequently compared to Apple and its ecosystem of products. Over the years, Tesla has vastly improved its vehicles, adding new convenience and safety features through free, over-the-air updates. One such feature was utilized by a Model X owner in London, when an Amazon package arrived while no one was home.

Aidan O’Byrne was at his office desk job in London’s financial district, which was around seven miles away from his house, when the Amazon order arrived. Since there was no one at home to receive the package, he opted to employ some of his all-electric SUV’s unique features to turn the Model X into a makeshift, technologically advanced package locker.

Communicating through a video doorbell, Aidan requested for the boxes to be placed inside the vehicle. The Model X owner simply used the Tesla app to open the trunk remotely, closing it when the packages were inside. A clip of his interaction with the Amazon employee, which has been uploaded on YouTube, even featured a lighthearted moment showing the delivery man doing a double-take when he was instructed to place the packages in the trunk of the parked SUV.

In a conversation with Teslarati, Aidan noted that he was ultimately able to remotely receive his package by using a series of applications. He was alerted of the delivery, for one, on his smartwatch, and he was able to communicate with the Amazon employee through a video doorbell. Most notable, though, was Tesla’s smartphone app, which allowed him to control his electric SUV from miles away.

The use of technology as a way to augment a vehicle’s features is now starting to become a mainstream movement. Amazon, for one, is testing a collaboration with Volvo that would allow the e-commerce giant to deliver packages directly to a vehicle’s trunk. Such features and services are not really a necessity, but that being said, there is no doubt that such features are a great way to address some first-world problems.

The Model X P100D is Tesla’s top-of-the line SUV, boasting supercar-beating acceleration when launched in Ludicrous Mode. The vehicle, which is particularly iconic due to its Falcon Wing Doors, is known to “convert” even the company’s staunchest critics. Just recently, Detroit veteran and longtime Tesla critic John McElroy of Autoline TV got to experience a Model X for the weekend, thanks to a friend who loaned him the vehicle. After he returned the SUV, McElroy noted that he ended up drinking the Tesla “Kool-Aid,” and he is now a believer of the company’s electric cars.

Even longtime auto host Jeremy Clarkson, who was previously sued by Elon Musk due to the way Top Gear portrayed the original Tesla Roadster in a segment, seemingly got a change of heart after driving a Model X P100D. In an episode of The Grand Tour Season 2, Clarkson could be seen grinning like a child as he beat an Audi R8 in the quarter-mile, which he capped off by engaging the Model X P100D’s Celebration Mode Easter Egg. Clarkson also dubbed the vehicle as “fabulous.”

Watch the Model X P100D get utilized as a remote package locker in the video below.