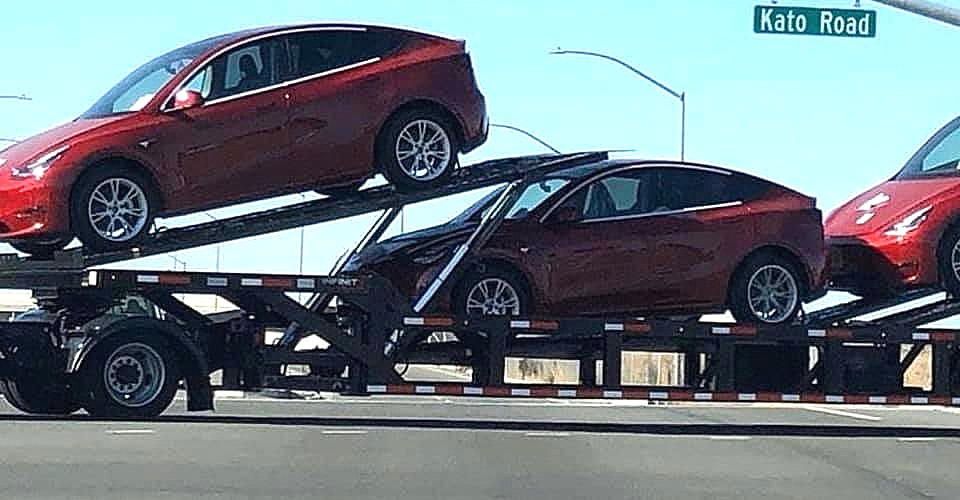 A number of red Tesla Model Y pre-production units have been spotted being transported by a carrier near the electric car maker’s Fremont factory. The vehicles were photographed at Kato Rd., which also hosts a large Tesla facility.

The image of the Tesla Model Y units was posted and shared on Twitter by owner-enthusiast Trevor Page of Tesla Owners Online, who mentioned that the electric car maker’s Kato Rd. facility is also rumored to be a location where the company hand-built the first Model 3 pilot vehicles.

A look at the picture of the Model Y sighting reveals several interesting details about the upcoming all-electric crossover SUV. The vehicles were painted red, similar to the unit that Tesla brought over and showcased during the 2019 Annual Shareholder Meeting, though the pre-production units in the recent sighting did not seem to be chrome deleted.

Granted, the Model Y in the Kato Rd. sighting still had black door handles, but the cameras of the vehicle and its door trims appear to be chrome. These chrome trims might simply be a wrap, of course, but they do hint at potential non-chrome-deleted options for the Model Y when it gets released.

Also noticeable in the recent Model Y sighting is the wheels that were installed on the vehicles. The wheels of the pre-production units that were being transported featured a design that has not really been spotted before, though their form seems to suggest that the wheels are designed to be fitted with Aero covers.

Prior to the recent sighting, what appeared to be a release candidate of the Model Y was spotted road testing near Palo Alto, CA. More detailed pictures of the vehicle later emerged online, and they revealed that the Model Y was fitted with blacked-out wheels that were reminiscent of the 19″ Power Sports Aero Wheels that comes standard with the China-trim Tesla Model 3 Performance.

The emerging wave of sightings of the Tesla Model Y bodes well for the vehicle’s impending production. Elon Musk, after all, stated during the vehicle’s unveiling last March that the Model Y will enter production in the Fall of 2020. Yet, despite this rather conservative timeframe, reports eventually suggested that Tesla is already preparing the Fremont factory for Model Y production. Even Gigafactory 3 in China, which is intended to produce affordable versions of the Model Y, has reportedly entered the production phase.