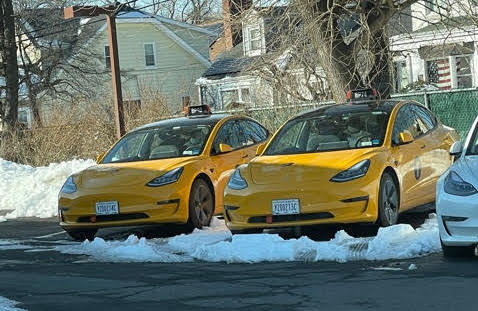 New York’s fleet of Tesla yellow cabs seems to be growing, with recent photographs around the city showing the presence of more Model 3 taxis. This was despite one of the Tesla Model 3 yellow cabs meeting an accident in late January.

In early November 2020, New York City’s first Model 3 taxi cab caught the EV community’s eye for its unique features and potential. The Model 3 yellow cab was the spiritual successor of the Nissan Leaf, which briefly served as official NYC taxis from 2013 to 2015 as part of the city’s efforts to embrace sustainable transportation.

Unfortunately for the first Tesla Model 3 NYC yellow cab, the vehicle was involved in an accident on Long Island in late January. Images of the vehicle post-accident revealed that a good portion of the Model 3’s left rear quarter panel was torn off during the incident. The driver’s side rear wheel was also cracked.

Later images showed the Tesla Model Y taxi cab being transported to what appeared to be a local garage. By then, it seemed like the Model 3 yellow cab would be out of commission for a while. If recent photos are any indication, however, it appears that more Model 3 taxis are now on the way, and some of them are already being deployed to the city.

A photo submitted to Teslarati by one of our readers showed two other Tesla Model 3 yellow cabs parked side-by-side in White Plains, NY. Other social media photos show Tesla Model 3 taxis with different license numbers from the cab that crashed in January driving around New York. These suggest that the number of Tesla yellow taxis in New York is growing, at least to some degree.

Before the crash of the Model 3 yellow cab in January, Rami, the driver of the all-electric car, noted that the Tesla is definitely different from other cars he has driven at work. And while some aspects of the vehicle, like its flush door handles, present a learning curve for some commuters, the driver noted that the Tesla attracts a ton of attention, with people even taking photos of the Model 3 during his daily rounds.