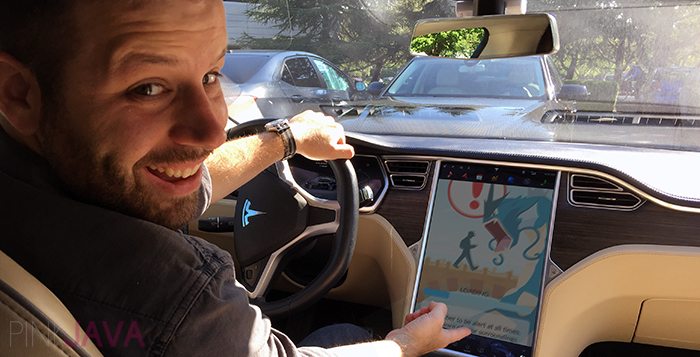 The Pokemon GO craze has swept the world with the latest victim being Model S owner Jeff of Pink Java Media. The addictive smartphone game has players from all walks of life converging on random destinations, each with hopes of capturing digital Pokemon creatures in an augmented reality setting.

Jeff decided to take his obsession of the game to the next level by hacking his Model S to be able to catch Pokemon directly from the center touchscreen. He doesn’t describe how this was done, beyond the mention of it requiring an ethernet cable, but we can see from the animated gif that the hack appears to have succeeded. Jeff can fling Pokeballs directly from the capacitive-touch Tesla center screen.

Though the game loads in Jeff’s Tesla and operational, there’s some quirks that need to be done in order for the game to be playable. For one, the vehicle needs to be in reverse since the rear camera is used for setting the augmented reality backdrop when catching Pokemon.

Jeff tells Pink Java, “It makes for quite a challenge, I almost backed over a Rattata!”

This isn’t Jeff’s first rodeo when it comes to hacking. He previously hacked his home to alert him of incoming emails through the blinking of home lights. Other hackers, most notably Tesla white hat hacker extraordinaire Jason Hughes, have revealed upcoming features that Tesla has yet to announce including the reveal of a P100D badge leading to widespread rumors that a 100 kWh battery pack will be arriving in the near future.

So what’s next for Jeff? “Tinder” he tells Pink Java with a smile. “Going to see if I can swipe right with my turn signal.”

Updated: Jason Hughes has denounced the authenticity of this ‘hack’ stating that the Tesla’s rear cameras are not accessible by the processor, which we read as meaning it’s impossible to run Pokemon GO in the capacity seen in the above animation. Jason tells us,

“Without even going into other aspects, the biggest giveaway is that the car’s cameras (rear on all, front on AP cars) isn’t actually connected to or accessible by the processor in any way.  Specifically, the rear camera works via an FPGA sitting between the display and the actual physical screen connection.  When the camera image is displayed the software on the car simply displays a window with a slightly off-black color filling it.  The FPGA then picks up on this color key and overlays the camera right on to the display.  There is absolutely no way to pipe video into the processor for anything AR like that.  (The backup lines are drawn in a different color, so aren’t overwritten by the FPGA.)  Also the cam isn’t scalable to full screen.

I’m sure I could rip this apart even more, but suffice it to say it’s fake.”

And here’s the update from Pink Java’s editor.

“August 1, 2016, 9:50 am Editors Note: This was an experiment to see if we could start a discussion about a story’s validity. Writing in the style of  The Onion, we left a few clues along the way that this was a parody. Although we would love to play Pokemon GO with a Tesla, sadly, we cannot.”