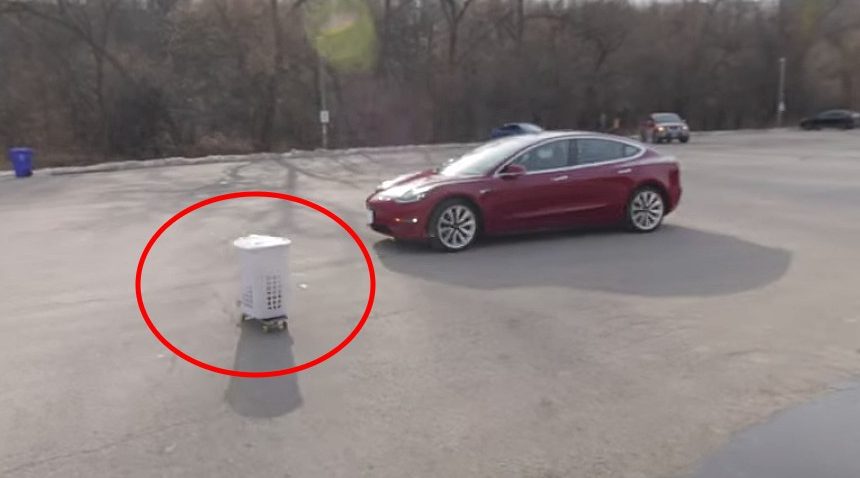 Rooke performed a separate Smart Summon test in mid-November, where he put the software through its paces with an intense trap that would summon the vehicle into a river.

While Rooke noted his first test as helpful in terms of teaching him how well the Summon software works, he wanted to take it a step further. “I went back for another round of testing, I brought a bunch more objects with me, but this time, I had a twist,” Rooke said. “I wanted to see how a Tesla might react when the objects presented in front of it, all these obstacles, were moving.”

In the latest test, Rooke built a makeshift shopping cart with a skateboard on top of a laundry basket. Rooke used Summon’s “GO TO TARGET” button to have his Model 3 move in a straight line. While it was moving, he pushed the shopping cart in front of the vehicle. His Model 3 successfully recognized the approaching obstacle as it came closer to the driver’s side front quarter panel. In a second test of the shopping cart, the Model 3 once again successfully avoided the obstacle. It is safe to say that if this were a real shopping cart in a grocery store parking lot, colliding with it would do some cosmetic damage to the car’s exterior. Summon’s ability to avoid this object is beneficial for Tesla owners as it could save money in the event of a freely-rolling shopping cart.

The next test was a series of long, cylindrical balloons that resembled a tree branch. Rooke attached these to a string and stood far away from the car. As the Summon operated Model 3 recognized these balloons, it stopped with plenty of room to spare.

The more interesting tests were with basketballs and soccer balls. “We are going to do two tests, a bounce test…and then we’re just going to do a rolling test afterward to see what the sensors pick up,” Rooke said. The car did not recognize the basketball on the first bouncing test, but did see it on the second attempt. While the car made contact with the basketball, it did successfully stop immediately afterward.

The rolling test of the basketball proved to be where Summon is in need of improvement. The vehicle’s sensors did not recognize the ball, ran over it, and popped it. Rooke subsequently tested other balls of smaller dimensions, but they yielded the same results.

Impressed by the performance of Summon when confronted with the shopping cart, Rooke shared some thoughts at the end of the video. “Smart Summon will stop for large obstacles that are moving even if they happen to come from the side of the car,” Rooke said. “If there is a rogue shopping cart in a mall parking lot, you do not want your car driving into it. You want your car to stop. That was the correct decision.” When talking about the basketball test however, Rooke certainly feels that a ball of that size should be recognized by the vehicle’s sensors, and it is evident Tesla could use some improvement in this category. “Imagine a toddler crawling behind a car or a small animal crossing in front of the path of the car. Those are things that you want the car to stop for and recognize,” he added.

Noting that the previous test did display that it recognized small pylons, it is not correct to assume the car’s sensors do not recognize them at all. It is more reasonable to assume that the feature just needs to be improved upon. Judging on Tesla’s frequent software updates, the company will likely confront these concerns and do what it can to fix them.

You can watch Kevin Rooke’s second Smart Summon test below.