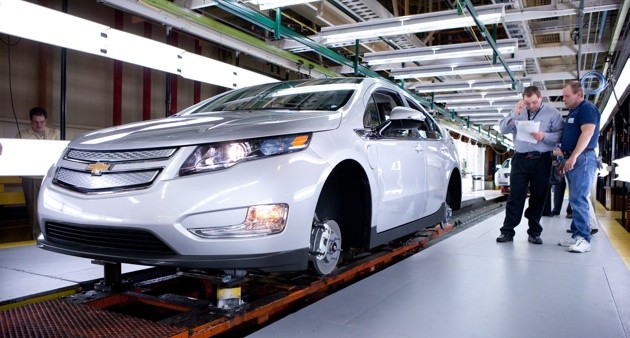 Ford and GM have claimed they could build a Tesla-beater as of late, but whether this holds any merit or something to be scoffed at remains to be seen.

Although we can theoretically see this happening much further down the road, as battery technology matures and EVs as a whole become the norm, the reality is still not that clear. Ford has certainly shown in the past that it can be a competitive threat when they pour enough money into an endeavor. Such is the case in the early 1960’s when Ford beat its Ferrari rivalry with the legendary GT40. However, a mass-production, consumer viable EV with long range capabilities is exponentially more difficult to execute on – something Elon Musk has long said. Ford’s ‘Power of Choice’ strategy was designed to give consumers a choice of powertrain ranging from gasoline engines, hybrids, plug-in hybrids, and full battery electric vehicles. Unfortunately, the only battery electric vehicle Ford offers is the Focus Electric. As to deciphering Ford’s Tesla-beater claim, the devil is in the details. Ford claims it is capable of making a bigger electric sedan than the Focus Electric. Ford Motor Company CEO, Mark Fields speaks about the Tesla Model S: “We drove it. We took it apart. We put it back together and we drove it again.” Ford could feasibly use the Fusion global platform and turn it into an EV. The problem lies not in the platform, but in the choice of battery and assembly. GM has also come out to boldly claim that it can offer Tesla a competitor for the upcoming Model III, according to HybridCars. Reportedly, a 2016 $30,000 range-extended GM car will benefit from improved batteries through lessons learned from its Voltec platform. But bare in mind that GM just revealed its much improved next-generation Volt will sport a larger gasoline powered onboard generator. Did you catch it? GM’s Tesla-beater is an extended range electric plug-in hybrid (PHEV). GM feels Tesla’s well educated EV buyers might be swayed with a PHEV, but we feel this would be better competition for the BMW i3 Rex, extended range EV than a battery electric Tesla. C’mon guys, let’s compare apples to apples.

GM and Ford Versus the Tesla Motors Philosophy

It is this type of news that keeps us writers writing, but the real comparison is not in powertrain platforms, but in design philosophies. Tesla designed its Model S completely in-house, with very little outsourcing, including the battery pack assembly. Detroit carmakers design their platforms and outsource most parts. Carmakers still treat battery assembly and the final pack as an outsourced commodity, unlike Tesla Motors. That is the crucial difference.

At this stage, the famous Gandhi quote comes to mind: “First they ignore you, then they laugh at you, then they fight you, then you win.” Whether Ford and GM can offer a Tesla-beater besides saying they are capable remains to be seen beyond quotes.