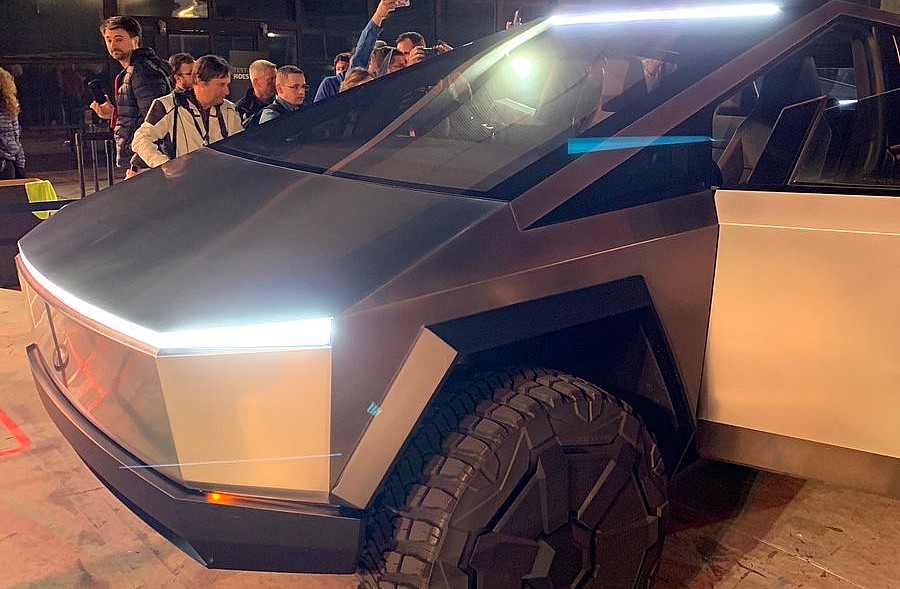 True to Elon Musk’s words, the Tesla Cybertruck is a polarizing vehicle. Unapologetically futuristic and featuring a design straight out of a sci-fi movie, Musk’s Blade Runner pickup definitely looked the part. And just as expected with such a unique vehicle, Wall Street’s Tesla skeptics are not impressed. But just as interestingly, the Cybertruck seems to be gaining some support among potential buyers, many of whom proved impressed with the vehicle’s utility and price.

Cowen’s Jeffrey Osborne, who has an Underperform and a $190 price target on Tesla stock (NASDAQ:TSLA), stated that the unveiling will be remembered for its “Armored Glass fail,” referencing the time the pickup’s side windows cracked after a metal ball was flung at it. “In a night to be remembered for the Armored Glass fail, Tesla’s Cybertruck reveal will likely disappoint current pickup truck owners and we see the vehicle remaining a niche and not a mainstream product… Musk has been enthusiastic about his Blade Runner inspired design for months, but we were still surprised how futuristic he went with this one and believe it may shatter his dreams,” the analyst noted.

Credit Suisse’s Dan Levy, who also has an Underperform rating and a $200 price target on TSLA, remarked that despite the Cybertruck’s specs, it would not affect legacy pickup truck makers at all. “We saw multiple key takes post Tesla’s Cybertruck unveil tonight: 1. Models 3 and Y remain the ‘main event’ for Tesla; 2. We expect Cybertruck to be a lifestyle vehicle; but amid a highly radical design (unlike anything the industry has seen), it’s unclear to us who the core buyer will be; 3. Tesla tried to throw a lot of stones at the legacy pickups on the market, with Tesla highlighting advantages in durability, towing, payload, and 0-60. Yet we think the legacy OEMs can breathe a sigh of relief, as we don’t expect Cybertruck to encroach on large pickup share,” he noted.

Some analysts, such as Canaccord Genuity’s Jed Dorsheimer, who has a Buy rating and a $375 price target for the electric car maker, took a more moderate stance on the vehicle. In a statement to CNBC, the analyst noted that while the pickup’s appearance is polarizing, the vehicle’s price is a strong point. “The starting price point of $39,900 for the 250-mile-range, single-motor RWD design option was also a strong point as this positions the Cybertruck competitively in the middle of the lucrative truck market, with production expected in ‘late 2021.’ While the futuristic design may be polarizing, we are encouraged by the Cybertruck release and believe that along with the coming Model Y crossover SUV, Tesla will be able to address two key categories of the automotive market that it previously could not,” he said.

While even Tesla bulls such as Jed Dorsheimer are cautious about the Cybertruck, the vehicle actually seems to be capturing the interest of potential buyers online. There is no doubt that the Cybertruck’s design is polarizing, but its tech, the durability of its stainless steel body (as shown in the presentation’s sledgehammer test), and its sub-$40,000 base price make the vehicle a compelling alternative to the market’s gas-guzzling full-sized pickups like the Ford F-150. And this doesn’t even take into account the low running costs of an all-electric vehicle, or the Cybertruck’s features such as its 6.5-foot-long bed and adaptive suspension.

Overall, it seems that while the Cybertruck may have shocked a good portion of the internet when it was unveiled last night, potential customers of the vehicle are beginning to see just how bang-for-your-buck the pickup really is. There are very few trucks on the market, after all, that are as large as an F-150, but is quicker, stronger, safer, and better-equipped compared to its gas-guzzling counterparts. At less than $40,000 for its base version, a basic Autopilot-equipped Cybertruck is not a bad deal at all. And more and more potential buyers seem to be seeing it.