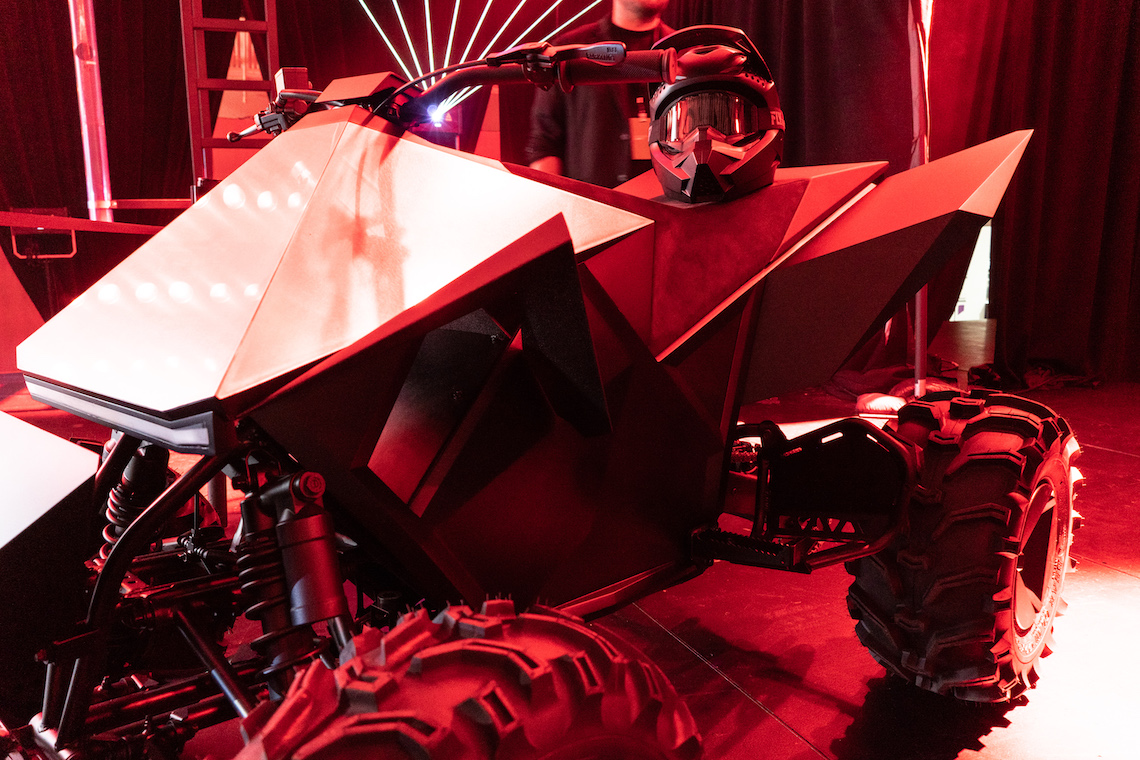 Tesla CEO Elon Musk shed some light on the company’s surprise all-electric ATV last night, stating that it would be available as an option for initial buyers of the recently-unveiled and polarizing Cybertruck.

Following the unveiling of the spectacularly unique Tesla Cybertruck on November 21 at the SpaceX rocket facility near Los Angeles, California, Musk revealed the company had designed an ATV that seemed to complement the new pickup. Details regarding the ATV are slim at the present time as the focus remains on the futuristic truck, which will be available in three different battery capacities that give the vehicle a range of 250+, 300+, and 500+ miles.

However, it is now known that the ATV will only be available for buyers of the Cybertruck, at least initially.

The ATV will be able to charge from the bed of the truck, an area that Tesla is referring to as the “vault”. During last night’s event, the rider of the ATV displayed the ease of access the four-wheeler had to the Cybertruck’s vault, easily maneuvering it onto the vehicle and plugging it in for charging.

While general and performance specifications are currently unknown, we can assume it will be Tesla’s goal to make the ATV competitive with some of the highest-performing off-road vehicles offered on the market, like the top-rated Can-Am Renegade X mr 1000R that starts at $15,149 . Tesla’s reputation of creating vehicles that outperform some of the most notable sports cars in the world has become a normal occurrence.

Tesla is presumably going after the outdoor market with the release of both the Cybertruck and its companion ATV. While the Cybertruck is a high-performance vehicle that will rival many of the world’s fastest sports cars in acceleration while rivaling pickup champs like the Ford F-150 in utility, Tesla’s pairing of a truck with an ATV seems to match the ideology that they are gearing up for the release other vehicles that are aimed at outdoor activities.

One example of this would be the upcoming Rivian R1T, a pickup truck designed for performance both off-road and not. As of now, the ATV remains a mystery for those interested, but if you want to get your hands on one, you will have to order Tesla’s newest vehicle, at least for the time being.