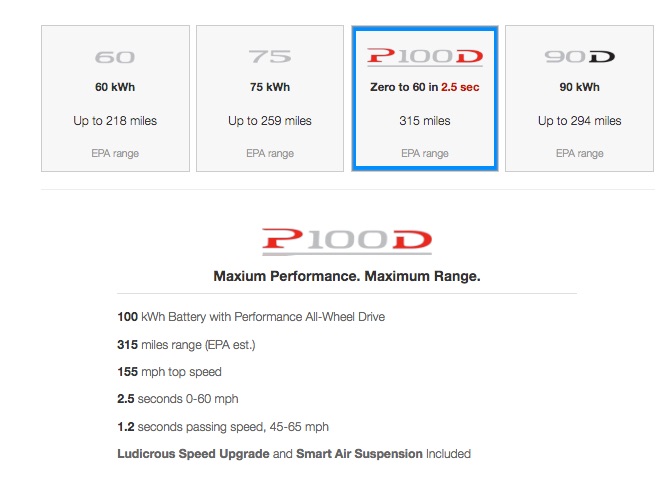 When Tesla announced that it had produced the word’s fastest accelerating production car – the P100D – through the use of a larger 100 kWh battery pack, in essence dethroning the previous king of the hill: the Model S P90D Ludicrous, existing P90D owners were naturally asking, can I upgrade to a P100D? And, how much will that cost?

The upgrade, unfortunately, won’t be an ‘unlockable’ over-the-air software upgrade similar to the business model that Tesla began employing earlier in the year when it provided owners of the 60D or 60 kWh Model S and Model X to upgrade to a longer range 75 kWh. Instead, the P100D Ludicrous upgrade for existing P90D Ludicrous owners will be an entirely new battery pack that comes along with upgrades to the wiring harness. The drivetrain of the vehicle will remain the same. The cost for the upgrade will set you back an additional $20k on top of the already pricey Ludicrous Model S and Model X, something Tesla admittedly refers to as an “obviously expensive vehicle”.

But with the expenditure to go even more ludicrous comes bragging rights knowing that you’ll be driving the fastest accelerating production car in the world. This not only strokes the ego, but will undoubtedly make for some spectacular Tesla drag racing videos, to come.

Oh, and did we mention you’ll be supporting the development of the Model 3?