Tesla CEO Elon Musk gave the world a glimpse of the first Model 3 production car over the weekend when he tweeted photos of the gorgeous electric sedan in black. One of the photos showed the Model 3 set in front of the large Tesla logo at the company’s Fremont, California factory and Supercharger site.

A video would soon follow, posted by TehBestGamer505 to YouTube, showing Musk’s serial number 1 Model 3 getting positioned for its first official photo shoot.

“Can you put it there?” asks the unidentified person seen in the video, as they direct the Model 3 driver to back “over the no crossing sign”.  “Oh yeah, that looks good now” says a member of the Tesla team responsible for shooting the first glamour shot of the car. 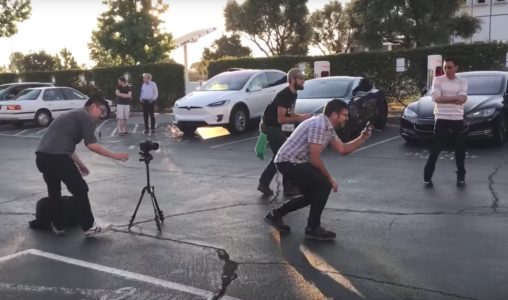 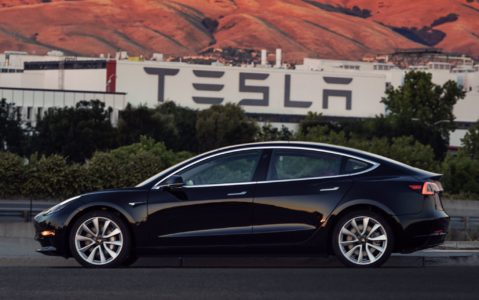 However, the biggest feature that viewers may not have noticed on the Model 3 is what appears to be a self-opening front door. Throughout the video, the driver in the Model 3 can be seen opening and closing the door on several occasions. Each time the door is seen opening with the same style of motion and at similar speed as Model X’s self-presenting front door. The sound of the motorized door hinge can be heard at roughly the 8-second mark of the video when the front door swings open to its maximum opening position – the same sound heard in Model X’s self-presenting front door.

Then, at the 48-second mark of the video, the driver can be seen effortlessly unlatching and opening the front door from within the driver’s seat with only their left hand. Though it appears that the unlatching of the front door is facilitated through a single switch, as we first revealed in our Tesla Model 3 hidden details story, the motion of the door hinge once again validates Tesla’s use of, likely, a motorized mechanism in the door similar to that of Model X. 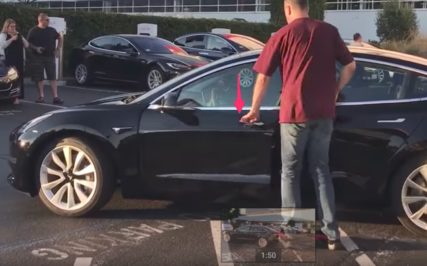 Finally, at the 1:32 minute marker of the video, the Model 3 driver can be seen pushing on the skinny front portion of the aerodynamic door handle to unlatch the door. The front door appears to swing open on its own while the driver seemingly waits for the door to self-open before entering. Again, like the Model X.

Watch the video below and let us know what you think.