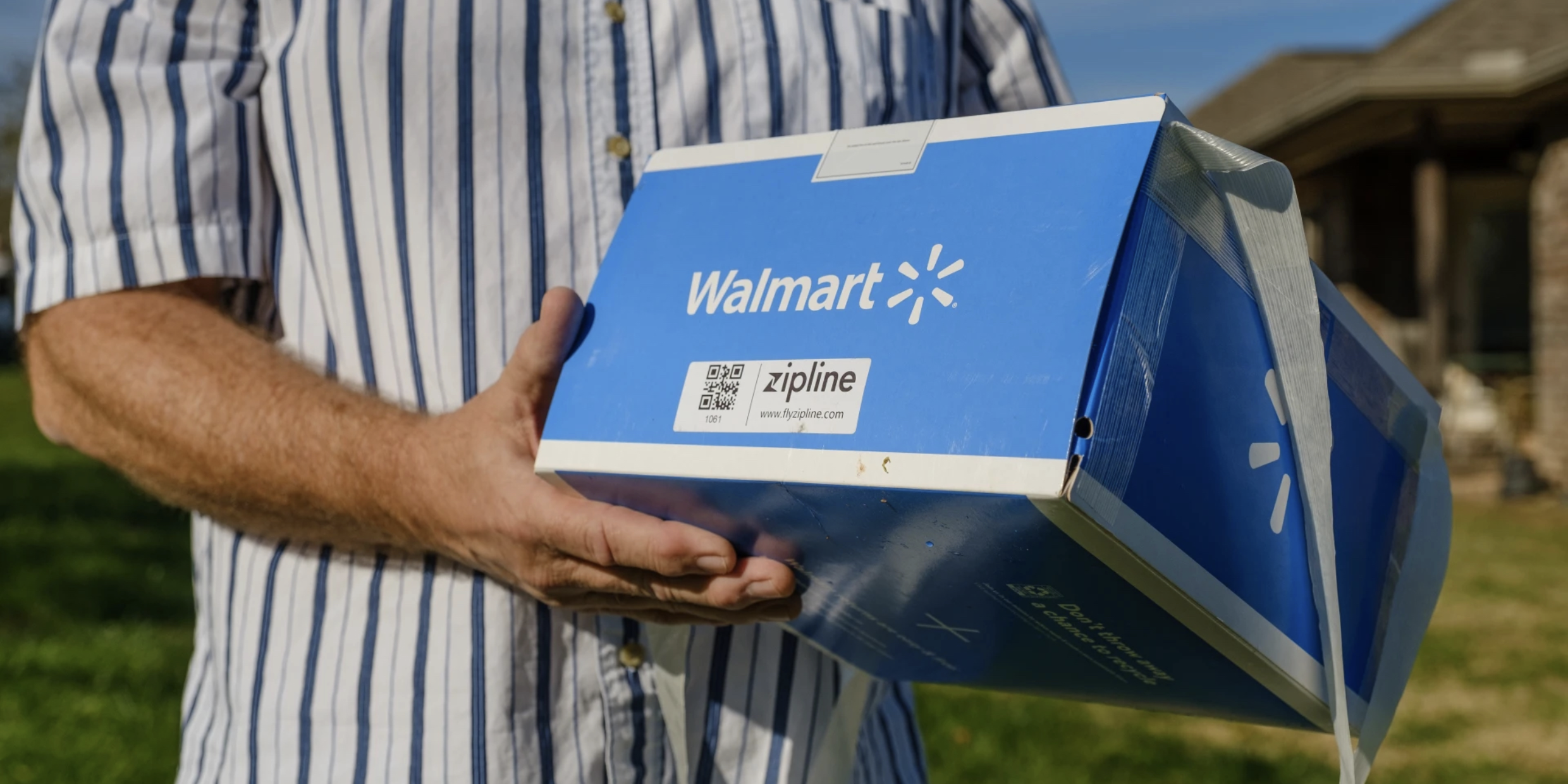 Walmart demonstrates how drones are the future of grocery delivery

This morning, a video posted on TikTok shows the Walmart drone delivery system in action.

As the battle for e-commerce dominance has escalated over the past few years, Walmart has taken to the skies to battle with Amazon to be the first to offer drone delivery of customer orders. Today, Walmart’s system was demonstrated and explained in a video on TikTok.

Walmart’s drone delivery system is being created in partnership with a company called Zipline, which designs and manufactures drones and their autonomous flying systems. The video, originally posted by user victorbravo248 on TikTok, shows a Zipline drone getting loaded with a package, being assembled on its launching system, and taking off.

Zipline’s drone is unlike the drones that many people have become familiar with. Instead of a traditional “quad-copter” design, it is more like a plane with a set of wings and two motors: one rear-facing and one forward-facing. As seen in the video, each drone can hold a single package, which is then dropped with a parachute as the drone flies over the customer’s house. The drone flies and lands autonomously and is expected to make several package deliveries daily.

Walmart is also working with competitor DroneUp which produces more traditional drone technology for package delivery using a quad-copter design. This is the more ideal design for dense urban areas where space and package delivery areas would be hard to come by.

According to Zipline, each drone has an operational range of 50 miles from any launch point and has already proven itself in nearly 500,000 commercial deliveries worldwide since 2016. One commercial delivery is completed every two minutes. The drone requires only basic infrastructure, including its launching device, landing tower, and an area for loading and assembling.

Walmart first secured its deal with Zipline in 2020, and since then, the program with Walmart and Zipline as a company have grown. Walmart is completing initial testing in its home state of Arkansas, and Zipline has expanded to numerous other sectors. Notably, Zipline now works to deliver health supplies and humanitarian aid to many countries in Africa.

“Zipline’s autonomous aircraft presents an incredible opportunity to offer customers an on-demand delivery option for the items they need now, such as a thermometer, non-prescription medication, or an emergency pack of diapers,” said Tom Ward, senior vice president of Last Mile Delivery, Walmart U.S. “Even more, Zipline’s aircraft can help provide immediate access to needed items for both hard-to-reach and at-risk populations, such as rural communities and elderly customers. By bringing this game-changing technology to the rural community of Pea Ridge, Arkansas, we’re continuing to look for ways to make shopping with Walmart convenient and easy – for everyone.”

Walmart has not specified when the drone delivery program will be expanded to other service locations. But if recent statements and Zipline’s recent approval from the FAA are anything to go by, it could be coming sooner than many would think. Furthermore, the drone program could likely aid Walmart’s aggressive sustainability push, only further incentivizing the company to make the program public sooner rather than later.

Walmart demonstrates how drones are the future of grocery delivery