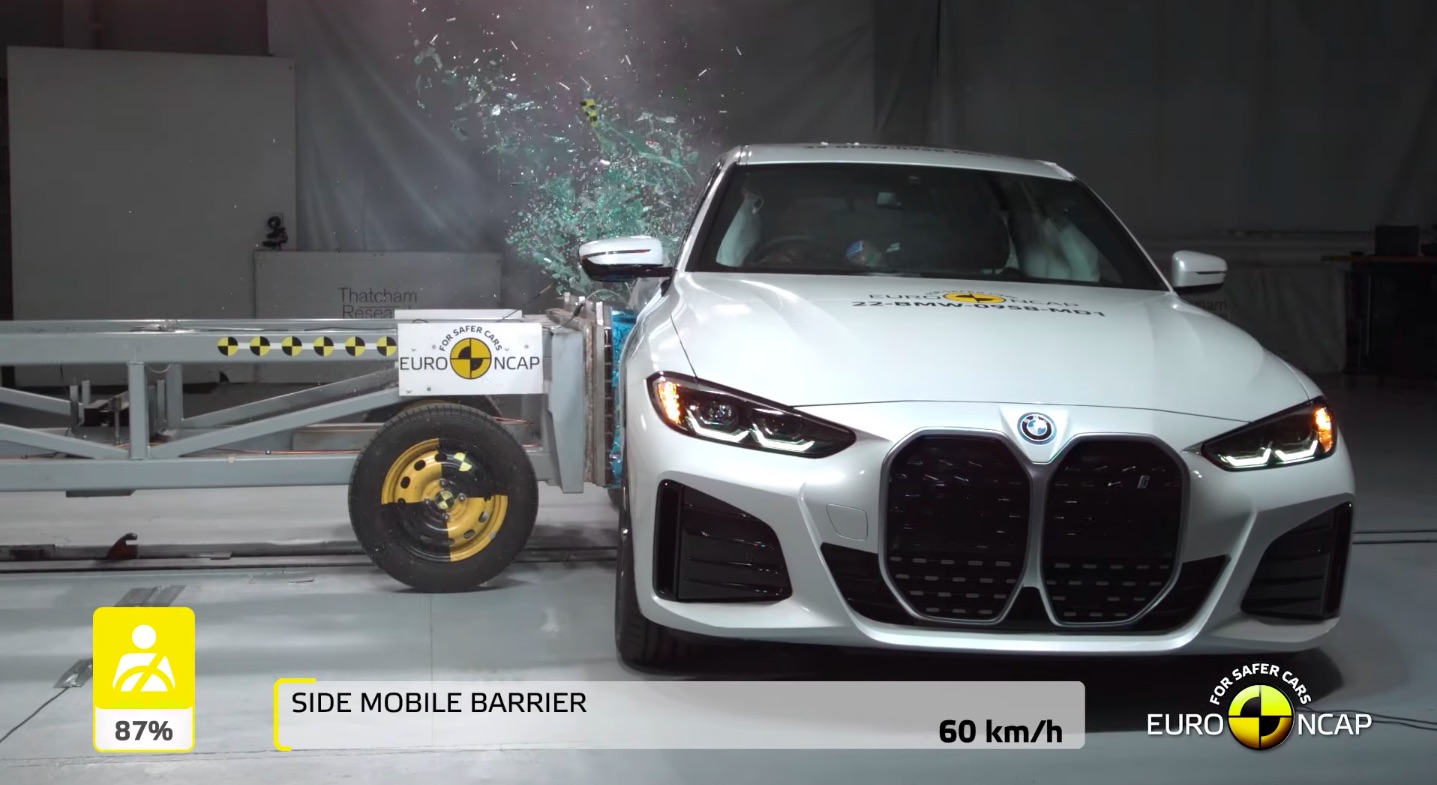 BMW i4 earns surprising safety rating from the Euro NCAP

The all-electric BMW i4 sedan scored 4 stars out of 5 during its safety tests with the Euro NCAP, a surprising score for an all-electric vehicle.

The European NCAP agency crash tests vehicles in four categories; Adult Occupant, Child Occupant, Vulnerable Road User (Pedestrian/Cyclist), and Safety Assist. The BMW scored 87%, 87%, 71%, and 64% accordingly. In comparison, the most recent Tesla sedan tested by the agency was a Model 3 from 2019, which scored 96%, 86%, 74%, and 94%, respectively. The Model 3 was awarded a 5-Star Safety Rating by the Euro NCAP.

It is important to note that while it may be easy to pile on BMW, a 4/5 rating is still a good score. It is a score that still indicates that the i4 is a very safe car. And looking at the comments from the Euro NCAP, BMW earned praise for many of its innovative safety systems in the i4.

Electric cars already hold an advantage over many other vehicles on the road in terms of safety. They tend to have a low center of gravity due to their batteries being placed low to the ground (preventing easy rollovers). The batteries also often serve as an added structural system that provides extra reinforcement in case of a crash. EVs, much like the BMW i4, often have access to the newest forms of safety features as well.

In terms of child occupants, the i4 lost points because many areas of the vehicle were not designed for child occupants. Outside of the two back seat areas, there were no mounting points for car seats and the seatbelts were placed too high for small children to be safely secured. However, for children placed in the back, either in car seats or out, they were unharmed in the testing done.

The BMW lost more points in vulnerable road users and safety assists. For vulnerable road users, BMW equipped the i4 with its “active bonnet” system, which lifts the car when a pedestrian collision is detected. The car even uses an auto brake assist system that will engage if the vehicle senses it is about to hit a pedestrian or cyclist. However, for those who are hit by the vehicle, the Euro NCAP noted that “protection of the pelvis was largely poor.”

Furthermore, the i4 lost points for receiving a marginal grade in the emergency lane keeping test, as well as in the auto emergency brake assist test against other vehicles.

The BMW i4’s test and others can be found on the Euro NCAP website.

Overall, the fact that the BMW i4 scored relatively lower than other EVs is still quite an achievement, as it is still far safer than many combustion-powered rivals. Yet another reason for people to be excited about electric vehicles in the future.

Watch the BMW i4’s safety tests with the Euro NCAP in the video below.

BMW i4 earns surprising safety rating from the Euro NCAP