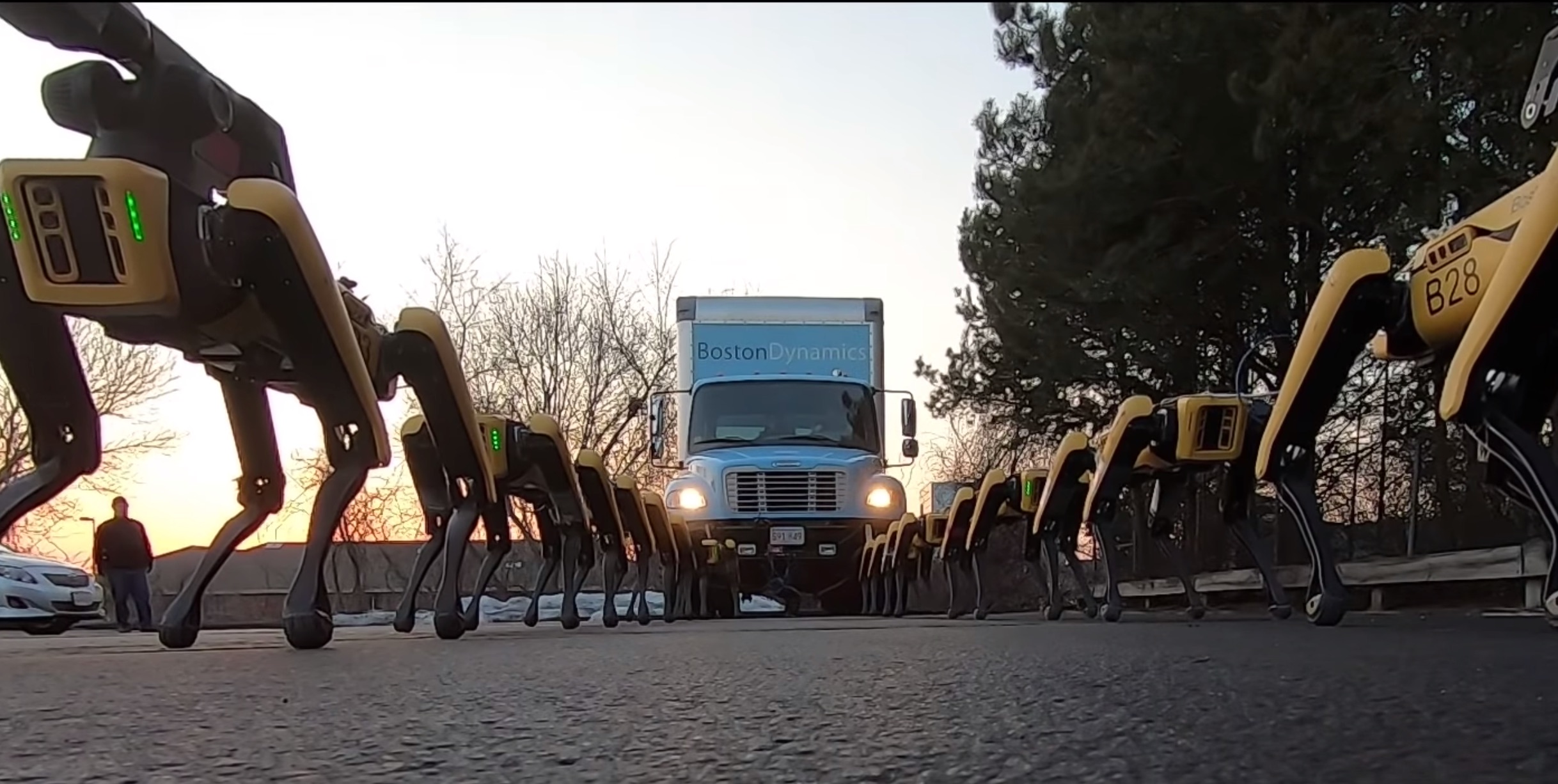 Boston Dynamics has a motto on the front page of its website: “Changing your idea of what robots can do.” To date, that’s probably pretty accurate, depending on which movies you’re referencing. The company has previously released videos of its SpotMini canine-type robot opening doors, navigating stairs, and cleaning up a kitchen, all solo. Now, Boston Dynamics has demonstrated what the ‘Spotpower’ version of the bot can do when it comes together as a pack: march in synchronicity and tow a truck.

In a video published on the Boston Dynamics’ YouTube channel titled “Mush, Spot, Mush!”, ten bots are seen pulling a cargo truck in neutral up a 1% incline. The company website lists two similar versions of the Spot robot, the Spot classic, and the SpotMini, but not the variation that’s marching. The Spotpower version in the video may be a hybrid of the two, but not much information is offered; it certainly looks a lot like the SpotMini without the helper arm. Perhaps one is only needed if tire changing is in order.

Boston Dynamics information page further states that the SpotMini is the quietest robot they’ve built, but the eerie mechanical marching sound made while the Spotpowers are in motion is still loud enough to draw significant attention (or fear). Interestingly enough, the video description also notifies viewers that the Spot robots are under production and will be available soon. Could this be an indicator that we should be on the lookout for Spot ‘user experience’ videos to come?

Both the SpotMini and the Spot classic robots are all-electric, operable for 45 and 90 minutes per charge, and weigh about 30 kg (66 lbs) and 75 kg (165 lbs), respectively. The Spot classic is listed as having a 45 kg (99 lbs) cargo capacity, and the Spot Mini is listed at 14 kg (30 lbs) payload capacity. However, after this promotional piece, it seems that the stats need to be updated to include towing capacity.

The YouTube channel for Boston Dynamics is full of entertaining videos of Spot, SpotMini, and its humanoid brethren demonstrating a dynamic range of task capability for the company’s creations. Spotpower coming to production means that sort of robotic flexibility will be ready to help with a variety of applications soon. Given what already been shown, package deliveries, warehouse operations, and possible search and rescue missions may be what’s in store for customer use.

Watch the marching Spotpower robots in action below: