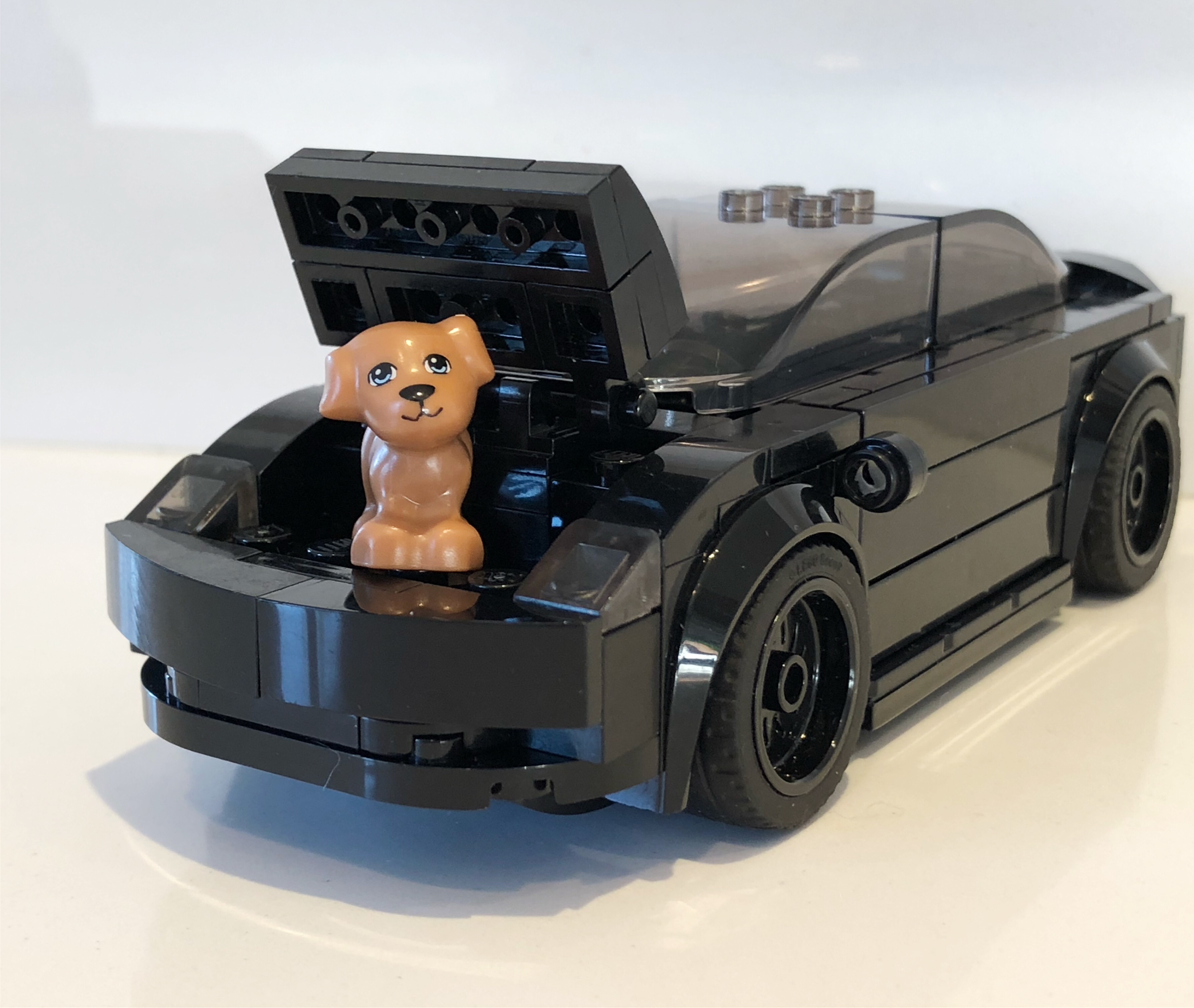 A Tesla Model 3 owner and enthusiast has taken up the cause of bringing the all-electric car maker’s latest vehicle to the LEGO Speed Champions playset series, specifically to represent a “nod to the world’s transition to sustainable energy and green energy innovation”. With enough community support, a brick version of the popular Model 3 could be available to purchase from stores in the future.

In a submission to the toy company’s LEGO Ideas fan community site, Reddit user pfunkadunk designed a very detailed black version of the midsize sedan, including the glass (clear) roof and touchscreen panels with swappable screens to represent features like Romance Mode and the now-removed TeslAtari game Pole Position. Updates to the LEGO Model 3 have been ongoing since its creation a few months ago, and the most recent version pays tribute to some popular Tesla exclusives: Sentry Mode and #frunkpuppy.

Great care was taken to present the LEGO Model 3 in a fashion as similar to a real gallery-floor-worthy Tesla as possible. Several close up shots were taken of the front, back, sides, and undercarriage of the toy car, and some “action” shots of a LEGO character using a brick-built Tesla Supercharger with the Model 3’s charging port were included. In one setup, a LEGO couple is even seen enjoying Romance Mode, the Tesla Easter Egg featuring a fireplace video with a corresponding music selection. 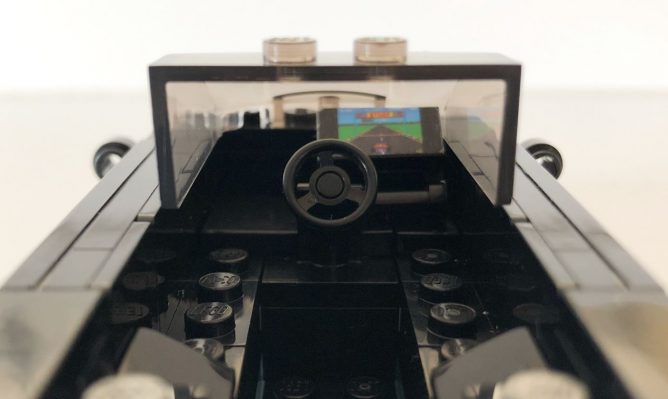 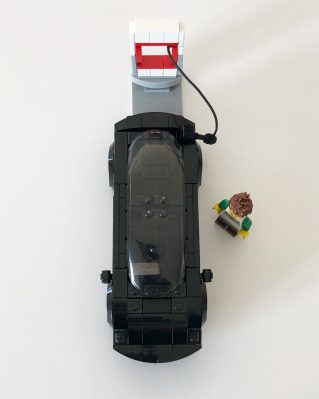 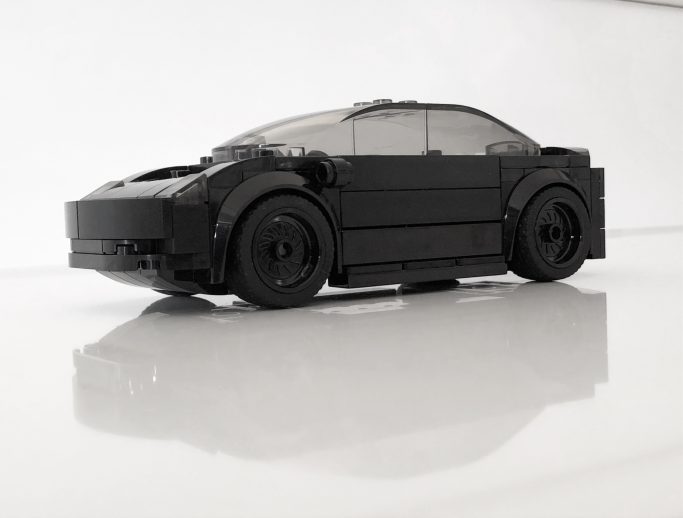 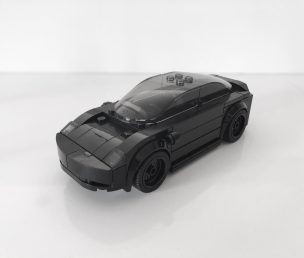 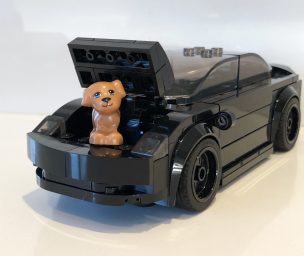 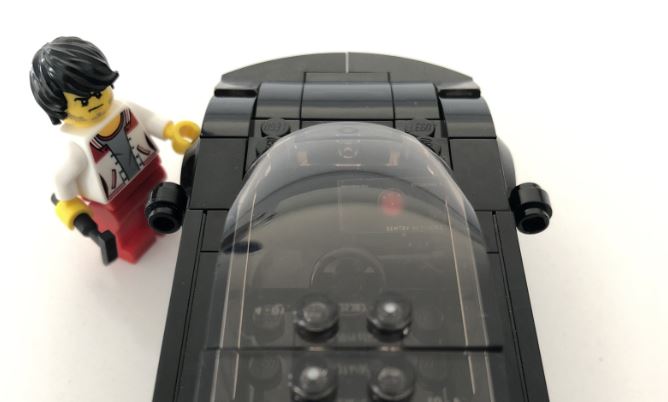 Along with detailed photos and video, the Model 3 set includes its own Supercharger, although we’re not sure whether it’s Version 3, boasting a 250 kW power output for charging at speeds of up to 1000 miles per hour. The hinged and operable frunk can also accommodate a LEGO canine, meaning the #frunkpuppy trend can now include residents from the brick-ish side of life. Perhaps future updates will include Tesla’s flush door handles, Power Sports Aero Wheels, and some enhancing decals.

LEGO’s Speed Champions series currently features classic and modern muscle cars, but only the Audi R18 E-Tron Quattro, a diesel-electric hybrid, and Porsche’s 919 Hybrid represent the lower emissions category of vehicles – for now. The Model 3 LEGO designer has set out to change that lineup to include an all-electric option, and given the performance stats and Track Mode features offered by the Tesla vehicle, its inclusion in the Speed Champions series is perhaps warranted. A website was put together to highlight the LEGO design project and further make the case for being part of the series.

The Model 3 LEGO design does contain some significant overall design differences from the actual car such as the steering wheel being centered. When compared to other cars in the Speed Champions series, though, it’s clear that the designer made the brick Model 3 in keeping with the design feel of the series overall. In comparison, the diecast collector cars offered in Tesla’s online shop are meticulously designed to replicate each one of its vehicles, but at $250 they may be cost prohibitive for a kid-oriented target audience. LEGO Speed Champions sets go for between $25 and $75 depending on the item.

If a LEGO designer obtains 10,000 supporters for their submission, the company will make it into an official toy for sale after a review.