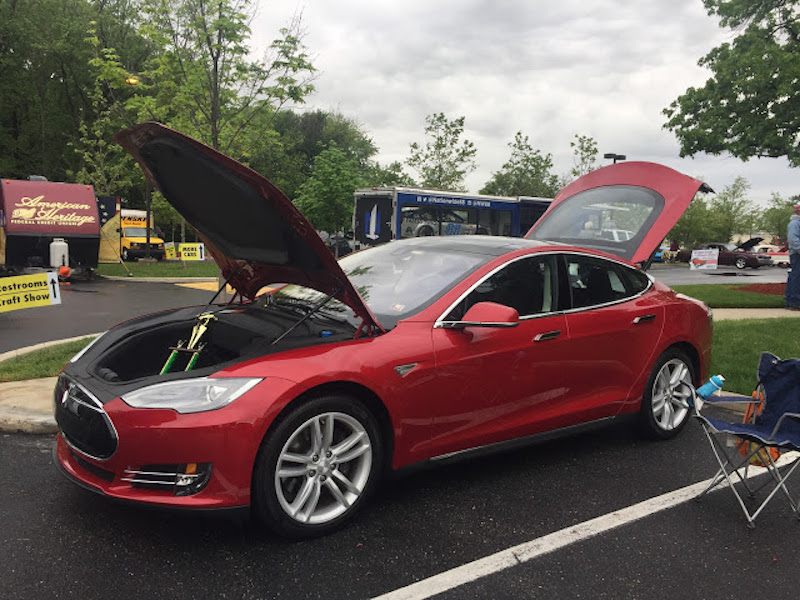 Northeast Philadelphia is perhaps the most perfect example of a classic, blue-collar town in America. With a population of 300,000 in this section of the city alone, it certainly has enough size to qualify as its own town. Filled with trademark row homes, it is densely populated and tight-knit, with many families choosing to settle mere blocks from where one or both adults grew up.

If Americans of all ages and backgrounds can agree on one thing, it’s that we love our cars! Specifically, we love American Muscle. There were no fewer than two dozen mustangs at this year’s Car Show, sponsored by a local oldies radio station (WOGL) and the credit union whose property it was held on. In fact, the gentleman who was parked beside me had one of the most beautiful mustangs I’ve ever seen. So it’s almost sad that he spent the entire day watching lines of people waiting to talk to me about my Tesla.

“Make no mistake about it, the shift has happened.” In May of 2015, I decided to participate in this Car Show. It was the first time I had ever done so, but with our Model S all shined up and ready to be shown, I went home with a beautiful trophy. I spent all day fielding questions and several times being told that “I need gas” or “I’d miss the sound” or “it’s just not the same.” This from traditional gear heads, so I was always gracious. Overall people were positive and pleasant – plus very curious – but most hadn’t ever heard of Tesla.

368 days later? I estimate that more than 75% of the people I spoke with had heard of the car. A solid 50% knew exactly what it was and knew at least one thing about it. Unlike the few that thought they knew something about it last year, almost every fact I overheard someone claiming was true. “This car technically scored over 5 stars in safety,” “They’re making one that starts at $35,000 soon,” and “It’s both designed and built right here in America!” were some of things I was happy to hear.

As of today, it is still true that Tesla has not spent any money on placement or advertising in traditional mediums. There are no billboards, no glossy magazine spreads and certainly no commercials during the Super Bowl. Tesla has relied on word of mouth, social media and a really nice boost from the local news (overheard today: “I saw it on Channel 6, people were lining up!”) to get more and more Americans familiar with this idea of an electric car.

For this reason, I urge every owner, if you have the chance, to bring your Tesla to a local car show.

This year, I opened not to technically register my car for judgement. I was there just for the simple joy of getting to talk about it all day, as well as doing my duty to spread the word about the car.

Here are some of my favorite memories:

I am so thrilled, if a little exhausted, at how differently the conversations today were framed compared to this time last year. Sure I had to tell people the same things we’re all used to repeating – around 250 miles; well it depends on the source of electricity but 1-2 hours per night; they invented these super fast chargers along major routes that are free – but this time they had heard of the car and wanted to know more.

Ford, Chevy and GM, be afraid. Be very afraid. Your key demographic has now heard of this not-so-little start up in California.