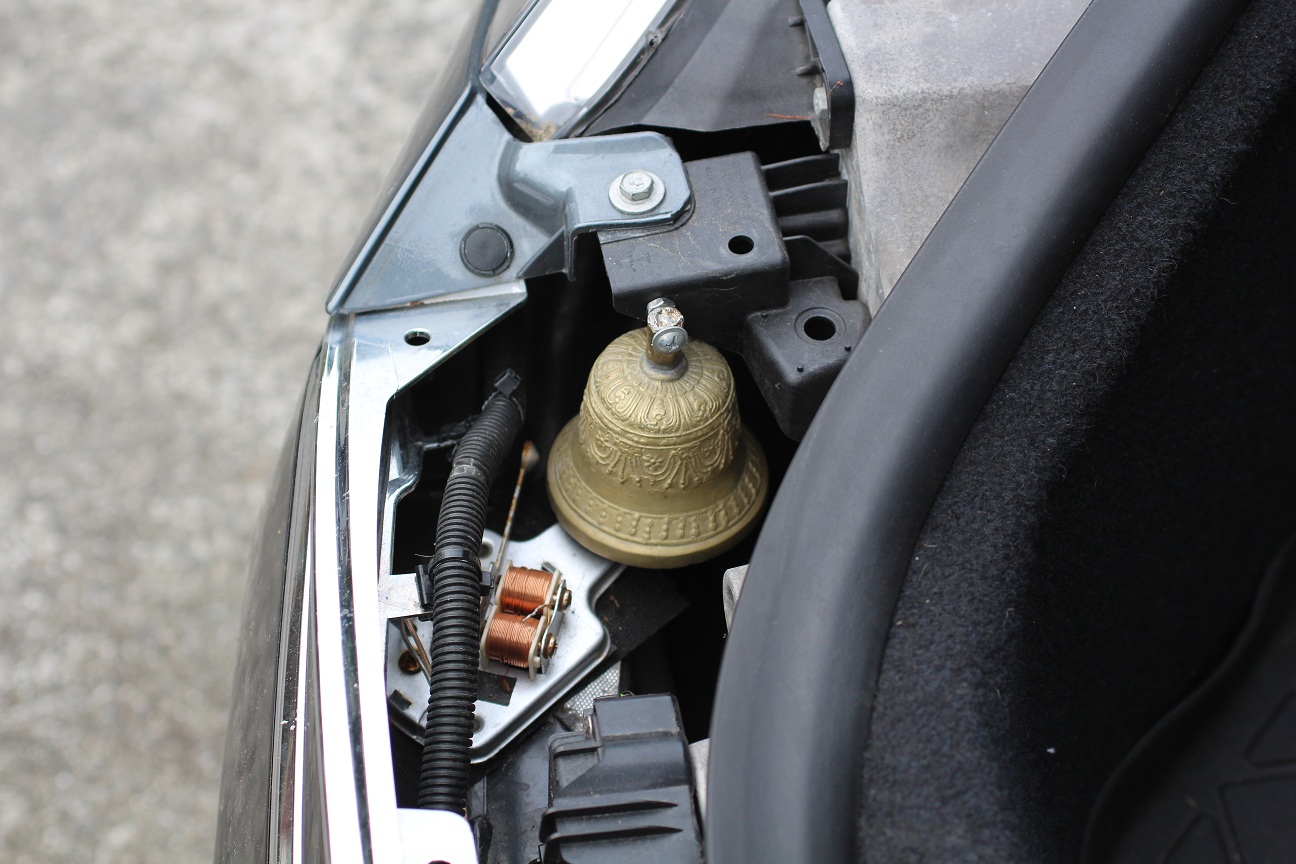 Do you ever find yourself just barely creeping through a parking lot like a stalker following prey? A quick tap of the standard Model S horn might startle your ‘game’ enough to invoke fear and anger, turning them into the predator! I have found a solution for this ‘too lazy to look’ crowd of humans that have foregone their innate senses of the real animals in our world.

This custom pedestrian warning bell is powered by a classic 9V battery so no worries of any ‘12v failure‘. Even in the worst case scenario with completely dead HV traction and 12V batteries you will still be able to sublimely warn animals of your silently approaching 2 1/2 ton roller coaster. The idea is simple. Button in the car and an external noise maker for the people outside. I began deliberating over my design options; wired or wireless, hardwired or using a small battery, electronic/recordable sound or a real bell? Maybe I could use a classic Bermuda Carriage Bell mounted in the floor as they were meant to be used – A foot activated ‘ding-dong’ could be kind of cool, maybe?

Not too much time passed before my wife showed up with an assortment of antique brass bells from local pawn shops. With the noise maker part picked out, I still needed to come up with a way to ring it. My first thought was to just make a solenoid coil with an iron rod for the hammer. I briefly tinkered with some coated copper wire and put together an electromagnet using a bobbin spool but never found a proper piece of metal from my miscellaneous parts to make a good hammer. So off I go to the hardware store to see what cheap and easy hammer mechanism I could use. I really just wanted to get this all together quickly and planned on a custom rebuild of it later. With this in mind, I opted to use the cheapest doorbell buzzer that the hardware store offered. Removing the stock buzzer bell and tweaking out the hammer a little allowed for a single pulse hammer versus a continuously switching hammer (like a buzzer).

For the first iteration I settled on a simple hardwired setup. The trigger is a momentary push button wired to the right front corner of my drivers seat. I mounted a standard 9 volt battery under the seat and ran small gauge speaker wire to the front of the car under the nose cone where I mounted my bell and ‘hammer’. The hammer mechanism is held down with a bit of 3M dual-lock velcro (which has stayed in place for over 2 years) The bell appeared to be missing a handle so there weren’t any modifications needed for it to fit where I mounted it. I removed the chunk of metal hanging from a wire on the inside and drilled a small hole to mount the bell with a machine screw.

Well…I guess it depends on who you ask! This dog at autocross thought it was time for some food! Maybe not the best creature to be ringing bells at? I have received all sorts of responses from the bell and many smiles. I ring it when I pass bicyclists and when people walk out in front of me in parking lots without looking. I think many of the looks I get are that of confusion. And then there are some people that just don’t care to look at anything but the store they are focused on while walking through parking lots and have a bit too much trust in their surroundings (maybe I should just use my horn for them). Several folks have recently assumed that the bell was a standard feature of the car…maybe it should be?