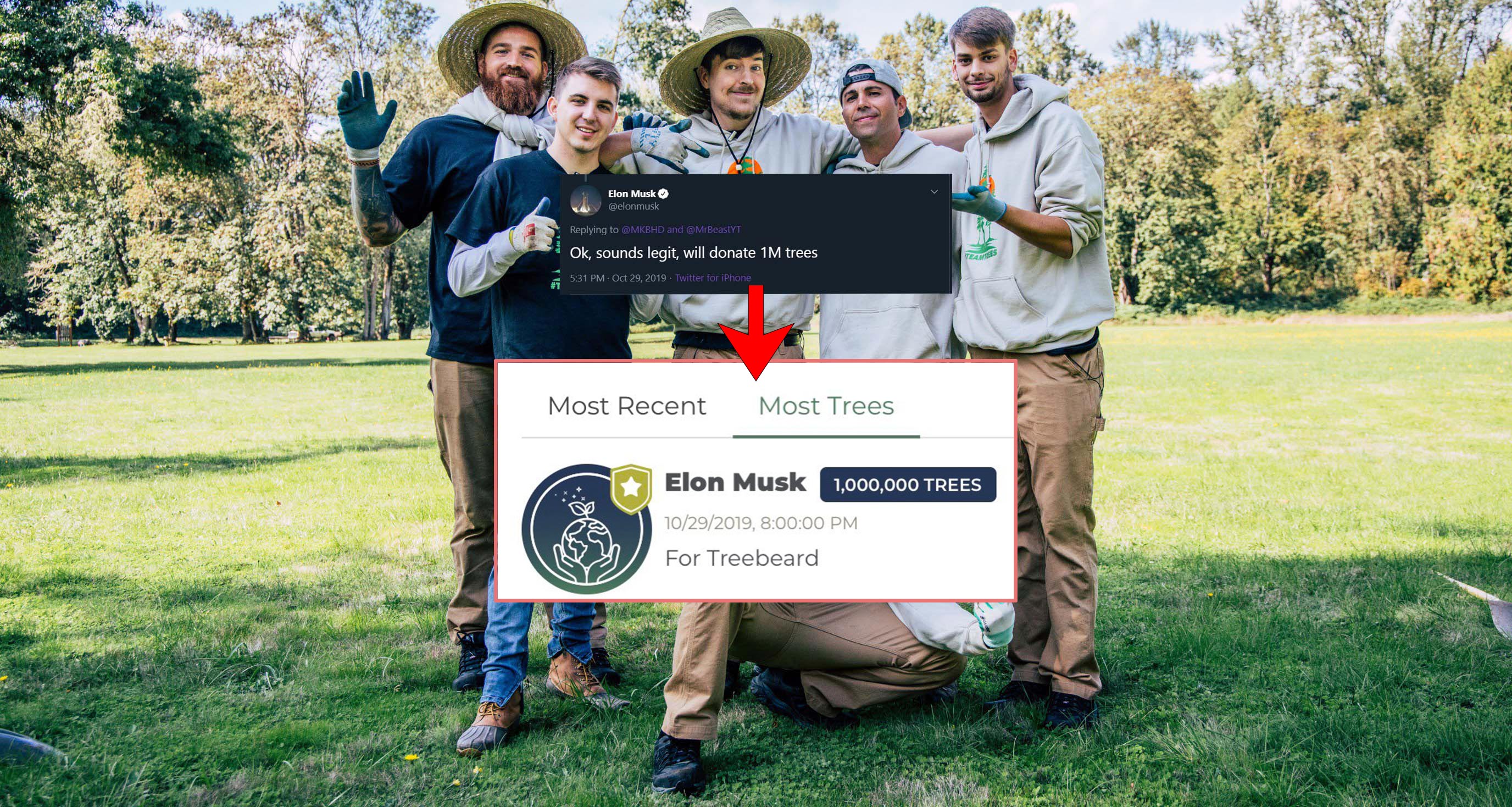 The TeamTrees.org organizers promoting an initiative to raise $20 million to help The Arbor Day Foundation plant 20 million trees gain support of Elon Musk in the form of a $1 million donation. (Youtube/Teslarati)

In May of 2019, popular YouTube creator “MrBeast” – real name: Jimmy Donaldson – reached 20 million subscribers. His followers quickly challenged him to plant as many trees as he had followers. In response, the YouTuber did what YouTubers do best: formed a collaborative effort of other well known YouTubers and legitimate foundations to crowdfund a viral challenge. The viral challenge has been so successful in just four days that it now has the backing of Tesla and SpaceX CEO Elon Musk.

Sounds cool. Where are the trees being planted & what kind of trees?

With the help of multiple partners, Donaldson paired up with The Arbor Day Foundation to create a fundraising campaign that would plant 20 million trees. TeamTrees.org was created and went live on Oct. 25th following an announcement video posted to the MrBeast Youtube channel. As stated on the site’s FAQ page, the organizers have promised all donors that “for every dollar you donate, one tree will be planted in a forest of high need around the world.”

In just four days the TeamTrees.org official Twitter account has garnered nearly 12 thousand followers when the challenge first caught the eye of Musk. Donaldson posted an update that “almost 6 million” trees had been planted accompanied by a screencap of what just 5,000 trees appeared as in the popular online game “Fortnite.” Musk responded “sounds cool,” but wanted more information and asked, “where are the trees being planted & what kind of trees?”

Of course, it comes as no surprise that the prospect of planting 20 million trees piqued the interest of the billionaire that founded Tesla. Musk has long been a supporter of the premise that electric vehicles could help reduce emissions and preserve the earth of the future. Combining an initiative to save Mother Earth by planting trees and using Fortnite as a visual reference was as genius as it could get to guarantee to grab the billionaire’s attention.

The factor that really drove it home was an almost immediate response by the influential tech review Youtuber, Marques Brownlee. Brownlee, who has had the opportunity to interview Musk at a Tesla factory, responded by linking the billionaire directly to the TeamTrees.org website. Musk then, almost as immediately, pledged to “donate 1M trees,” in other words, donate $1 million to the cause.

Musk’s promised donation quickly gained appreciation all over the internet. The official Youtube Twitter account soon confirmed the legitimacy of Musk’s pledge. Then, larger than life social media platform – owned by parent company Google – promised to match every one of the following million donations to keep the support of TeamTrees.org going.

While pledging to plant 20 million trees is surely an effort in the right direction of combating global climate change, it may be just a drop in a bucket. As suggested in a fortuitous and completely unrelated article, WIRED.com suggests that more than just planting trees would need to be done in order to really address the issue of excess carbon in the atmosphere. An overarching theme of the article is that “seedlings and fancy agriculture” won’t even make a dent in the issue if emissions aren’t reduced.

“It’s possible to imagine agriculture as a kind of geoengineering, of improving on nature’s yields and productivity. If it could also improve on nature’s ability to put carbon in the ground, that would be transformative. But there’s no evidence yet people can do it at a scale that it can by itself save the planet.” – WIRED.com

Perhaps it won’t completely save the planet from the destruction that has already been done but surely vowing to plant sustainable trees in forests of high need is a step in the right direction. Especially when the cause has gained the attention of thousands of internet users and some very influential creators including MythBusters’ Adam Savage and SmarterEveryday’s Destin Sandlin.

If you would like more information about the campaign backed by Elon Musk, you can view the announcement video below or visit TeamTrees.org to pledge your own donation.