Elon Musk and SpaceX are aiming to provide a second update on the company’s Mars architecture plans in late September of this year, likely at the 2017 International Astronautical Congress (IAC) in Adelaide, Australia.

While 2017 has been extraordinarily busy and successful for SpaceX thus far, it has also been a somewhat quiet year for Mars and the technology being developed to colonize it affordably. There was a brief flurry of social media information focused on the testing of the ITS carbon composite test tank revealed at the 2016 IAC, with a few pictures and a video of its transport. This activity, as well as Elon Musk’s Ask Me Anything on /r/SpaceX, occurred a month or two after the 2016 IAC, in October and November.

Moving the prototype Mars tank in preparation for testing out at sea.

The only concrete information revealed about SpaceX’s Mars ambitions in 2017 have so far been distributed by Musk over Twitter and in an interview of SpaceX President and COO Gwynne Shotwell a few weeks ago. Musk offered tentative time frames for a possible update of the Mars architecture, stating that he believed it dealt with the far more crucial challenge of how to finance such a large endeavor’s significant R&D costs.

Maybe the upcoming IAC in Adelaide

During his 2016 reveal, Musk estimated that something like $10 billion would be required to complete development and initial construction of the Raptor engine and ITS test articles. While it is believed that SpaceX has at least several hundred million dollars of liquid capital available, growing several billion dollars of capital is a much greater challenge that will likely require a different methodology than those typically employed by Musk.

Shotewell also discussed SpaceX’s Mars ambitions off and on during an hour-long interview on The Space Show. Of general interest, she mentioned that the current team working on Mars-related research and development was “tiny”, but that it would become a drastically more resource-intensive priority as the company completes work on the fifth and somewhat final “Block” of Falcon 9 and finishes the work necessary to begin routinely conducting Commercial Crew missions. Shotwell gave a timeline of “soon” for the beginning of Block 4 flights and “end of year” for the introduction of Block 5, which is intended to significantly increase the reusability of Falcon 9 (titanium grid fins are a feature of this strategy). Barring delays or setbacks for SpaceX, this implies that SpaceX will begin aggressively pursuing the concrete development of their Mars architecture as soon as the latter months of 2018 or sometime in 2019.

More specifically, however, Shotwell said that the Raptor test article revealed at the Guadalajara IAC has since conducted “dozens” of tests and is now more seriously considering the engine’s potential utility aboard Falcon 9. The current subscale Raptor components are approximately half the size of the final, operational design, and the need to scale up by as little as a factor of 2 should make the realization of the final design considerably less difficult, and make the testing of the current Raptor far more demonstrative of the operational engine. The exploration of vacuum Raptor as the engine of an upgraded second stage for Falcon 9 would further allow for true on-orbit testing of Raptor, and increasing the performance of S2 would allow for greater flexibility in exploring second stage reuse. Musk and Shotwell have expressed interest in this, particularly given that the second stage is approximately 30% of the cost of every Falcon 9, thus capping any potential cost savings first stage (and fairing) reuse may bring. If SpaceX wishes to lower the cost of launches by a factor of 10 to 100 and bring to life any form of the Mars architecture revealed in Guadalajara, they will have to develop second stage reusability that it is both as rapid, functional, and complete as they soon hope to make first stage reuse.

A fully reusable Falcon 9 would offer the company more cost-effective ways to launch their own profit-driving internet constellation, and could also simply provide deeper profit margins for their main business of commercial launches. However, with Musk having already publicly acknowledged that reusability cost SpaceX approximately $1 billion to develop, SpaceX is certainly already considering the plausibly diminishing returns of diverting more funds and human resources into the continued development of Falcon 9. The most likely outcome is almost certainly some combination of the above goals, whereby SpaceX would delay their Mars exploration timeline by several years and concurrently pursue Falcon 9 second stage reuse and the initial test article development for their Mars architecture, as well as exploring the challenges and intricacies of human spaceflight and deep space exploration with Dragon v2. 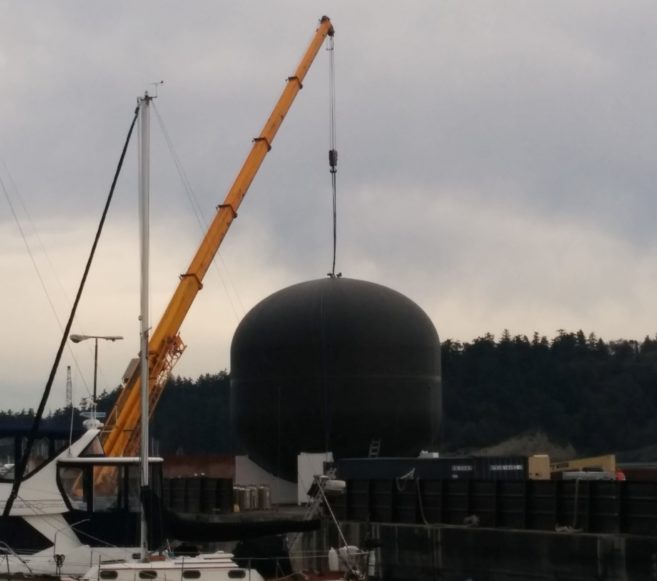 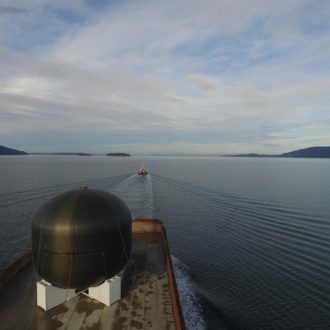 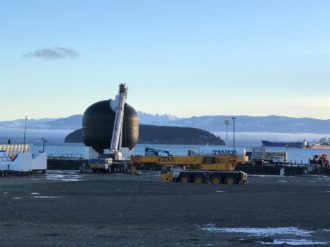 The test article before testing in early February 2017, during which it is believed to have lost structural integrity and failed. (Reddit /u/TeddyBear3238) 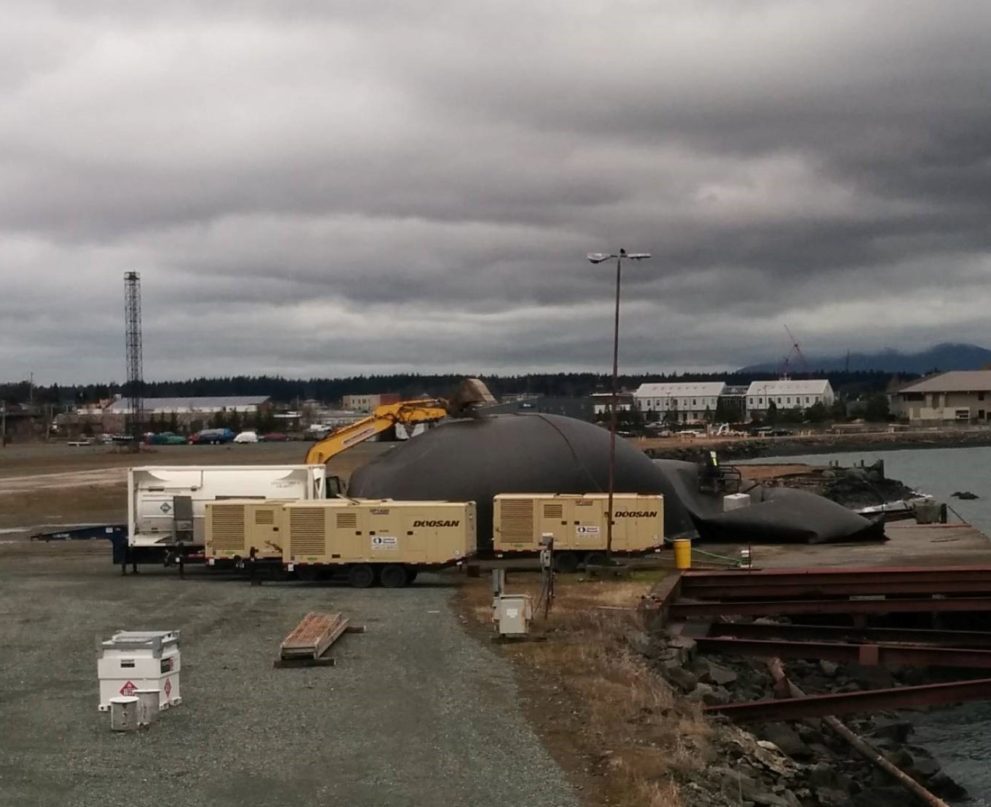 The remains of the test article tank after suspected over-pressure testing. Divers were required to salvage the remains over the course of several days. (Reddit /u/ Death_Cog_Machine)

Of note, the only known major testing event in 2017 related to SpaceX’s Mars program was observed by a SpaceX fan in February of this year. After successful November 2016 tests of the carbon composite tank in northern Washington state, fans noted that the tank had made an outdoors appearance once more in early February 2017. SpaceX mentioned on Instagram that the following test, the one SpaceX was preparing for in February, was a full cryo test of the tank, meaning that it involved actual high-pressure, supercooled liquid oxygen. Another fan noted several days later that the barge SpaceX was testing the tank aboard returned to port empty, and later observed what looked like several large pieces of the tank test article that reportedly had to be recovered from the sound by divers. The logical conclusion is that the tank was destroyed during its second phase of testing, but the crucial and currently unknown fact of the matter is whether the failure was a result of intentionally destructive testing or defects in what was effectively an experimental engineering article. Further SpaceX talks later this year will likely reveal some level of detail as to what transpired in the testing of that prototype carbon composite tank.

Reasoned speculation aside, the latter months of 2017 have multiple talks, speeches, and hearings planned by SpaceX members like Elon Musk and Tim Hughes, and information on SpaceX’s Mars ambitions and other future prospects will almost certainly be offered. Hughes is to attend a hearing at 9am EST on July 13th for the U.S. Senate on commercial space and will be testifying on the subject as a representative and employee of SpaceX. Just under a week later, Elon Musk is scheduled to be the main keynote speaker at the 2017 ISS R&D Conference. His talk is set to begin at 12:30pm EST on July 19th. A handful of months after that, as mentioned above, Musk may also provide a detailed update on SpaceX’s Mars architecture at the 2017 International Astronautical Congress.

In other words, on top of an aggressive 12 possible launches between August and the end of December, SpaceX fans also can look forward to details, photos, and possibly even more about the company’s Mars efforts over the next several months.