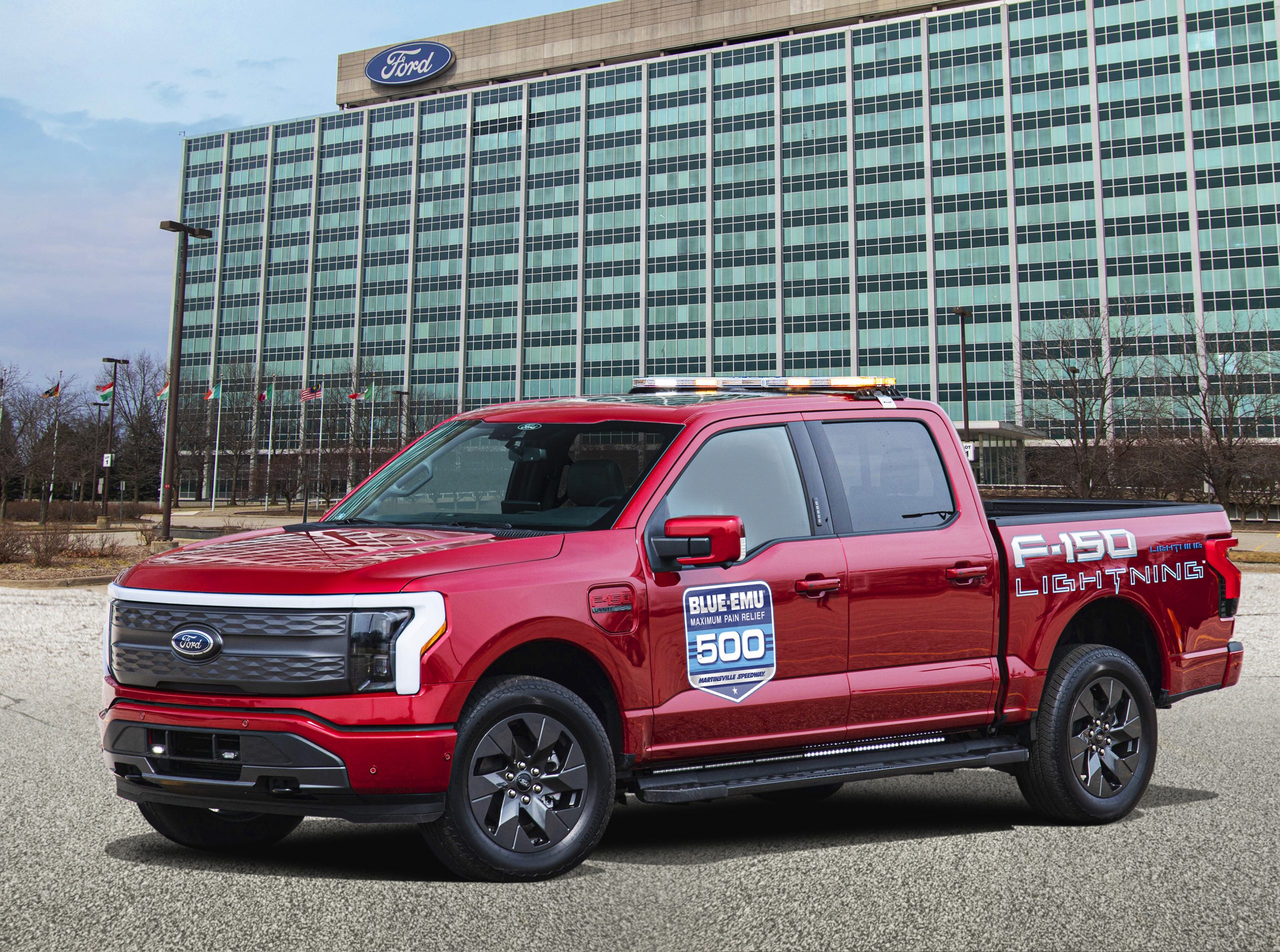 A fully-electric truck that is helping change the future of Ford Motor Company will be on track at Martinsville Speedway as the 2022 F-150 Lightning makes its debut as a pace vehicle for the NASCAR Cup Series on April 9.

The Ford F-150 Lightning has been chosen as the official Pace Car for this weekend’s NASCAR Cup Series race at Martinsville Speedway in Virginia. Ford’s introductory electric pickup will be the first electric truck to lead the pack of cars to the green flag Saturday night but will be featured at the half-mile track all weekend.

The Pace Car does a few things in a NASCAR race. It leads the cars to the first lap, but it is also required to lead the vehicles around the track under caution laps, ensuring safety and proper speed during the delay in racing.

While NASCAR still utilizes high-horsepower gas engines for their competition vehicles, one thing all stock car fans love is speed. Thanks to the electric powertrain featured in the F-150 Lightning, the pickup will undoubtedly turn the heads of racing enthusiasts with its instant torque. Regardless, the Ford-loyal race fans who have followed what was once the nation’s fastest-growing sport will undoubtedly take a peek at the automaker’s newest and latest technology, which packs efficiency, utility, and sustainability in a single pickup.

“We can’t wait to show our Ford fans how capable the F-150 Lightning is,” Darren Palmer, VP of Ford’s electric vehicle programs, said. “With 563 horsepower, 775 lb.-ft. of near-instantaneous torque and a 0-60 mph time in the mid-4-second range, I think it will turn some heads out on the track.”

“Ford is fully invested in electrification, and the response to Lightning has been so overwhelming that it was an easy decision to bring it to a NASCAR event,” Jeannee Kirkaldy, Ford Performance’s Motorsports Marketing Manager, said. “One thing we definitely know is that our fans love trucks, and we’re confident that feeling will only grow when they see Lightning out on the track leading the field to green.”

Ford’s Mustang Mach-E was the Pace Car for the spring race at Talladega Superspeedway in Alabama, where the only thing that keeps the cars from reaching speeds of 250+ MPH is a restrictor plate. The Mustang Mach-E made Ford the first OEM to use an electric vehicle as a Pace Car for a NASCAR race.

Driver Ryan Blaney, who is looking for his first career series win at Martinsville, said the Mustang Mach-E offered a fun experience, which has him looking forward to Ford’s first-ever all-electric pickup. “I haven’t driven the Lightning yet, but if it’s anything like the Mustang Mach-E, it’s going to be a blast,” Blaney said. “I hope it ends up being the only thing in front of me once the race starts.”

Blaney drives the no. 12 Ford Mustang for Penske Racing. Blaney overtook Ross Chastain for the number one spot in NASCAR’s power rankings, so expect to see him near the front of the pack on Saturday night.

The F-150 Lightning has already accumulated nearly 200,000 reservations since being unveiled in May 2021 and is the third all-electric vehicle in Ford’s lineup, joining the Mustang Mach-E and the E-Transit.

The race, which is the Blue-Emu Maximum Pain Relief 500, will start at 7:30 PM eastern on Saturday night.