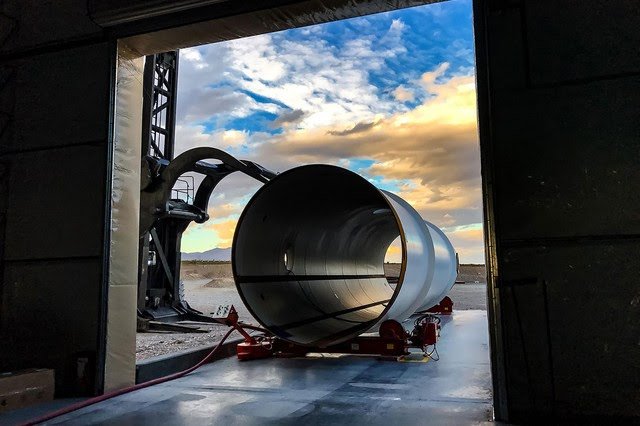 Speaking to the press at CES 2017, Hyperloop One executives laid out their vision for a new global distribution system that will revolutionize the way goods are delivered to markets worldwide. “Just think of Hyperloop as broadband for transportation,” Rob Lloyd, CEO for Hyperloop One, tells Inverse. “If you think of it as broadband for transportation you suddenly unlock a massive amount of change, and new applications. New thinking,” he added emphatically.

That “broadband of transportation” took a step toward reality on January 6 when Hyperloop One announced 35 semi-finalists in its Hyperloop One Global Challenge. Announced last May, the Challenge attracted entries from 2,600 teams of engineers and urban planners eager to convince the company that their’s was the perfect location for a Hyperloop demonstration project. One group proposed linking Dubai with Abu Dhabi. Another envisioned a Hyperloop link from Russia to China.

The 35 semi-finalists will present there ideas at three locations later this year — February 28 in New Delhi, April 6 in Washington, D.C., and April 27 in London. Hyperloop One will whittle the list of finalists down to about 6 finalists after those presentations are completed.

Government leaders, including transportation officials from the incoming Trump administration, will be invited to regional presentations. “Our instincts are that the work that we’re doing is going to be extremely well received when the people get into place,” Rob Lloyd says. “I think we’re going to be a very, very important part of the next three or four years in terms of the potential infrastructure that U.S. looks at.”

Feasibility studies will follow, but they are just a one step in the process. “We’re not in the business of doing studies, we’re in the business of looking for hyperloops that can be built,” Rob Lloyd says. “We want to have three routes in production in the next five years.”

Nick Earle, who oversees global field operations for Hyperloop One, tells Inverse, “This is not just about moving things and people quicker. This is [about] the business models that are disrupted — and enabled — by Hyperloop transportation.”

There is another tie-in between Elon Musk — who originally conceived of the Hyperloop idea — and Hyperloop One’s vision. The company foresees autonomous cars — one of Musk’s highest priorities — as being able to travel inside the Hyperloop. “Autonomous cars will actually be able to go inside the Hyperloop. You actually can do door-to-door like never before,”  says Nick Earle. That idea came out of a partnership between the company and Dubai’s Road and Transport Authority.

A full scale test of the Hyperloop One prototype system is planned for April of this year. “It’s one thing for us to talk about building it, it’s something different for you to actually go build it,” Josh Giegel, President of Engineering for Hyperloop One, says. The demonstration will be fully open to the public.

“For us, taking this concept and actually building it, and testing it, and showing people — allowing them to see it, to touch it, to smell it if they want — is really, really important,” Giegel explains. “We’ve felt that way for a long time, that it’s one thing for us to talk about building it It’s something different for you to actually go build it.”

Hyperloop One acknowledges a debt to Elon Musk, the serial tech visionary who first envisioned the Hyperloop concept and made his thoughts public in a published white paper in 2013. “I think he’ll always have a big part of it.,” says Giegel. “We’ll forever be indebted to him for giving us kind of the idea, but we definitely changed the technology quite a bit from the original white paper.”

“It’s more than just a train, or a pod in a tube. We’re taking it to a level of connectivity and really being the high speed backbone of the future transportation network.”