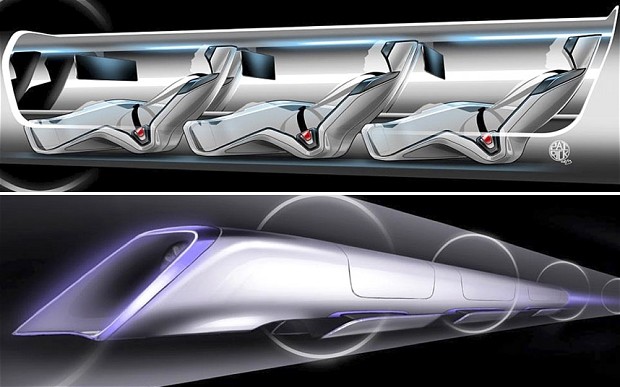 HyperLoop Transportation Technologies has purchased land in central California to build HyperLoop test track to see if the this nutty idea actually works.

HyperLoop Transportation Technologies has struck a deal to buy enough land near Interstate 5 in central California to build a 5 mile long HyperLoop test track, reports Navigant Research. It will cost about $100,000,000 and serve as a “proof of concept” facility for the HyperLoop idea proposed by Elon Musk in 2013. The money to pay for it is expected to come from an IPO later this year, with construction beginning in 2016.

If you’re not familiar with the HyperLoop, think of it as one of those pneumatic tubes that connect drivers and tellers at drive-thru banks, only hundreds of miles long and big enough to carry people. Musk thinks such a system could whisk passengers from LA to San Francisco in about 35 minutes at speeds up to 800 mph.

If that seems a little fantastic to you, remember this is the man who thought it was possible to build a rocket ship for a fraction of what it costs other companies — and then did it. Today, his SpaceX company has years of business worth billions of dollars booked, while those others are crying for customers. Saying “It can’t be done,” to Musk is like telling Congress to stop spending your money.

For all his genius, not even Elon Musk can overturn the laws of physics. All transportation devices have to deal with friction losses and wind resistance. As speeds increase, so does friction, but the real enemy of high speed travel is wind resistance. Aerodynamic loads increase with the square of speed. That’s why it takes 4 times as much power to punch a hole in the air at 100 mph than it does at 50 mph.

The HyperLoop doesn’t repeal the laws of physics; it finds new ways to minimize their effects. It’s one of those “Don’t raise the bridge, lower the river,” kind of things and it’s brilliant. Let’s start with wind resistance. The HyperLoop will consist of a steel tube hundreds of miles long that has a partial vacuum inside. Less air means less wind resistance. Less wind resistance means higher speeds with less power.

Part two of the plan eliminates all the wheels, axles and motors that cause friction in regular vehicles. Instead, the transportation modules inside the HyperLoop tube will “float” on a thin layer of air, slashing friction to nearly zero. Instead of motors, the train will be propelled by electrically powered linear accelerators installed along its entire length. Once again, the idea is brilliant. But will it work?

Musk says passengers in his HyperLoop will be whisked along in complete comfort. But skeptics point out that they will be sealed inside windowless pods during the journey. Those who suffer from claustrophobia shouldn’t buy a ticket. There will be no beverage service, no restrooms and no possibility of moving around during the journey. Furthermore, they will be bombarded by the sound of what little air is left inside the tube rushing by at near supersonic speeds.

While Musk assumes the ride will be serenely smooth, in reality the alignment of the tube will have to be virtually perfect over its entire length for that to happen. Hello? We are talking about California here, a state known for its frequent seismic activity. Then there are considerations like how to keep the HyperLink tube sealed against air leaks and safe from vandalism.

The test track is designed to answer all those questions and win over the doubters. If the idea is validated, Musk says a Hyperloop along the heavily traveled I 5 corridor could be built for about $8 billion. Contrast that with the $64 billion the Amtrak high speed rail line scheduled to begin construction soon is supposed to cost. When was the last time a government project came in on time and under budget? Of course, Musk’s numbers don’t include the costs of developing his idea and making it a reality.

Elon Musk’s greatest gift is spinning wondrous tales about what could be and convincing people to invest today in his promise of tomorrow. Then he uses the funds raised to make tomorrow happen. So far, more people have made money investing in Musk and his dreams than have lost it. When the HyperLoop Transportation Technologies IPO takes place, will you be on the phone to your broker, placing a “buy” order? Or do you think the HyperLoop is mostly hype and hyperbole?