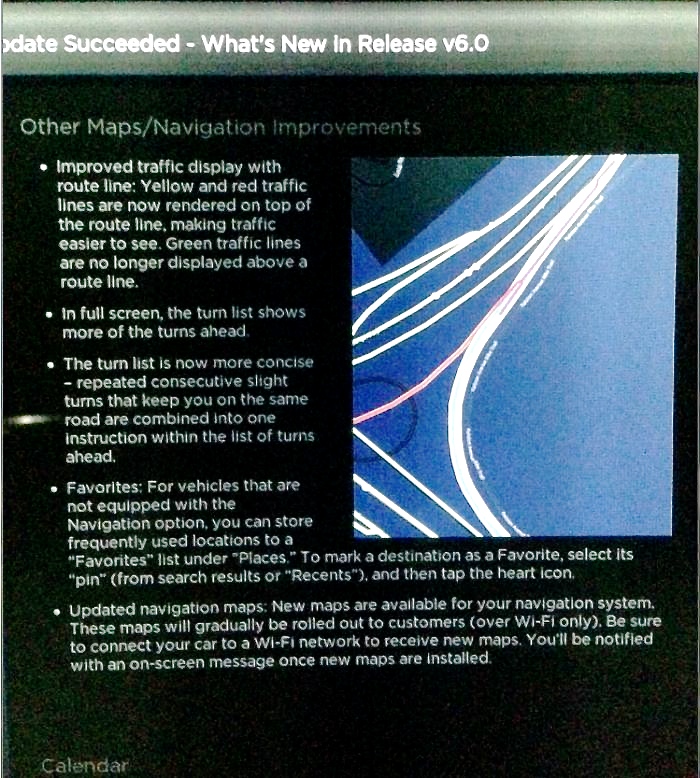 Leaked photos of the much anticipated Firmware 6.0 suggests that keyless driving, calendaring and traffic-based navigation will be making its way to Tesla Model S owners.

Updated Sep. 11, 2014:  It looks as if the release of Tesla Firmware 6.0 is imminent as suggested by the most recent notes from the Tesla Model S iOS app update.

It’s been well known that Tesla Motors and Apple have had a long standing relationship with one another. Through rumored discussions of a buyout between Tesla and Apple, to the much publicized employee-grab that saw many Apple employees make their way to the startup carmaker, Tesla Motors has rooted itself into the Apple ecosystem.

It comes as no surprise that the next release of Firmware 6.0, currently in beta testing, is rumored to integrate with Apple’s iOS Calendaring system and the new generation of TouchID allowing Tesla Model S owners to remote start the car through digital fingerprinting technology.

The following screenshots, sent via a tipster to website Electrek.co, confirms these features and more.

Sources tell us that Firmware 6.0 will start reaching Model S owners a month following the release of Apple’s upcoming iOS 8, slated for mid-September of this year.