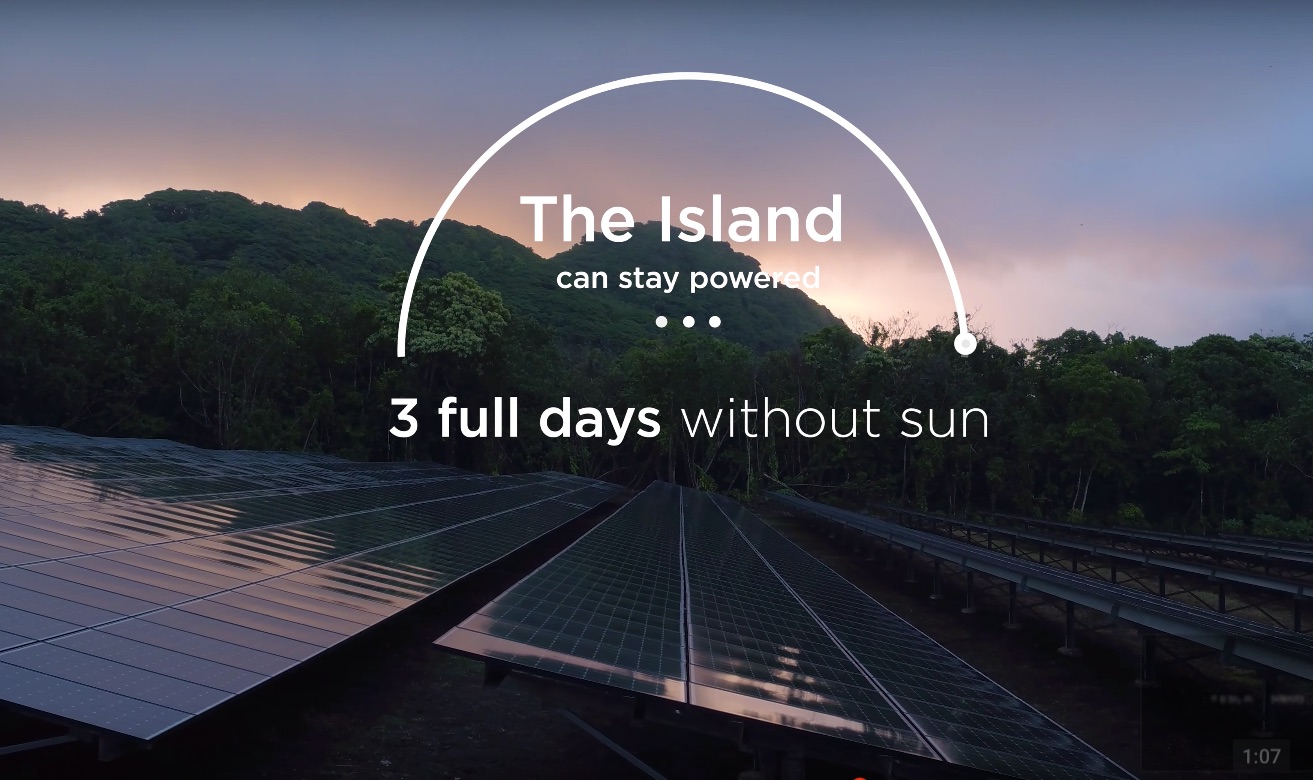 Tesla’s subsidiary, SolarCity, is at the end of a one-year solar energy microgrid project on the American Samoa island of Ta’u that, at 1.4 megawatts, can cover “nearly 100%” of its 600 residents’ electrical needs. Its benefits may be life changing for residents of Ta’u.

Ta’u is a rectangular island 10 km. long and 5 km. wide. In the distant geologic past, the south side of Ta’u collapsed, leaving dramatic 500 km. high cliffs that rise directly from the southern sea. Craters punctuate the island’s wild, thickly forested interior, known for its steep slopes and gullies. Terrain and bush can change quickly, and most of the upland area is inaccessible. American Samoa was first visited by European explorers in the 18th century, but its islands have been inhabited for over 3000 years. Today, at about 340 persons per square km., American Samoa is the second most densely populated South Pacific entity, after Tuvalu.

The island’s residents have acquired power to date largely through generators fueled by diesel. Diesel in itself is made from chemicals including sulfates, ammonium, nitrates, elemental carbon, condensed organic compounds, and even carcinogenic compounds rich in heavy metals such as arsenic, selenium, cadmium and zinc. Diesel exhaust poses major health hazards, contributes to climate change, is costly to ship, and can lead to frequent temporary blackouts. With a dramatic decrease on diesel reliance, Ta’u, through the SolarCity renewable microgrid, will experience valuable community life enhancements that can increase local control and community independence.

Grid stability in a remote location

Energy efficiency is an important component of a renewable microgrid transition. Energy storage is key to renewable island and remote community microgrids. The Ta’u integrated microgrid –- 1.4 megawatts of solar power and 6 megawatt hours of battery storage from 60 Tesla Powerpack, alongside smart controls to enable load shifting— will become an important component of the Ta’u community’s transition to energy independence.

Maintaining grid stability with renewable integration has proved challenging in many other remote island cases in which energy reliance has shifted to a microgrid. SolarCity will likely use a phased integration approach that will initially bring a small amount of renewable technologies online, as it works to balance the system, and then continue to step up their renewable penetration by integrating more solar resources alongside energy storage and advanced controls. For example, on King Island, Australia, Hydro Tasmania has overcome many renewable integration challenges to incorporate more renewable resources into the system. Simon Gamble recalls, “We started adding renewables 18 or 19 years ago, and the challenges have been technical. We had to solve the problems we uncovered as we went.” Tesla’s Powerpack system will allow the island to use stored solar energy at night, meaning renewable energy is available for use around the clock. Procuring and transporting new technologies and equipment, which has been an issue with other remote island locations that have integrated a renewable energy microgrid, may not present as many challenges for Ta’u, due to the SolarCity involvement. Often, only one or two operators live nearby, so if major technical issues arise, teams must fly in to address the problems. Having SolarCity as a partner can diminish such technical issues on Ta’u.

How a SolarCity microgrid can alter traditional microgrid instability

Although some renewable systems have found success, other communities face challenges transitioning from a fossil fuel reliance to a microgrid. A SolarCity microgrid has the capacity to overcome these challenges due to the influence and reliability of Tesla Energy. Microgrid systems foster community resiliency and stability. Power electronics and control systems enable a more stable grid through better controls. At the same time, relying more on local resources and less on imported diesel increases overall resiliency for the Ta’u community. Transitioning to renewable microgrids can reduce costs. Research indicates that relying on more diversely and renewably powered microgrids has led to reduced diesel usage, electricity prices, and operating costs. Creating a project like the SolarCity microgrid on Ta’u, with the requisite business plan to lower overall costs and attract investment, is a difficult and lengthy task. However, it has clearly been made easier with SolarCity’s deep understanding of inherent necessary technologies, processes, and pitfalls.

Fa’a Samoa or the Samoan Way is the foundation of Samoan society, culture, and heritage. Fa’a Samoa customs and culture are over 3000 years old and have changed very little over this period. The Fa’a is tenaciously defended by those who have chosen to remain in their home villages rather than to emigrate to the U.S. Fa’a culture and customs are based around the mutual respect given to elders, the church, visitors, and the extended family. The SolarCity grid will enhance the Fa’s or Samoan Way and reinforce the foundation of Samoan society, culture, and heritage.

SolarCity, alongside American Samoan and U.S. authorities, including the Department of Interior, has provided the upfront costs of designing, delivering, installing, and maintaining the solar microgrid. Their customers on Ta’u will pay a fixed monthly fee for clean solar power and start realizing cost savings from day one without the hassle of owning and maintaining their own power system. Removing the hazards of power intermittency will offer a tremendous difference in the lives of Ta’u residents.

“I recall a time they weren’t able to get the boat out here for two months,” said Keith Ahsoon, a local resident whose family owns one of the food stores on the island. “We rely on that boat for everything, including importing diesel for the generators for all of our electricity. Once diesel gets low, we try to save it by using it only for mornings and afternoons. Water systems here also use pumps, everyone in the village uses and depends on that. It’s hard to live not knowing what’s going to happen. I remember growing up using candlelight. And now, in 2016, we were still experiencing the same problems.”

As Tesla owners, solar advocates and obvious believers in the future of sustainable energy, we’ve partnered with a service for estimating solar costs based on one’s location and energy requirement. Please consider supporting our solar-focused affiliate partner and fan to Teslarati by getting a cost estimate.