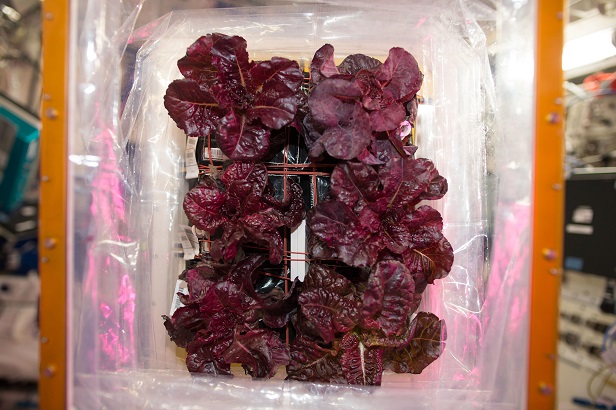 Future astronauts on Mars could grow their own lettuce for salads. Credit: NASA

Elon Musk wants to send a million people to Mars, and we would love to see that happen sooner rather than later.

But what will we feed them?

Since 2014, NASA has been busy studying the development of different types of plants on the space station. Using a special plant-growth chamber, called Veggie, the agency is trying to perfect the art of making space salad.

A new study published last week in the journal Frontiers in Plant Science explains that lettuce grown in space is as nutritious and tasty as any variety grown on Earth.

“The ability to grow safe, fresh food to supplement packaged foods of astronauts in space has been an important goal for NASA,” reads the paper.

Currently, astronauts on the space station rely on prepackaged food to sustain them during their time on orbit. (They also enjoy occasional treats sent up on cargo resupply missions, such as fresh fruit.) But with the help of plant chambers like Veggie, astronauts could one day crunch on healthy salads.

Packaged foods are nutritious enough, but do not have everything a person needs (or wants). The ability to have fresh fruits and vegetables on Mars could do wonders for an astronaut’s health. Not only do plants provide key nutrients, but they could also help life-support systems on any potential Mars city by helping to scrub carbon dioxide from the atmosphere.

NASA and other space agencies around the world have been studying plants in space almost as long as we’ve been sending astronauts to space. But with the construction of the space station and advent of the veggie chamber, the research can track growth over longer periods and with more crops.

Organisms grow differently in space, so understanding how plants respond to microgravity is an important step toward ensuring that future astronauts will have the ability to grow their own crops in space, especially as we start sending humans back to the moon and onto Mars.

From 2014 to 2016, researchers sent batches of “Outredgeous” red romaine lettuce seeds to space, to see if and how well they grew inside the Veggie chamber. In space there’s no gravity or soil or rain like the plants here on Earth rely on. There’s also 16 sun rises and sun sets in space, so the crops will need steady light to help them grow. Where does that come from?

The Veggie chamber is outfitted with special LED lights, tuned to a specific wavelength in order to help the plants grow. (Set to 16 hours of  light and 8 hours of darkness.) Plant pillows are placed in the chamber, each equipped with its own water supply, fertilizer, and seeds. The astronauts can control the amount of water each plant receives and other settings like humidity.

The lettuce plants were allowed to grow for approximately one month before being harvested and sent back to Earth for testing. (Yes, the astronauts were allow to eat some, after they were deemed safe.)

When compared to ground-based experiments, researchers found that the crops contained the same level of nutrients that the terrestrial crops did. (Not to mention the same microbes.) The only recorded differences was a slight variation in mineral content, in particular in iron, potassium, and zinc.