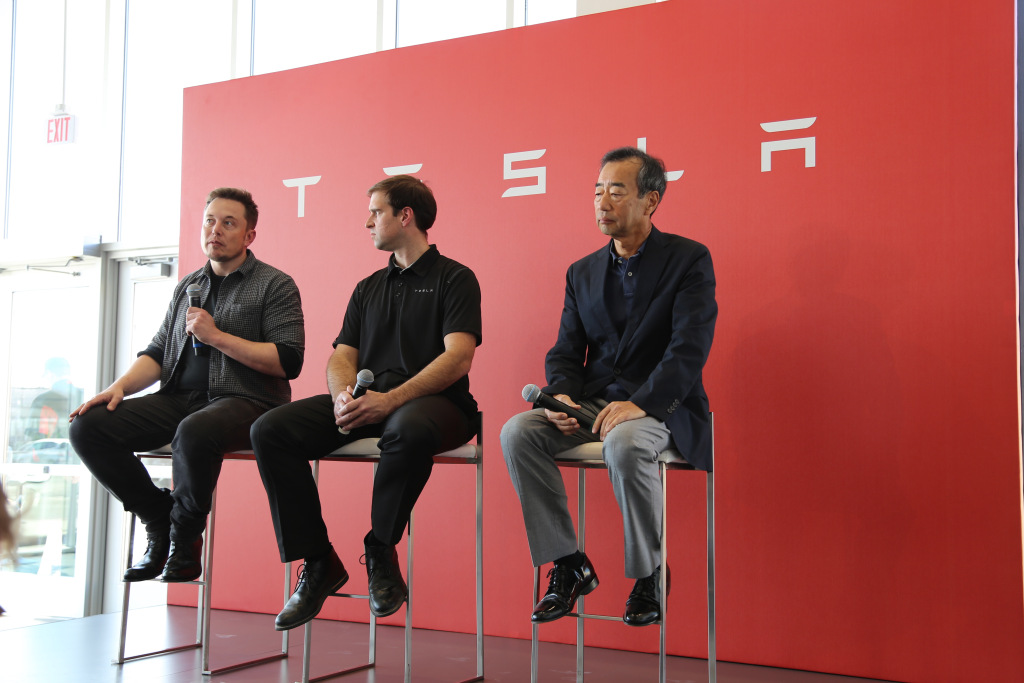 The world is beating a path to the Tesla Gigafactory in advance of the grand opening celebration on Friday. Wednesday evening, Elon Musk, JB Straubel, and Panasonic executive vice president Yoshihiko Yamada took questions from the press in a wide ranging discussion that covered many topics. Here are some of the highlights.

Then he added, “It may sound a little strange and sentimental but I find it to be quite romantic. The final shape will be a diamond, aligned on true north, I like that. It seems incredibly romantic. By the way there’s 10,000 wild horses in the area. They just hang out. We have construction ponds for water, so its quite cool to see the horses drink from the construction ponds.”

Yamada: “Three years ago I thought this gigantic Gigafactory idea was crazy. Because then the production of the factory would exceed production of the industry. I thought it was a crazy idea. But I was crazy, and I was wrong after seeing extreme success of the announcement of the Model 3 and the strong demand.”

Straubel: “We’ve spent a lot of time on this actually. It’s kind of interesting. There are a bunch of trade offs. There are some things that get better when you make the cell size bigger, and some things that get worse. 18650 was sort of an accident of history. That was what was standardized for early products. So we revisited all of those trade offs and came to this size, which is quite a bit bigger. If you have them next to each other, the actual volume of materials inside is substantially more. And overall it’s about cost optimization.”

Musk: “It really comes from the first principles of physics and economics. That’s the way we try to analyze everything. To say like if no cell existed in the world, what size should it be? What is the size that would achieve the product characteristics we’re looking for, but would be fundamentally optimal? 18650 is not optimal.”

Paying For The Gigafactory

“One part of that is working with strategic partners like Panasonic. We are seeing very good participation from our supplier for the capital costs of the Model 3 ramp. So we are going to fund it by Model S and Model X revenue, with money we have right now, with potentially a modest capital raise, but not a significant one. In a nutshell, there may be a capital raise, but it’s not going to be a huge one.”

“But since we started discussion on the Gigafactory that’s completely changed. One example, is production capacity is now two or three times more. Why? Because Tesla and manufacturing people worked together. We are discussing these details. This type of relationship is quite new for business. We are not the simple buyer and supplier relationship.”

Musk had a great deal more to say about ramping up for production of the Model 3, solar power and energy storage. We will cover those topics separately.