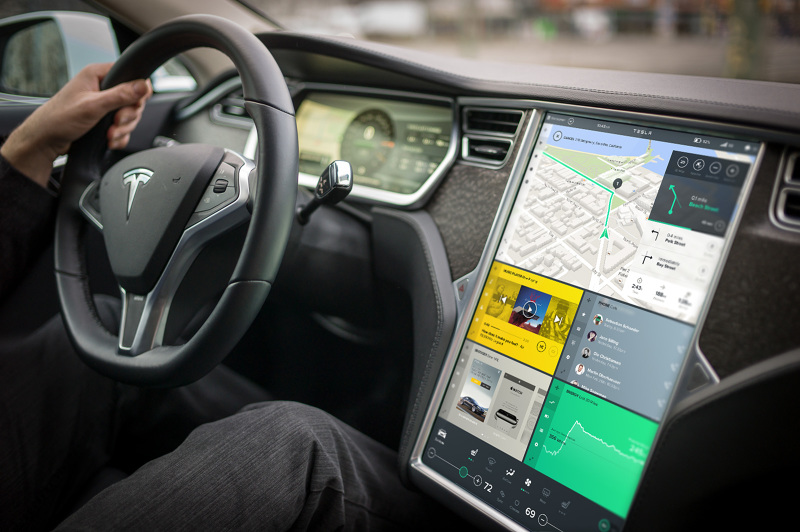 One of the announcements that Elon Musk made at a press conference to address ‘range anxiety‘ was that a fresh new user interface (UI) design will be arriving over-the-air in the next major release of Tesla Firmware 7.0. There’s no question that the Model S is one of the most modern and technological vehicles in the world but if German design house Bureau Oberhaeuser had its way, they’d replace the outdated Web 2.0 graphical user interface buttons with a design that’s flatter, cleaner and inline with the latest design trends.

Remember the days when Apple ditched their ubiquitous skeumorphic designs – a UI design that has seen six generations of iOS and adopted worldwide by brands, even Tesla – for the more modern look that we know of today in iOS8? Chances are these are the types of styling cues that will be making its way into Tesla Firmware 7.0.

Not thoroughly pleased by the Tesla Model S UI, the team at Bureau Oberhaeuser challenged themselves to reinvent what the car’s infotainment system should look like. The UI follows a design concept that allows each widget to be drag and dropped across a dynamic grid. Each widget automatically resizes to the snap point that the widget resides within. The monochromatic icons create a nice and simple look that’s more in tune with the latest UI design trends among digital devices. Multiple configurations of the screen layout can be retrieved through a selection menu towards the top left corner giving users the ability to customize the arrangement of various widgets.  Incidentally, this design concept is what the folks at TeslaApps are doing with their web-based dashboard solution for the Model S.

Like buying a new set of designer duds, the Tesla Model S will completely reinvent itself through a simple OTA update in Tesla Firmware 7.0. Simply amazing.