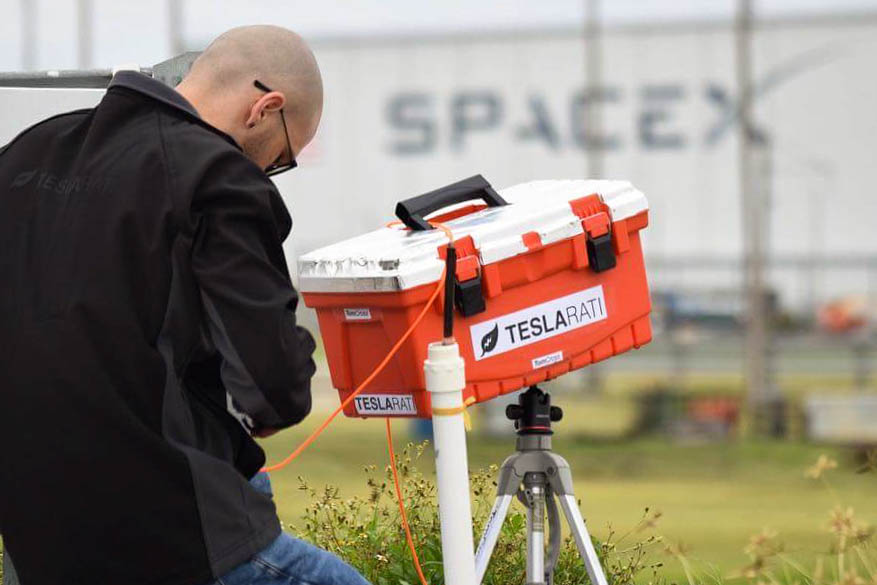 As a launch photographer that has a work schedule as volatile as the rocket fuel being used by the very same subject matter that I’m trying to capture on film, having a plan-B in place comes with the territory. For hours, everything can appear routine, as I cycle through my usual list of photo preparations. But in the blink of an eye, the launch team could discover an issue that disrupts the entire day. That couldn’t be truer than my recent attempts to cover the highly anticipated SpaceX Falcon Heavy static fire test.

In those instances when unexpected circumstances can change long-prepared plans, any work that has been conducted up to that point has to be repeated at the next launch attempt. It happens often and it’s part of the gig. Needless to say, this profession takes immense passion and patience. It also helps to have a home life that’s equally patient and supportive.

The whirlwind of excitement began in early January when SpaceX’s Falcon Heavy was scheduled for its first test fire from the Kennedy Space Center in Florida. Checking Twitter in the pre-dawn hours of an overcast Cape Canaveral day, I quickly learned that any opportunity to hear the deafening roar of Falcon Heavy’s 27 Merlin engines ignite would have to wait until the next day. The weather was unpleasant; the skies were saturated in a thick haze of dreary gray, and the birds were eerily silent around Kennedy Space Center’s neighboring Merritt Island Wildlife Refuge.

Falcon Heavy’s test wasn’t meant to be that day. Or in the days following.

The nature preserve surrounding the Kennedy Space Center has well-maintained gravel roads, pathways, boardwalks, and pull-offs, each with gorgeous views of an untouched Florida landscape. It’s a popular location for birdwatchers and wildlife photographers.

My journey to this location involves an hour-long drive through suburbs and rural areas, and a $10 entrance fee to the nature preserve. Gone are any signs of civilization, drowned in the silence of a peaceful Floridian backdrop of marshland and the occasional alligator making its way across gravel roads.

The weather ahead of Falcon Heavy’s second attempt at a test launch couldn’t be more perfect. Being one of the first to arrive on the scene, I had ample time to claim stake to a perfect vantage point for the perfect Falcon Heavy shot from the rooftop of my vehicle. Five Instagram stories into my stay and admittedly a few shameless selfies, the rest of the photojournalists began to arrive. It wasn’t long before a group of vacationers and sea of photographers arrived with cameras in tow and sights set on the Falcon Heavy launch pads.

To get a better view of the rocket engines during the static fire, I posted on top of my vehicle. (Photo/ Marcus Cote, @marcuscote_photo)

As Falcon Heavy began venting LOX (Liquid Oxygen), a frenzy of rapid-fire shots immediately followed. The beast was breathing and would soon fire, so we thought.

A comment from one of the people in the crowd suggested that the large plume of LOX coming from SpaceX’s Falcon Heavy was a normal occurrence. The rumors began trickling in: ‘Falcon Heavy scrubbed for the day’ came first. Then, ‘dynamic loads’ cited in the next rumor.

Call it optimism or denial, every ounce of me rejected the notion that Falcon Heavy would not be firing today. Afterall, we saw the rocket venting and there was no confirmation of any sort that was making its way out of Cape Canaveral.

It wasn’t until we received word that a bug related to the hold-down clamp was the root cause for the cancellation. These clamps serve the critical function of firmly holding the rocket to the launch pad during static fire testing. If this component malfunctions, the rocket could potentially leave the pad. The attempt was scrubbed and rescheduled for another day.

My journey home had me pondering what I’d change for the next attempt.

The day had come for yet another Falcon Heavy static fire attempt. This time, I was armed with a mental image of the exact location of where to park and the exact steps needed for set up. I remembered to frame the image in a way that allows me to crop-out SpaceX’s competitor – United Launch Alliance’s (ULA) launch facilities.  While we’re granted press access to SpaceX launches, we are prohibited from taking images of other companies’ launch facilities from the location of SpaceX’s launch pads. The same is true while we are in ULA locations: we can’t take images of SpaceX. So I maintain this unspoken rule while photographing Falcon Heavy out of respect for SpaceX and their brand. In some cases, it’s fitting to have the additional launch facilities in the image, but for my purposes of covering Falcon Heavy, it’s not. 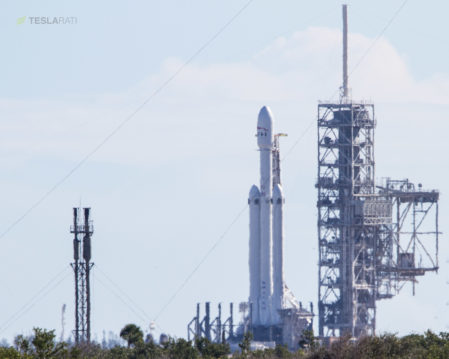 Part of my planning is to make sure that I can crop out ULA launch facilities. (Photo/TomCross) 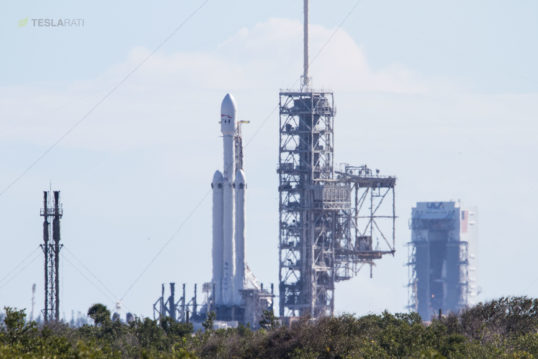 Falcon Heavy vertical at SpaceX Launch Complex 39A with ULA launch facility in the background. (Photo/TomCross)

Approximately 40 minutes into my drive to Cape Canaveral, or 15 miles from my setup location, I received a tweet that informed me of Falcon Heavy’s cancellation. I made a quick U-turn and hurried back home, where I signed up for SpaceX’s upcoming HispaSat launch that’s slated for mid-February. SpaceX is still serving customers regardless of Falcon Heavy’s delay and the rumor of Zuma’s failure.

The same sequence of extreme excitement that quickly translated to disappointment occurred in the days following. After a few more cancellations, I was in much need of a visit to the happiest place on Earth – Disney World.

If you ever get the opportunity to visit the Disney World theme parks in Orlando, Florida, a ride on Mission Space at Epcot is a must, especially if you’re a space nut. The ride is a launch simulator that takes you around the Earth and Moon, as you awake from a hypersleep state and find yourself inside an asteroid field. The ride is incredible. In fact, local astronauts along with NASA helped Disney’s Imagineering team develop the ride. Most notably, Story Musgrave who I had the pleasure of having coffee with in the past, was commissioned to help with the ride’s theme.

As Falcon Heavy’s schedule continued to drift further into the future, United Launch Alliance (ULA), SpaceX’s competitor, was launching a missile-detecting satellite to geostationary orbit about 23,000 miles in altitude. I hadn’t planned on attending this launch but the weather was beautiful and I was long overdue for some photography fun.

I gathered my gear, drove over to the coast to try out a new public location called Parrish Park / Max A. Brewer bridge. I made sure to explain who ULA was to our Instagram followers after a poll suggested that the majority of our fans did not know who the ULA was.

As I arrived at my new location, there were already rows of vehicles lined up along the shoreline of the river. I drove across the bridge on several occasions to find the perfect spot for stationing my cameras. I got in position 45 minutes before launch, unloaded my gear, attached my Miops Mobile Remote for a streak image, and tested the camera exposure setting. My fingertips were becoming increasingly more numb from prolonged exposure to the cold nighttime air, yet I still managed to attach my other camera to the tripod.

A couple walking past complimented me on my setup. After a few shots with my zoom-camera, the couple began walking toward me and asked if I heard about the launch scrub.

“Come on, it’s been too much lately!” immediately sounded off from my mouth. I was in disbelief. Sure enough, word soon got out that the launch would be rescheduled.

I heard the shutter of my long-exposure camera slam shut, as if it too was in utter disbelief of the recent events taking place, or lack thereof. I packed up and drove home, left only with the images in my mind of what that evening’s image could have looked like. And a life lesson that can only be attained through experience. 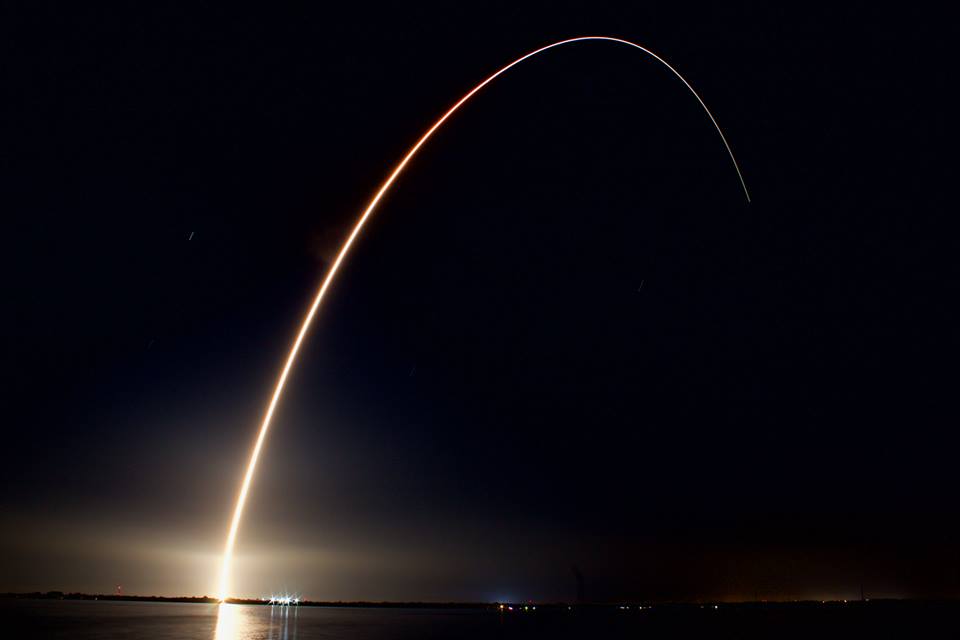 A streak image of a ULA launch in December 2016. (Photo/TomCross)