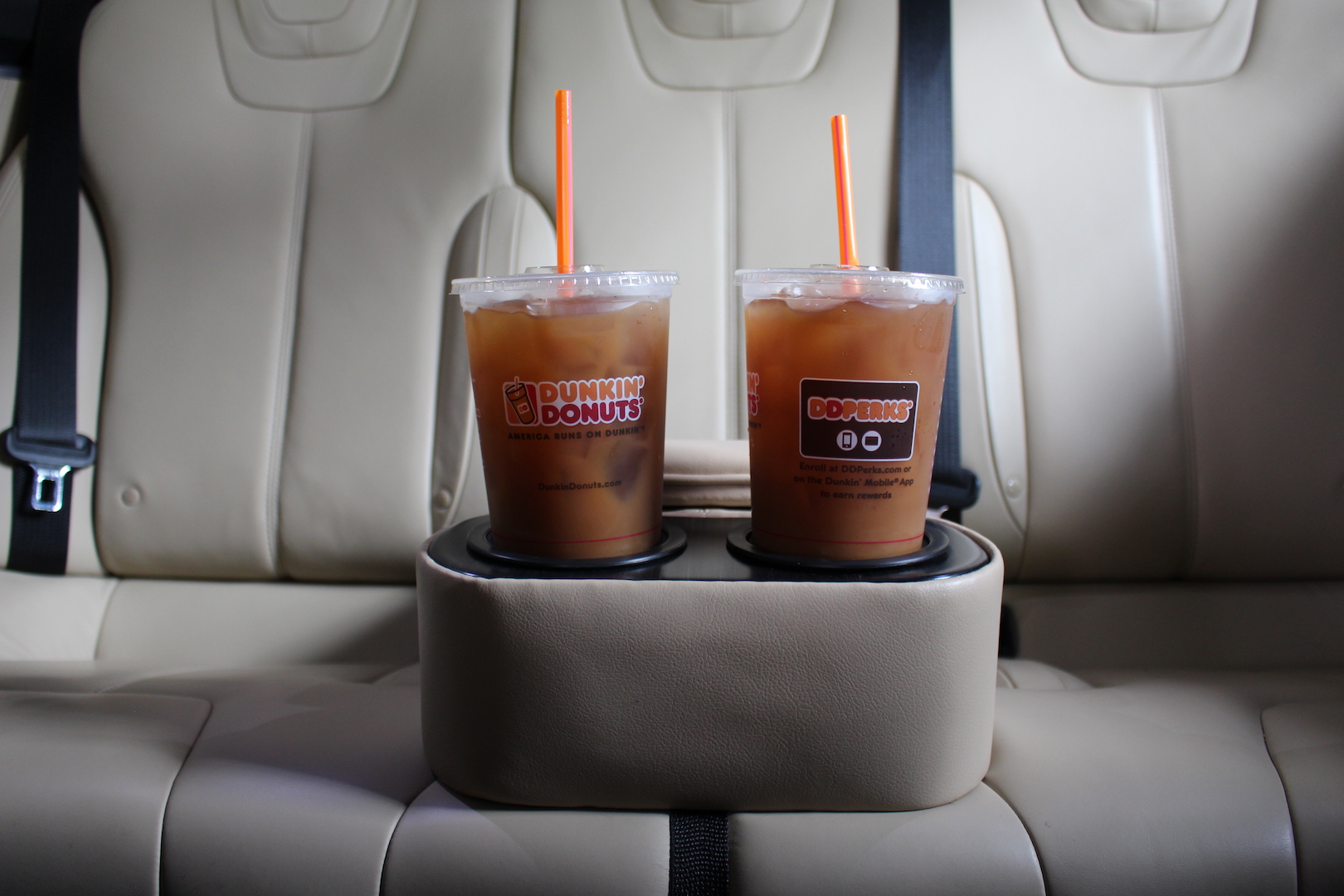 I’ve had an aftermarket center console installed on my Model S for some time now and have grown to love it, so when I found out that the manufacturer came up with a companion insert for the rear seats, I decided to give it a go. Here’s my review of EVannex’s new Rear Center Console Insert (RCCI) for the Tesla Model S.

The Model S has fantastic leg space and head room for rear passengers. The seats are also quite comfortable, but Tesla in my opinion has left out some common amenities things that are expected by most passengers. At the top of the list of what’s missing are arm rests followed by cup holders and storage. Other amenities such as USB ports to charge portable electronics and rear climate controls are also missing. The RCCI provides several of these amenities for rear passengers and all at a reasonable cost. Poking around their site I can see they also offer an optional USB solution though I can’t comment on it since I haven’t seen it in person. Tesla will also have to figure out how to provide climate controls to rear passengers one day.

The RCCI is a simple but elegant product. It has two cup holders at the front with a ribbed insert to securely hold drinks of several sizes, and then a padded arm rest that doubles as a lid for the storage area below.

A customizable trim that matches Tesla’s interior trim surrounds cupholders that are spaced far enough apart to allow for larger beverage containers. Removable rubber inserts line each of the cupholders allowing you to adjust grip as needed simply by removing them. One of the issues I had with the front CCI was that the grip from the rubber inserts were so strong that it would lift the cupholders out of console itself when attempting to remove my beverage. Not so anymore with the RCCI as I’m happy to report that they are now firmly attached to the main console assembly. The storage area is quite spacious at 10.5” L x 6.25” W x 4” D (260mm x 158mm x 102mm) and easily fit a mid-sized hardcover book as well as several kindle and iPad mini type devices along with other odds and ends. Note that a full size iPad will not fit in this space. When closed the RCCI provides ample space for elbows at about the same height you’d expect from any other rear seat arm rest. I own what I’d like to refer to as a vintage Model S or more formerly known as a Classic Model S and the front arm rests on it are too high, too hard, and too far back for my taste. The RCCI provides more padding, a better height and your elbow lands in the middle of the arm rest where it belongs. The RCCI cover itself is of sturdy construction and actually quite heavy. They rest on padded areas of the overall frame which helps prevent it from bouncing around or making noise when driving.

The RCCI is simple to install. EVannex provides a great installation video showing one the tips and tricks involved with getting the unit installed and secured.

I find that EVannex typically provides thorough instructions on how to install their products but at the expense of being too thorough and “overkill” at times. As seen in their installation video, they recommend crafting a special hook out of a household coat hanger that is to be used as a guide for the RCCI mounting straps. I did a quick visual check and determined that I could simply push the restraining strap through the seat using my hands instead of going about to fabricate my own tool out of coat hangar. Once the strap is seen from the trunk of the vehicle, it can be fastened to the child-restraint clips found on the back of the rear seats.

You tighten this connection by sliding the simple buckle until you have it secure enough. I found this part to be a bit awkward and would have preferred some kind of ratcheting buckle or system to help with the tightening. The strap was also quite long which made it difficult to stow.

The front connection is a simple hook that clips onto the front of the seat. While you could forgo the front (or even back) hooks I wouldn’t skip either. Drinks, and perhaps stuff inside the RCCI, would not remain in place without both hooks securely attached. The front hook was easier to tighten and the connection was simple. The only downside is that you will be able to see the strap if you happen to look in that direction, but you’ll soon forget about it.

While the installation was simple and fairly quick, it’s not something I’d want to do on a daily (or even weekly) basis. Fortunately we usually have 3-4 people in the car and driving with 5 is a rare event so I wouldn’t expect to have to remove the RCCI very often. You should think about your own situation to see if this would be an issue.

The RCCI to me is best when you don’t have to repeatedly install it and then take it back out.

Prices on the RCCI ranges from a low of $309 for the basic piano black finish to $349 for the carbon fiber finish. I opted for the RCCI with Obeche Wood Matte trim with Tan upholstery which was priced at $329.

The RCCI is priced well as  it provides similar functionality to the front Center Console Insert (CCI) but nearly half the price.

Tesla also offers their own Premium Rear Console which we also had a chance to review, but we found the $650 price a bit steep. Since Tesla’s rear console is essentially the center armrest made to fit in the rear, all of the deficiencies that come with the front console such as cupholders that are too close together, too shallow, and hard arm rests, also carryover to the rear. We also found Tesla’s single-strap mount to be inadequate when it came to securing the arm rest. See our review here. The RCCI has a solid feel because of its sturdy construction. When the RCCI is on its own and not installed, the overall shape and angles could look odd, but once you have it in place you quickly begin to realize that they had to accommodate for the downward sloping rear seat, and come up with a design that would fit the native contours.

One concern I had was whether the hinge that attaches the armrest to the base of the unit could overextend and break. The hinge itself is almost the full width of the RCCI and uses several screws to attach the lid to the base.

The hinge is not the type that prevents itself from being over-extended, but the RCCI opens at the front edge and presses up against the back seat before it even hits a full 90 degree angle. When properly installed there’s no chance of over extending this hinge as the rear seat is in the way of opening it up too far. The RCCI is a wood frame covered with trim, upholstery and cloth . The bottom is covered with a black felt cloth similar to the material found in the front and rear trunk of the Model S.

Neither the felt nor the upholstery seemed like they would lend to rubbing or scratching of the leather, but as with anything you leave or secure to a seat for a long time it may leave a small impression. The most likely culprit for an indentation on the seat seems to be come from the front mounting strap. Also the front hook is a painted black metal, it’s wide but not coated with fabric or any other kind of material. A car seat, left long enough, will leave some lasting dents in your seats. The RCCI has the potential to do that too although it has a few things working in its favor: There’s no kid sitting in/on it, its much lighter than a car seat (about 8 lbs) and it has a wider flat base to better distribute the pressure.

Putting the RCCI to the Test

I loaded up my RCCI with my books, iPads, Kindles and my favorite beverages and headed out for some spirited driving 🙂 I launched the car many times, came to a quick (but safe!) stop, took sharp turns, accelerated hard into corners, and drove on some typical New England poor back roads. Through the entire drive the RCCI remained in place and best of all my full-sized Dunkin’ iced coffees stayed where they belong. Not a precious drop was spilled. I heard no creaking and could not detect shifting of  the console. Overall the installation seems very secure and I believe it would hold up to most driving styles.

So, with all that said, here’s how the EVannex RCCI scores.