Rivian’s R1T electric pickup truck took to off-road and speed test proving grounds in Arizona to assess the vehicle’s suspension and performance capabilities ahead of next year’s planned production.

Rivian’s Director of Vehicle Dynamics, Max Koff, put R1T’s quad-motor system, with independent air suspension and hydraulic roll control functionality, to the test through a series of challenging and exhilarating off-road trails. The company’s all-electric pickup boasts a versatile air suspension that can adjust in height and provide clearance between eight inches and high as fourteen inches to optimize for range efficiency and off-road performance. 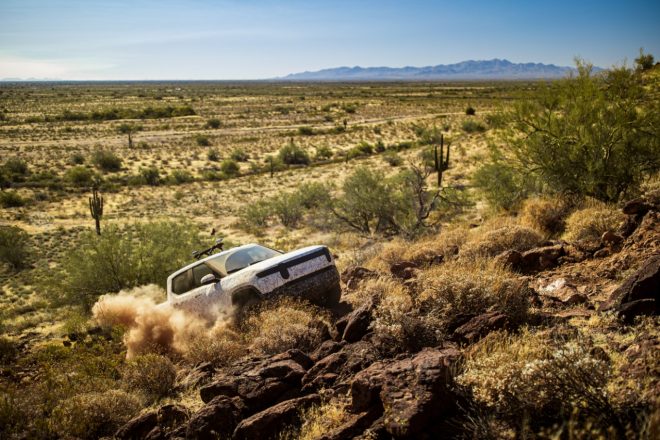 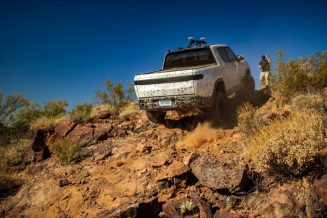 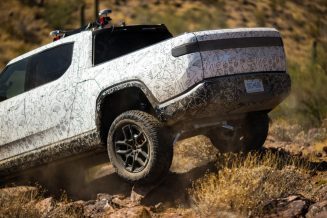 The Arizona testing ground was the ultimate test for Rivian’s claims of an off-road adventure. With plenty of challenges, Rivian shared a video of the R1T being able to make its way up a steep grade of a rock-covered hill and maneuver through an equally challenging descent.

“What you might consider punishing it off-road, but we’re learning. We’re taking all that data in, and we’re constantly developing, making it better on-road and off-road,” Koff explained.

The R1T is more than a durable and robust truck that can handle harsh terrain. It is a high-performance automobile that is capable of 0-60 in just three seconds—powered by the four electric motors that offer 200 horsepower at each wheel and a 180 kWh battery pack that has been developed by Rivian’s team of battery engineers. 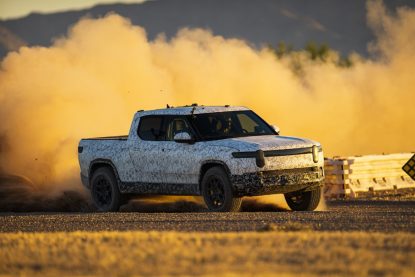 One of the biggest challenges for Rivian was to come up with a design that would incorporate a concentrated and potent battery pack into Rivian’s small, flexible, and compact skateboard chassis. Engineers indicated that the storage of the cells also brought upon other issues that included cooling the pack assembly in an efficient manner that allows for extended high-performance driving.

Rivian’s development of in-house battery packs allowed the company to “open up possibilities,” one engineer said. This idea enabled the possibility of the battery packs to learn the specific driving styles and charging patterns of its owner to increase the lifespan of the pack, CEO RJ Scaringe said.

It was essential to manufacture a battery pack that could last through the hottest, most-intense driving sessions, but could also maintain its integrity and range capabilities within cold winters. This idea became the main focus of Rivian’s battery team, which ultimately drove Koff’s off and on-road testing session to display impressive results.

The electric automotive market continues to grow, and pickup trucks are becoming a focus of many battery-electric manufacturers whose idea is to create a powerful, high-performance machine that is capable of handling the most strenuous tasks thrown at it. Tesla’s Cybertruck, Ford’s electric F-150, Rivian’s R1T, Lordstown’s Endurance, and other battery-powered pickups will attempt to push their way into a market that is concentrated with petrol-powered machines.

Rivian’s R1T is expected to begin production in 2021.