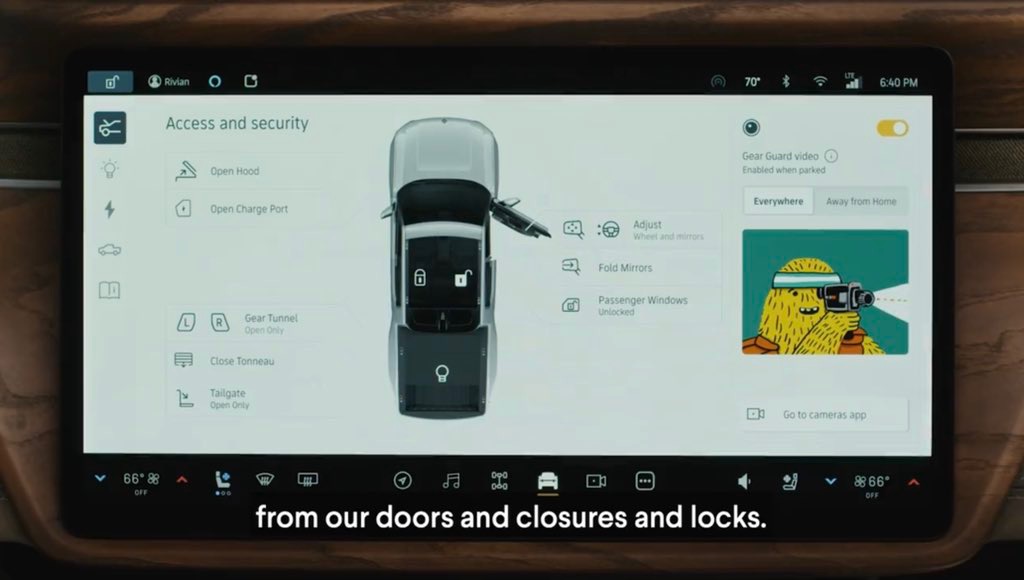 If Tesla owners have Sentry Mode, Rivian owners will have Gear Guard for security. Recently, a Gear Guard buddy was spotted actively working in a seemingly parked Rivian vehicle.

A short clip from Twitter user @D_Love revealed Rivian’s rather kid-friendly Gear Guard buddy at work while the vehicle’s owner is away. The character captured in the short clip was also seen in a Rivian video posted last month. According to Rivian’s Director of UX Design Brennan Boblett, owners can activate a suite of security products through Gear Guard.

The ambiguous animated Gear Guard character, which Rivian has yet to name, has received mixed reviews from the community.

Some electric vehicle fans have noted Gear Guard’s buddy was a little too cartoonish for some, while others believe it’s the perfect character for Rivian’s vehicles. Both sides’ viewpoints have some merit.

Those who support the Gear Guard character believe it would be fun for the family and, specifically, the kids. After all, Rivian’s R1T pickup truck and R1S SUV are made for adventure, and what’s an adventure without a bit of silliness.

On the other side of the fence are those against the animated character. They believe it does not have the right demeanor for something that is supposed to offer protection for Rivian’s vehicles.

Gear Guard has been compared to Tesla Sentry Mode, which uses more menacing graphics when activated. However, Rivian’s Gear Guard may be slightly different from Tesla Sentry Mode and could include some features that require kinder graphics.

Gear Guard seems to be an umbrella term for a list of security features. It will most likely use Driver+ hardware installed in all R1 Rivian vehicles, which includes 11 cameras, 12 ultrasonic sensors, five radars, and a high-precision GPS antenna.

Rivian has not fully discussed Gear Guard’s suite of security features in detail yet. Boblett didn’t say much about Gear Guard features in his video either. However, he did say that Rivian would be “evolving and rolling out new features” through over-the-air updates in the future.