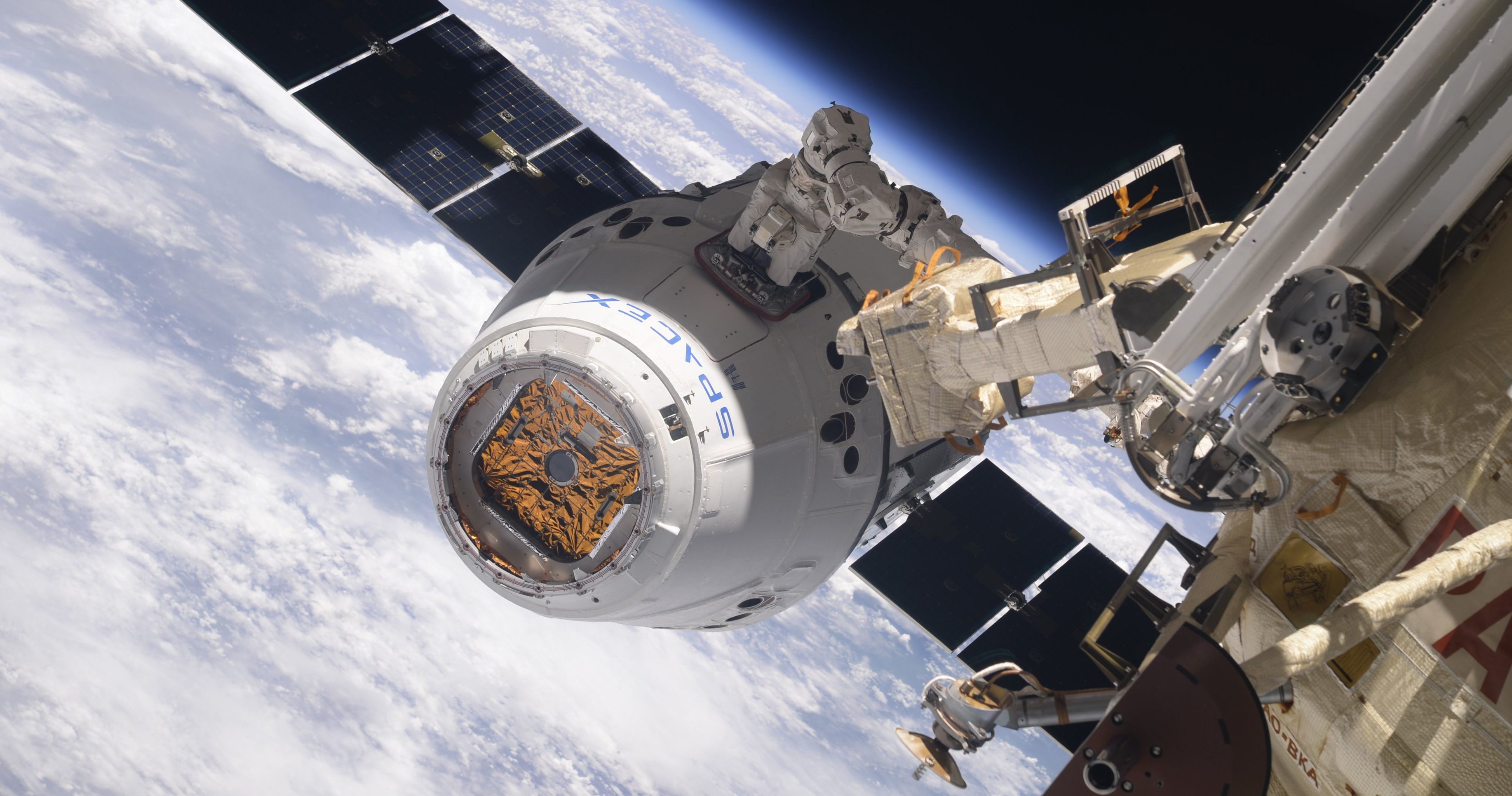 SpaceX’s third flight-proven Cargo Dragon spacecraft has arrived in orbit and is currently making its way uphill to the International Space Station for the 15th SpaceX resupply, scheduled for arrival around 7 am EDT July 2nd. Meanwhile, the company’s new Crew Dragon is undergoing its own earthbound trials, split between an artificial vacuum chamber and parachute drop tests over the California desert.

Following a twilight launch that brought to a spectacular close an era of older, less-reusable Falcon 9 rockets, the Cargo Dragon capsule trunk full of several tons of supplies and scientific instruments were placed into a parking orbit roughly 200 miles above Earth’s surface, trailed by a mesmerizing rainbow plume created by Falcon 9’s first and second stage over their nine-minute journey. 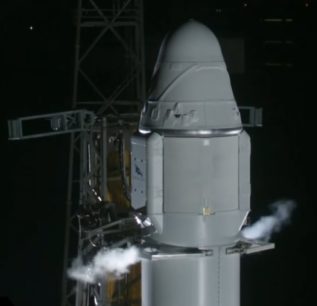 After arriving in orbit, Crew Dragon separated from Falcon 9’s second stage and officially commenced its second orbital mission roughly 25 months after its first, CRS-9 in July 2016. Alongside the three that have now flown successfully, all five of SpaceX’s remaining Commercial Resupply Services-1 (CRS-1) missions will be conducted with flight-proven Dragon spacecraft, two or three of which will see the already-reused capsules fly a third time before being officially retired.

After SpaceX’s first CRS contract comes to an end, currently scheduled for early 2020 with the CRS-20 mission, the upgraded Dragon 2 will take over all future cargo launches. Dragon 2’s cargo configuration is expected to be a slightly different version of the Crew Dragon capsule and trunk, scheduled to debut as early as late 2018, but the specifics are still somewhat hazy. Most probably, recovered Crew Dragon capsules – unlikely to ever been certified to fly NASA astronauts – will instead be refurbished after their first orbital missions, modified slightly to meet the cargo requirements, and then use to complete SpaceX’s CRS-2 contract alongside their crew transport missions.

While its predecessors continue to grow SpaceX’s experience in orbit, the Crew Dragon program is making its own impressive progress towards the first uncrewed and crewed launch debuts in late 2018 and early 2019. DM-1, the capsule tasked with that first uncrewed demonstration, is likely nearing the end of a suite of tests inside NASA’s huge Plum Brook vacuum chamber facilities, ensuring that the brand-new spacecraft behaves as expected in the extreme environment of space. If successful, the capsule will be sent on its way to Cape Canaveral, Florida to begin true prelight preparations for the first time ever, while its trunk – an expendable structure installed at the base of the craft with solar arrays, radiators, and bays for unpressurized cargo – will be sent back to the Hawthorne, CA factory to be outfitted with flight hardware, after which it will ship to Florida one to two months after the capsule arrives. 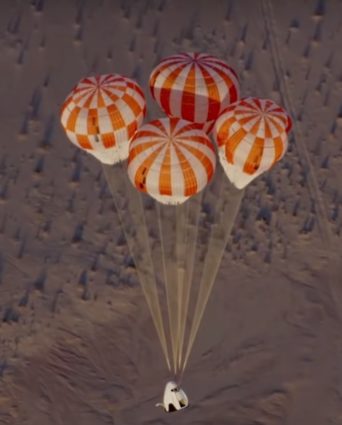 Crew Dragon parachute tests are likely to continue into the summer to ensure NASA certification in time for DM-1. (SpaceX) 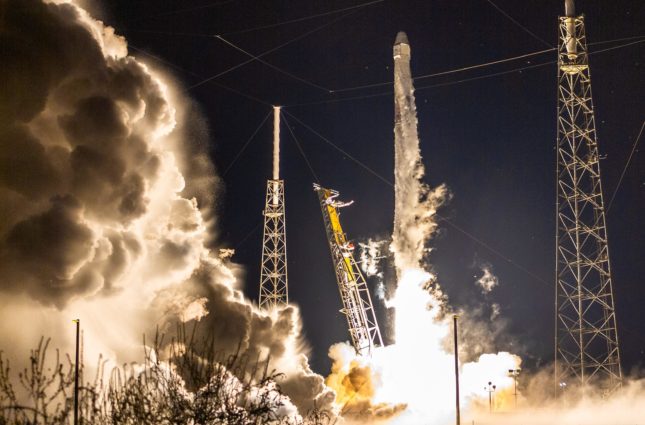 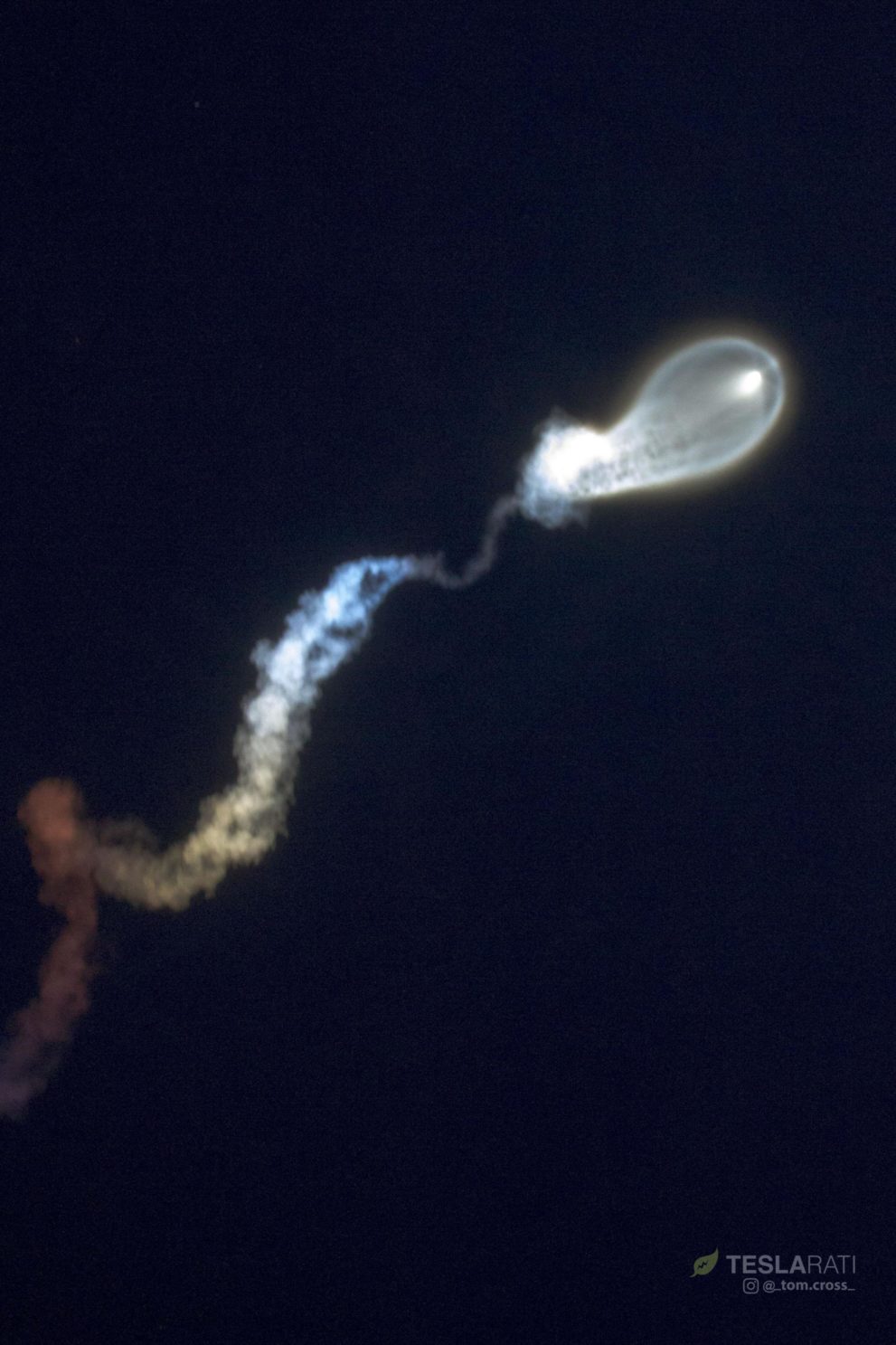 CRS-15’s ‘jellyfish’ plume glowed as Falcon 9 flew above the terminator into the morning sun. (Tom Cross)

Meanwhile, the CRS-15 Dragon capsule currently orbiting Earth will dock with the International Space Station early Monday morning and is scheduled to depart, reenter, and return to Hawthorne, CA for Flight 3 refurbishment in early August, at which point the DM-1 Crew Dragon ought to have arrived in Florida. Aside from Dragon, SpaceX has three new Falcon 9 Block 5 launches scheduled between July 20 and August 2, the boosters of which will all be recovered aboard SpaceX’s fleet of drone ships