Tesla has managed to scale Model 3 production to 5,000 vehicles per week. As noted by Elon Musk in an email to employees, Tesla did not only produce 5,000 Model 3 in seven days; it was also able to maintain the pace of 2,000 vehicles per week for the Model S and Model X.

The signs were already there in the days leading up to the end of the second quarter. This weekend alone, a series of images from workers at Fremont were uploaded on social media, suggesting that the company had hit its all-elusive production goal for the compact electric car. Among the most prominent was a “Model 3 5k Club” banner with signatures of workers from the Fremont factory. Casual snapshots from the facility’s grounds and assembly line, as well as a vehicle labeled “5000th” on its windshield, also suggested that the company had produced its 5,000th Model 3 for the week. 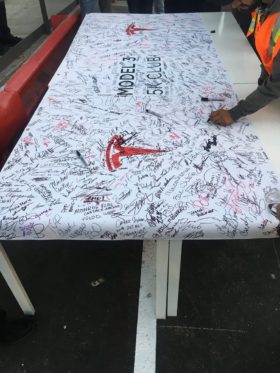 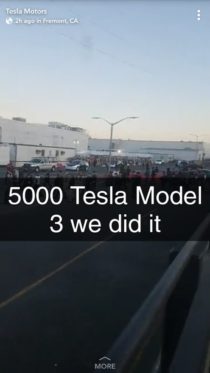 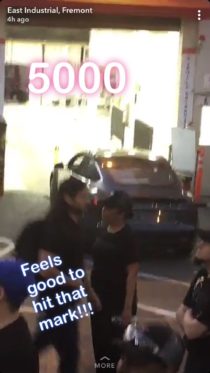 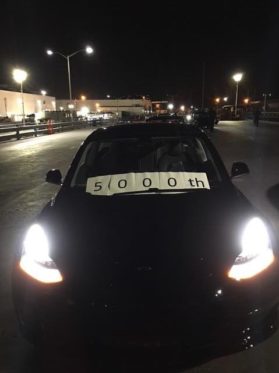 While the images coming out from Fremont incited speculations, they were eventually confirmed by a leaked email from Elon Musk himself. A partial copy of Musk’s email was provided to Teslarati by an anonymous insider.

“We did it!! What an incredible job by an amazing team. Couldn’t be more proud to work with you. It’s an honor. The level of dedication and creativity was mind-blowing. We either found a way or, by will and inventiveness, created entirely new solutions that were thought impossible.

“Intense in tents. Transporting entire production lines across the world in massive cargo planes. Whatever. It worked. Not only did we factory gate over 5,000 Model 3’s, but we also achieved the S & X production target for a combined 7,000 vehicle week!”

The 5,000/week target for the Model 3 has proven to be elusive for the electric car and energy company. During the vehicle’s unveiling last year, Elon Musk estimated that Tesla could attain the milestone by the end of 2017. When the company failed to hit this goal, Tesla opted to move the deadline to the second quarter of 2018, placing a target of 2,500 Model 3 per week at the end of Q1 2018.

Tesla did not meet this goal, though it did manage to manufacture more than 2,000 vehicles during the final week of March. During the 2018 Annual Shareholder Meeting, however, Elon Musk announced that Tesla was on track to hitting its 5,000/week target by the end of Q2 2018. Musk’s reassurance ultimately helped push Tesla stock towards a meteoric rise, at one point even coming close to its all-time high.

Tesla’s Model 3 production milestone did not come easy for the Elon Musk-led company. During the second quarter, the company had to shut down the vehicle’s manufacturing twice to make way for upgrades on the production line. New robots and other machinery were also flown in from Europe to Gigafactory 1 in order to help address bottlenecks in the production of the vehicles’ battery packs.

In an unprecedented move this June, Tesla also erected a massive sprung structure on the grounds of the Fremont factory to house another assembly line for the Model 3. The move, deemed “insanity” by critics, ultimately allowed the company to augment its capability to manufacture the compact electric car.

According to a Reuters report, Tesla is now targeting a pace equivalent to 6,000 Model 3 per week within the next month. As noted by Elon Musk in his email to employees, the recently attained milestone might have very well established Tesla as a formidable car maker.