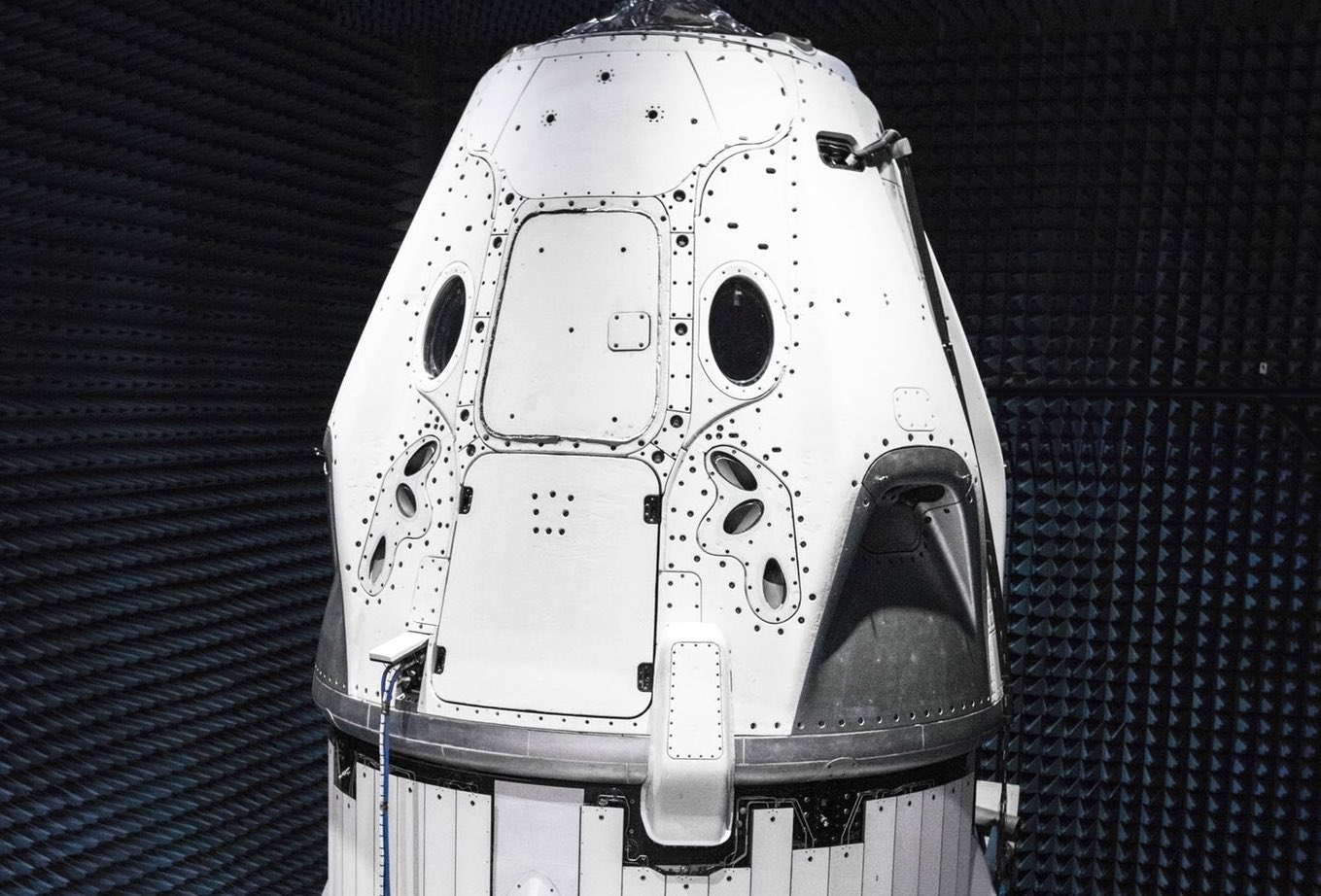 After roughly five years of concerted development, SpaceX CEO Elon Musk has released the first official photo of the company’s Crew Dragon, a version of their orbital spacecraft designed and optimized to reliably return humans to orbit from United States soil.

Traceable back to the very beginning of SpaceX’s first Dragon development program, where the company hoped to easily modify the Cargo Dragon capsule design to support crewed missions, the results of the years of work that followed instead focused on an extensive redesign originally intended to be capable of powered landings similar to Falcon 9 boosters. However, likely the result of an immense certification burden to ever hope to have NASA okay its operational usage, SpaceX chose to kill the landing program in favor of a more traditional ocean splashdown style of return. Extendable leglets were thus removed from the design’s heat shield, a change that also ended any hopes of SpaceX’s plans to partner with NASA and land an unprecedented payload on the surface of Mars, known as Red Dragon. 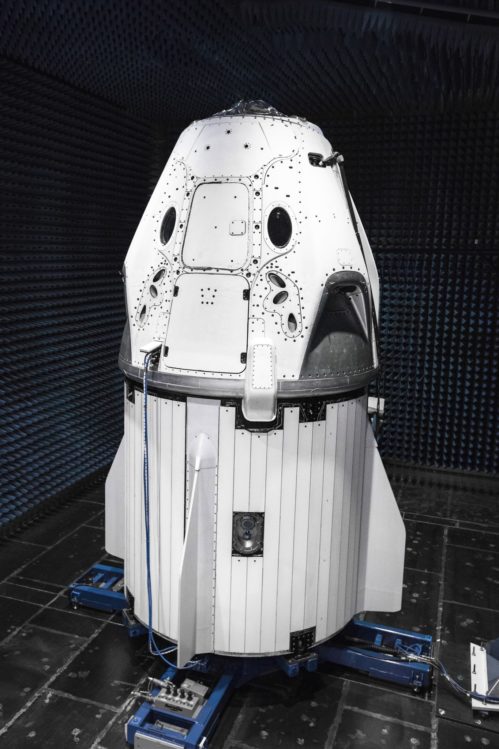 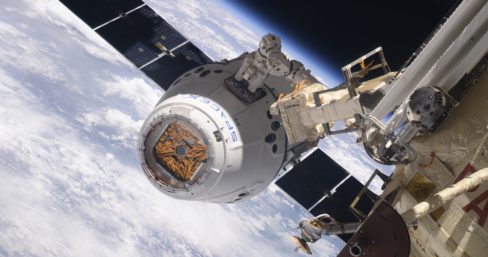 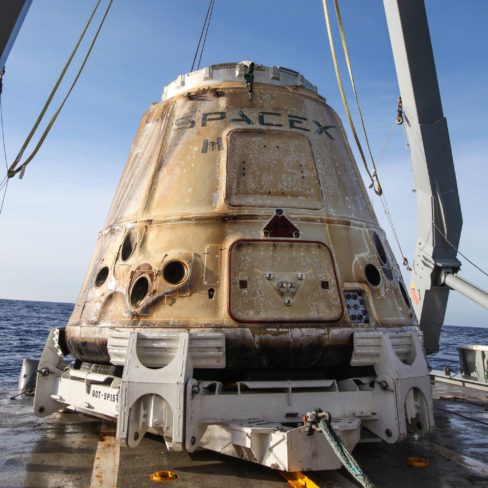 That announcement came in the summer of 2017. Ten quiet months later, Musk confirmed April updates from NASA’s Commercial Crew Program managers with a photo of the first flight-worthy Crew Dragon in SpaceX’s anechoic chamber, ahead of shipment to NASA’s Plum Brook facility for full-up spacecraft testing in vacuum conditions.

While it may look like a completely different design, much of Crew Dragon has a significant level of heritage with the readily flight-proven Cargo Dragon spacecraft, including avionics, parachutes, heat shield expertise, and Draco maneuvering thrusters. The most obvious difference can be found in the four black bays spaced evenly around the edge of the capsule – these contain two SuperDraco thrusters each (eight total) that together act as an integrated launch abort system, capable of launching the capsule and trunk to safety in fractions of a second in the event of Falcon 9 failure at any point during launch. A test of this hardware was first completed almost exactly three years ago, demonstrating acceleration from stand-still to 100 mph in less than a single second.

The hardware shown in Elon Musk’s photo is not intended to carry humans (not on its first flight, at least), instead aiming to be the first Crew Dragon article to make it into Earth orbit, where SpaceX technicians and engineers will conduct and observe a vast fleet of tests with the intent of proving the craft’s capabilities. If successful, this mission (known as DM-1) will be the final step SpaceX needs to complete before DM-2, the upgraded spacecraft’s first real crewed mission.

As of now, DM-1 and DM-2 are officially scheduled for no earlier than (NET) August 31 and December 31 respectively. However, those dates are very unlikely to hold. Per sources with knowledge of Crew Dragon’s progress, DM-2 is currently scheduled for launch NET 2019, likely sometime in the first or second quarter. DM-1, while certainly not ready for an August 31 launch, does appear to be tracking towards a launch later this year, most likely in Q4 2018. SpaceX technicians are working around the clock to ready this groundbreaking hardware for its trip to Plum Brook and eventually to space, spending long shifts in the belly of the Dragon to ensure everything is working as intended. 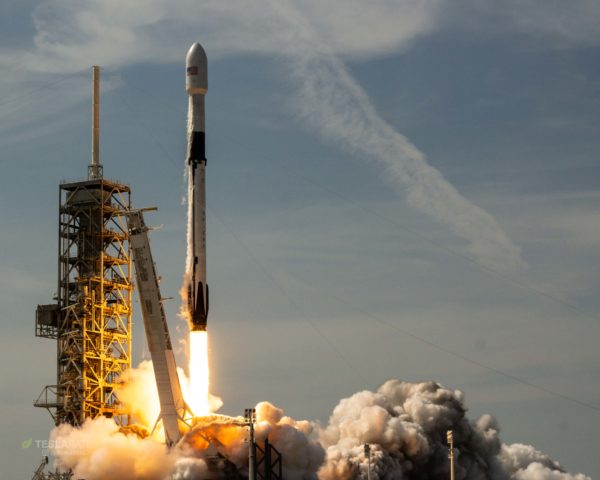 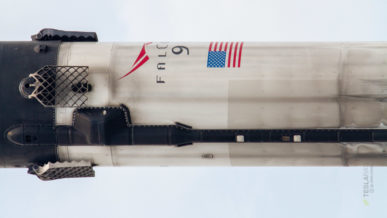 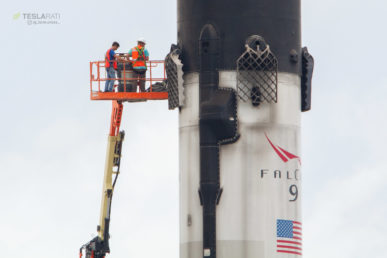 Falcon 9 Block 5, which successfully completed its inaugural launch earlier this month, is another critical path for SpaceX’s first crewed mission (DM-2). As of now, NASA’s Aerospace Safety Advisory Panel (ASAP) has advised NASA to require seven full-up successful launches of the Block 5 iteration before allowing crew to fly on the rocket. In order for SpaceX to achieve that milestone in time for a crewed launch in early 2019, Falcon 9 Block 5 will need to fly (and refly) flawlessly over the course of the second half of 2018. While unclear if ASAP will accept flight-proven launches of the upgraded rocket for its fairly arbitrary “seven launches” requirement, SpaceX will need to rely heavily on Block 5 reflights if they hope to complete as many as 30 launches total this year.

As of now, the next launch of Falcon 9 Block 5 is likely to occur sometime in June, with three total Block 5 flights tentatively scheduled before mid-July. If SpaceX can pull those launches off, it will act as a huge bode of confidence for the future of the rocket, as well as the future of Crew Dragon.