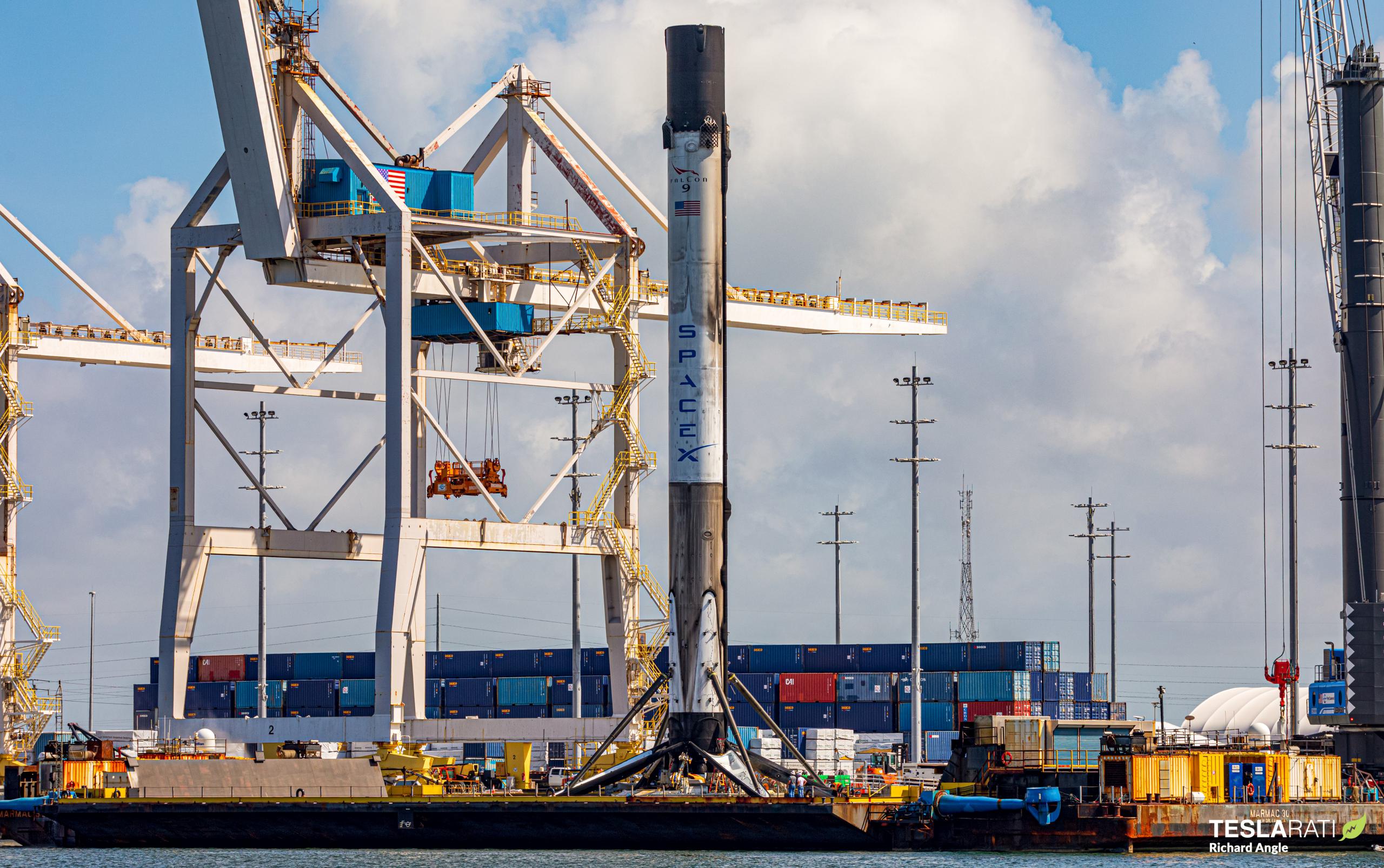 SpaceX appears to have begun preparing drone ship Of Course I Still Love You (OCISLY) for a long journey to California. (Richard Angle)

Minutes later, SpaceX began loading unusual hardware onto the drone ship and it soon became clear that preparations were underway to transport OCISLY from Florida to California. Just an hour or two after B1067 was craned onto dry land, SpaceX began removing OCISLY’s water ballast and installing bumpers on the corners of the drone ship’s ‘wings,’ potentially indicating that the company’s plans to begin West Coast Starlink launches as early as July may actually be within reach.

As of 5pm EDT, June 7th, most of OCISLY’s ballast has now been drained and three of four bumpers have been installed, suggesting that SpaceX intends to send the drone ship west in a matter of days. OCISLY wont be the first SpaceX drone ship to transit the Panama Canal – Just Read The Instructions (JRTI) had the honor of completing the latest transit in August 2019.

JRTI had both ‘wing’ extensions removed and stored on its deck during that transit, adding several months of work for removal and reinstallation. However, the installation of bumpers on OCISLY’s wings implies that that the drone ship will be transiting the Panama Canal with its wings installed, potentially dramatically reducing the amount of time the process takes. Given that OCISLY is already an operational drone ship with dozens of booster landings under its belt, its entirely possible that SpaceX will be able to kick off West Coast Starlink launches almost as soon as the the vessel arrives at its new home – Port of Long Beach, California.

Using JRTI’s 2019 transit as a rule of thumb, the 8000 km (5000 mi) journey from Cape Canaveral to Los Angeles should take drone ship OCISLY approximately four weeks, give or take a few days. In other words, even if OCISLY somehow ends up taking 50% longer than JRTI, SpaceX could still be able to perform its first dedicated West Coast Starlink launch in late July.

Once SpaceX has a dedicated drone ship in California, the company’s plan is to launch an average of one mission every month from its Vandenberg Air/Space Force Base (VAFB) SLC-4 pad. The vast majority of those missions will carry around 50 Starlink satellites, slowly chipping away at three polar ‘tranches’ made up of approximately 1200 spacecraft – around two years of launches at an average rate of one per month.

SpaceX has been targeting July for its first Vandenberg Starlink launch for several months and recently shipped a well-worn Falcon 9 booster from Florida to SLC-4 to support those plans. A few weeks prior, news broke that SpaceX had leased new berths at the Port of Long Beach for Falcon booster and fairing recovery operations, while the company also recently submitted applications for FCC permits for six polar Starlink launches in the next ~6 months. Altogether, everything is coming together for a potentially unprecedented surge of West Coast SpaceX launches.