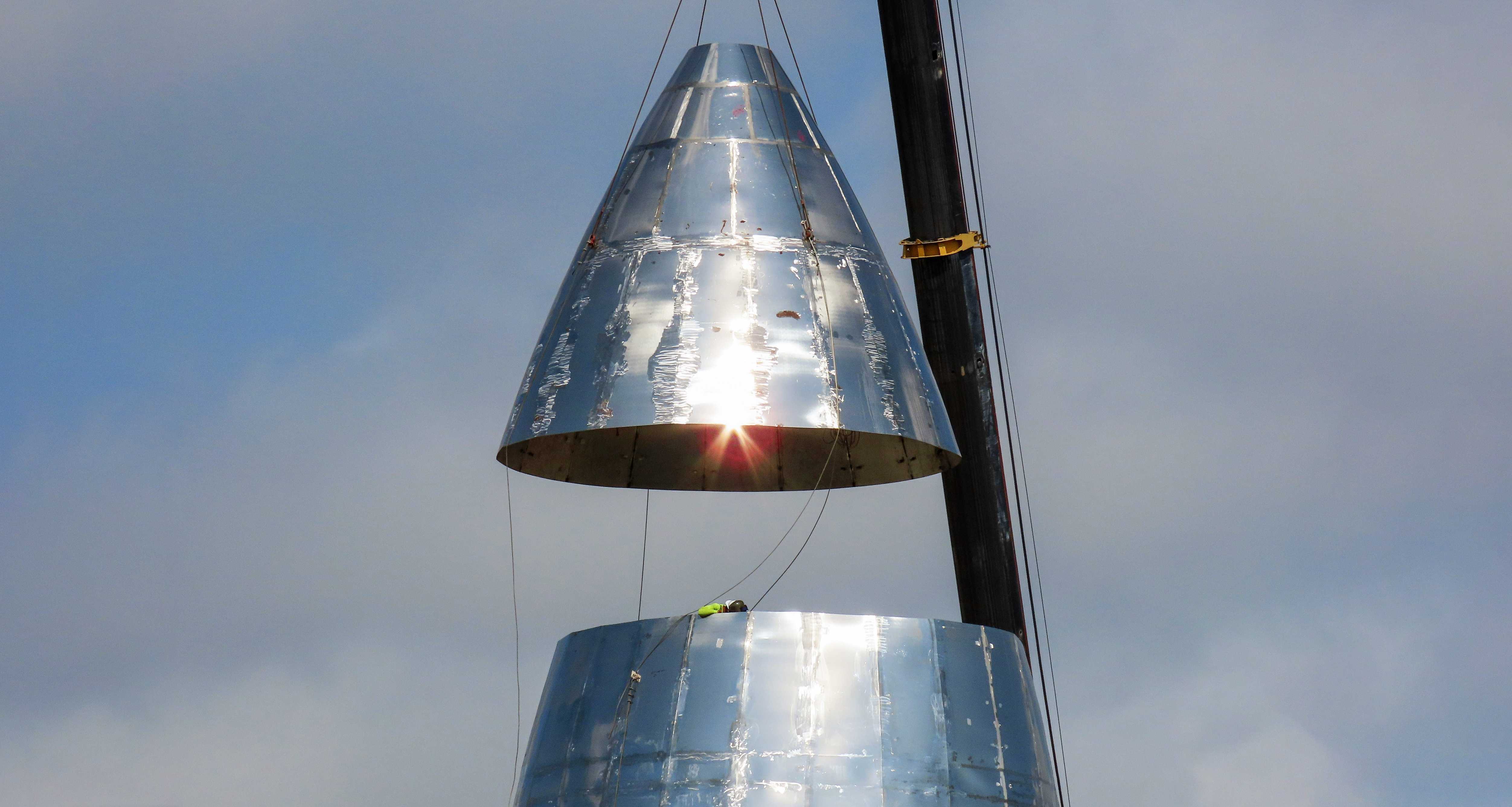 SpaceX's Texas orbital Starship prototype was capped with its nosecone on May 20th. (NASASpaceflight - bocachicagal)

SpaceX CEO Elon Musk indicates that the company is analyzing the use of single-stage Starship spacecraft as a potential pillar of its rapid Earth-to-Earth transport ambitions, meant to realize hypersonic mass-transit at “business-class” prices.

The consequences of such a move are varied but the gist is fairly simple: by cutting down on the complexity of the hardware and infrastructure involved, Earth-based transport via reusable rockets immediately becomes a far more intriguing (and plausible) proposition. Huge challenges remain, but many of those challenges could potentially become identical to those that Starship must already face to achieve SpaceX’s ultimate goal of Mars colonization.

As discussed on Teslarati just ~24 hours ago, using extremely large rockets to quickly, reliably, and safely transport humans around the Earth sounds great on paper but runs into a huge number of brick walls after just a cursory analysis. The single most important aspect of any high-volume form of mass transit is passenger safety – if a method consistently demonstrates that it is likely to kill passengers, it will die a very quick death to public opinion and regulatory fury.

From a statistical standpoint, rockets are thousands of times less safe than passenger aircraft, in large part due to their complexity and cost. As it turns out, an almost invariably foolproof method of improving the safety of a given thing is reducing its complexity (within moderation, of course). The fewer the parts there are, the fewer the parts that can fail and the easier (and cheaper) gathering data and evidence will be.

Originally, SpaceX’s 2017 Earth-to-Earth concept relied on a full two-stage BFR rocket (now Starship/Super Heavy) that could transport passengers anywhere on Earth in 30-60 minutes. Expected to launch off of giant, floating platforms, boosters would launch and land on the same platform while sending Starships on there way around the world. Starships would head to identical platforms at their destination and land directly beside that platform’s booster.

In general, this concept at least seemed serviceable, even if it didn’t exactly scream “practical solution!” Thankfully, much like BFR itself has radically changed in the last 18 or so months, it appears that SpaceX’s concept of Starship-based Earth transportation services has also continued to evolve. According to Musk’s May 30th tweets on the subject, one obvious method of improving the viability of the concept involves entirely removing the booster (Super Heavy) from the picture.

In an instant, SpaceX’s concept of Earth-to-Earth transport starts to look more like an exotic version of proposed supersonic and hypersonic transport solutions. By leaning on lone Starship spacecraft, incapable of reaching orbit by themselves, Musk believes that SpaceX could transport passengers up to ~10,000 km at speeds as high as “Mach 20” (6.9 km/s, 15,500 mph). This is undeniably a downgrade from “anywhere on Earth in less than an hour”, but it would still easily trounce any existing mode of transport and could potentially lend itself to actual suborbital spaceports located in key areas.

At the speeds described, SpaceX could offer ~20-minute trips from New York City to London or ~40-minute trips from Los Angeles to Tokyo as just two examples. Lack of range would certainly limit the potential utility and ubiquity of such a transport service, but there are undeniably enough niche markets to sustain something like that. By relying entirely on Starship, transportation could become far similar to airliner-style travel, while keeping speeds well below orbital velocity would give the spacecraft’s heat shield a much easier time.

For now, at least, the SpaceX dream of global, hypersonic mass-transit is clearly still alive and well, even if the hurdles ahead of it remain no less imposing. According to President and COO Gwynne Shotwell, SpaceX could begin offering Earth-to-Earth transport services as early as 2025, if not earlier with Musk’s proposed Starship-only variant.