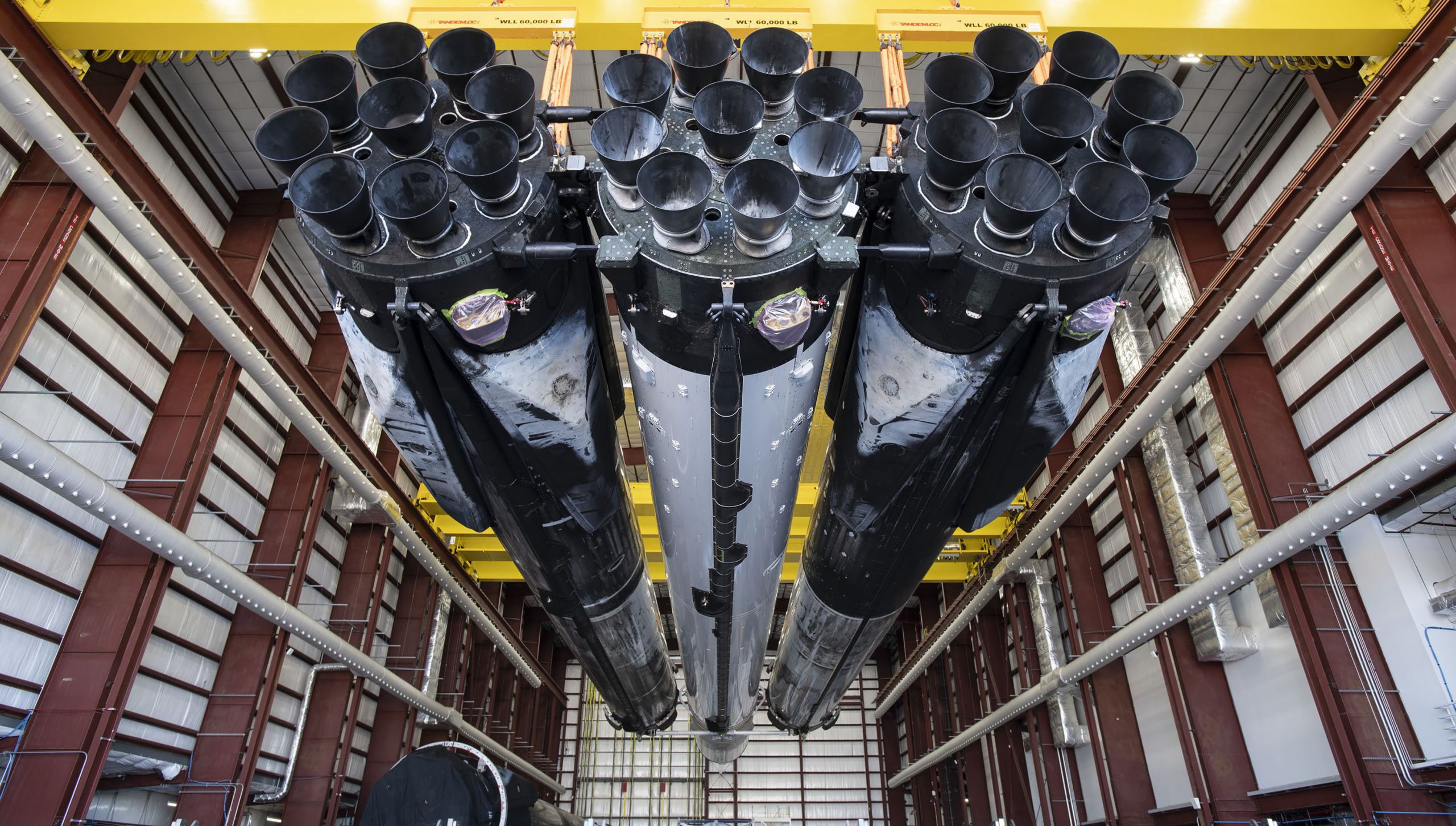 SpaceX Falcon Heavy rocket rolls out for first launch of 2023

Falcon Heavy is days away from its second launch in ten weeks. (SpaceX)

SpaceX has assembled Falcon Heavy and rolled the rocket out to the launch pad for its first mission of 2023.

This particular Falcon Heavy – the fifth overall – is reusing both of the side boosters recovered from the rocket’s fourth launch. Originally scheduled to launch in late 2020, Falcon Heavy Flight 4 finally lifted off from the NASA Kennedy Space Center’s LC-39A pad on November 1st, 2022. The two-year delay was caused almost exclusively by unspecified issues with one or several of the US Space Force-44 (USSF-44) mission’s payloads, forcing SpaceX to store completed Falcon Heavy boosters for more than a year and a half.

Thankfully, despite an unplanned 40-month hiatus between missions, the US Space Force reported that Falcon Heavy’s fourth launch was a “simply outstanding” success. USSF-44 was SpaceX’s first attempt at a direct geosynchronous launch – one of the most difficult missions for rockets that use cryogenic liquid propellant. Falcon Heavy first launched payloads to a highly-elliptical parking orbit (~300 km x ~36,000 km) and then coasted for around six hours in the harsh vacuum of space. Once the Falcon upper stage reached that 36,000-kilometer (~22,250 mi) apogee, all the while fighting to keep its propellant from freezing into slush and boiling into gas, it ignited again to complete a circularization burn – raising the low end of its orbit (perigee) to match the apogee.

The payloads were likely deployed around 6-8 hours after liftoff. To complete such a challenging mission, SpaceX was forced to intentionally sacrifice one of Falcon Heavy’s three potentially reusable boosters. But about eight minutes after liftoff, both of the rocket’s side boosters safely touched down side by side at SpaceX’s LZ-1 and LZ-2 landing zones. Before the launch, military officials had confirmed that those boosters – B1064 and B1065 – were already expected to fly again on Falcon Heavy’s next Space Force launch, USSF-67.

Less than 70 days after their first launch and landing, SpaceX has refurbished B1064 and B1065; attached the boosters to another expendable Falcon Heavy center core and upper stage, and rolled the rocket out to Pad 39A for prelaunch testing. Its payloads and exact launch time are different, but USSF-67 is expected to be virtually identical to USSF-44 – launching directly to GSO with a lightweight collection of miscellaneous experiments and small satellites. The center core will be expended and B1064 and B1065 will attempt another simultaneous landing at LZ-1 and LZ-2.

Like USSF-44, USSF-67’s rocket rolled out for the first time without its cone-like payload fairing installed. Up next, Falcon Heavy will need to complete a wet dress rehearsal and static fire test before SpaceX and the USSF can clear it for flight. SpaceX will then lower the rocket to the ground, return it to the hangar, install the USSF-67 payload, roll the rocket back to the pad, and raise it vertical.

Unofficial but well-sourced public manifests report that SpaceX intends to launch USSF-67 four days from now, shortly before 6 pm EST (23:00 UTC) on Friday, January 13th. SpaceX took five and a half days to complete the same process for USSF-44, so a delay to January 14th or 15th would not be surprising. But at the moment, Friday’s launch attempt is scheduled shortly after sunset, potentially producing the same kind of extraordinary light shows Falcon 9 has become famous for. However, that show would be significantly magnified by Falcon Heavy’s three boosters and twin boostback burns, potentially making it one of the most visually spectacular launches ever.

SpaceX Falcon Heavy rocket rolls out for first launch of 2023