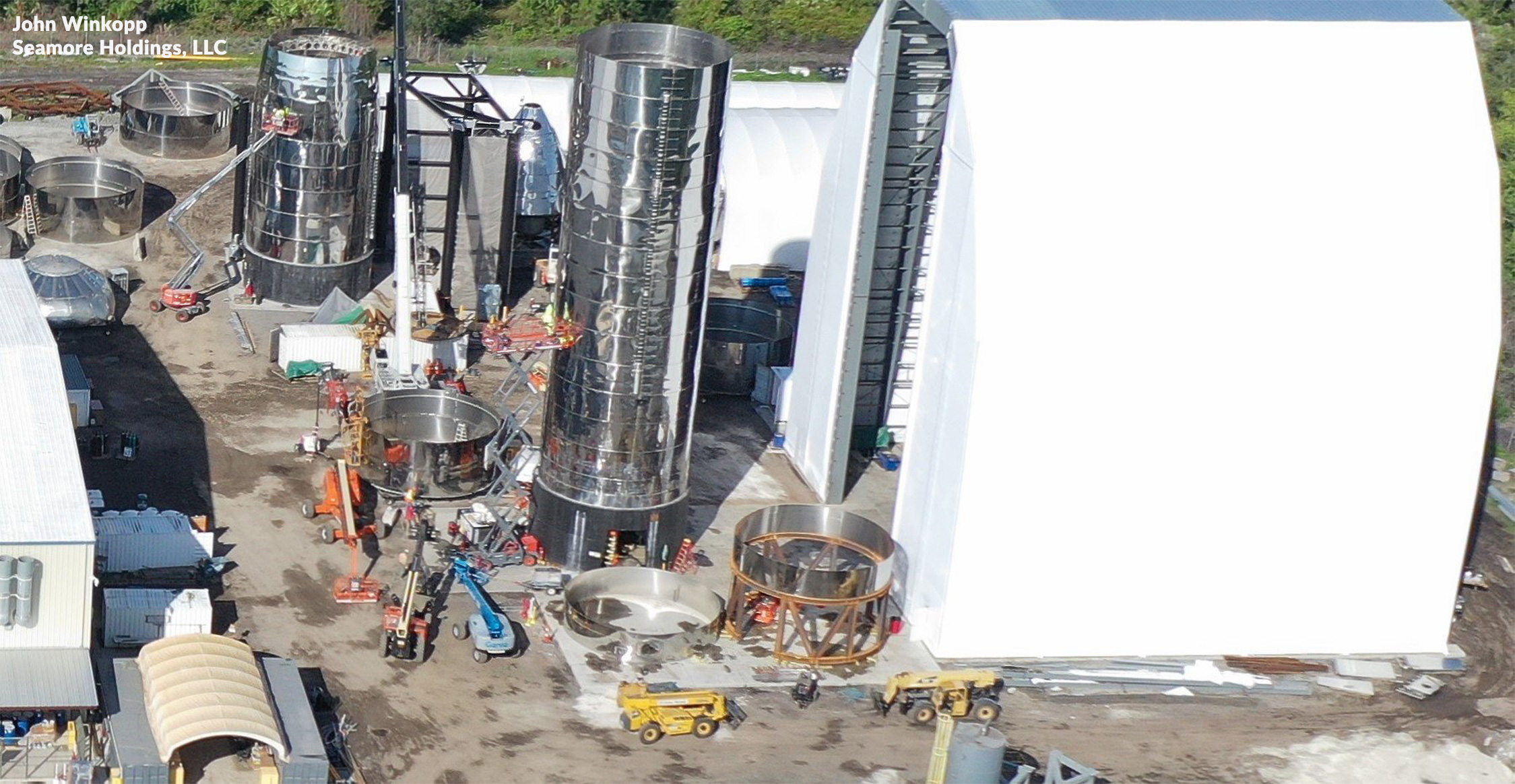 In the center of this image, atop a newly-constructed metal-framework mount, is likely the first steel ring of Starship's Mk4 prototype. (John Winkopp - Seamore Holdings)

SpaceX’s Florida Starship team appears to have taken the first step towards assembling Starship Mk4, the fourth full-scale prototype of the next-generation spaceship.

Although SpaceX’s Boca Chica, Texas Starship campus is undeniably in the lead with their first prototype, Starship Mk1, it appears that the company’s Florida campus is far ahead of Texas with their second Starship prototype.

At the moment, SpaceX has set up two separate Starship build teams in Florida and Texas with the intention of creating a sort of internal competition to see which group’s Starships are first to flight and first to orbit. For the most part, it’s assumed that this “competition” is less a fight to the finish line than it is an A/B test, a common software development practice in which separate teams pursue different methods of achieving the same goals.

In the likely event that SpaceX is performing a radical form of A/B testing with rocket prototypes, both teams are continuously sharing best-practices and lessons-learned as they work to find the best possible methods for fabricating hardware and assembling Starships. Nevertheless, in A/B testing, fundamentally different approaches also tend to result in development schedules and final products that are unique, even if the end results are similar.

In the context of Starship, this is exactly what can be observed at SpaceX’s Florida and Texas facilities. Similarities abound in the radical method of en plein air manufacturing being implemented, while the Starship Mk1 and Mk2 hardware being built and assembled are also relatively similar, even if they have some distinct characteristics.

For example, it’s been observed that Starship Mk2 has almost certainly been constructed out of steel rings that are significantly taller than those used to assemble Starship Mk1. Taller rings meant that Mk2 needed fewer overall rings to reach the same height as Mk1, a fact that likely contributed to the impressive speed with which SpaceX’s Florida team was able to stack and weld most of Starship Mk2’s aerostructure.

According to SpaceX CEO Elon Musk, those similarities (and slight differences) are likely to continue for at least several more generations of prototypes. At a September 28th presentation and update on Starship, Musk revealed his opinion that Starship could be ready for its first orbital test flight(s) as few as six months from then – sometime in Q2 2020, give or take. To get there, Musk estimated that at least 5-6 Starship prototypes would need to be built in the interim.

Starship Mk3 will be built in Texas – in fact, the first ‘seamless’ steel ring may have already been fabricated at SpaceX’s Boca Chica facilities. According to Musk, Starship Mk4 will be SpaceX Cocoa’s second prototype. Based on John Winkopp’s October 17th drone overview, it appears that SpaceX’s Florida team has mounted the first steel Starship Mk4 ring atop a new work mount, potentially marking the start of Starship Mk4 assembly.

SpaceX’s Texas team has prepared at least one full-scale sample of a single-weld (‘seamless’) steel ring, perhaps the start of Mk1’s successor, Starship Mk3. Meanwhile, SpaceX Cocoa – seemingly at some kind of impasse with the final integration and assembly of Starship Mk2 – has churned out a huge number of similarly smooth steel rings, to the extent that Teslarati previously (and incorrectly) surmised that the first Super Heavy booster was being fabricated.

During Musk’s September 28th presentation, he effectively confirmed that the almost two-dozen steel rings hanging out on SpaceX’s Cocoa, Florida campus were almost certainly the beginnings of Starship Mk4. However, given the sheer number of rings present (23), the reality is that what could be the entirety of Starship Mk4’s cylindrical tank and thrust structure section is probably sitting outside in Florida, waiting to be stacked. Altogether, those 23 rings could reach a height of more than 40m (130 ft), potentially more than is actually needed for a Starship tank section.

Last but not least, local photographer and spaceflight fan Jon Van Horne captured what looks like a new Starship tank dome in work at SpaceX’s prospective Kennedy Space Center (KSC) build site, known as Roberts Rd. Given that Starship Mk2 already has two domes installed and a third and final dome staged and ready for installation, this fourth dome is very likely the first for Starship Mk4.

In short, SpaceX’s Florida team is probably weeks ahead of Boca Chica in the process of building a second full-scale Starship prototype. Of course, the ultimate winner of this mock competition isn’t Florida or Texas, it’s SpaceX’s Starship program as a whole.