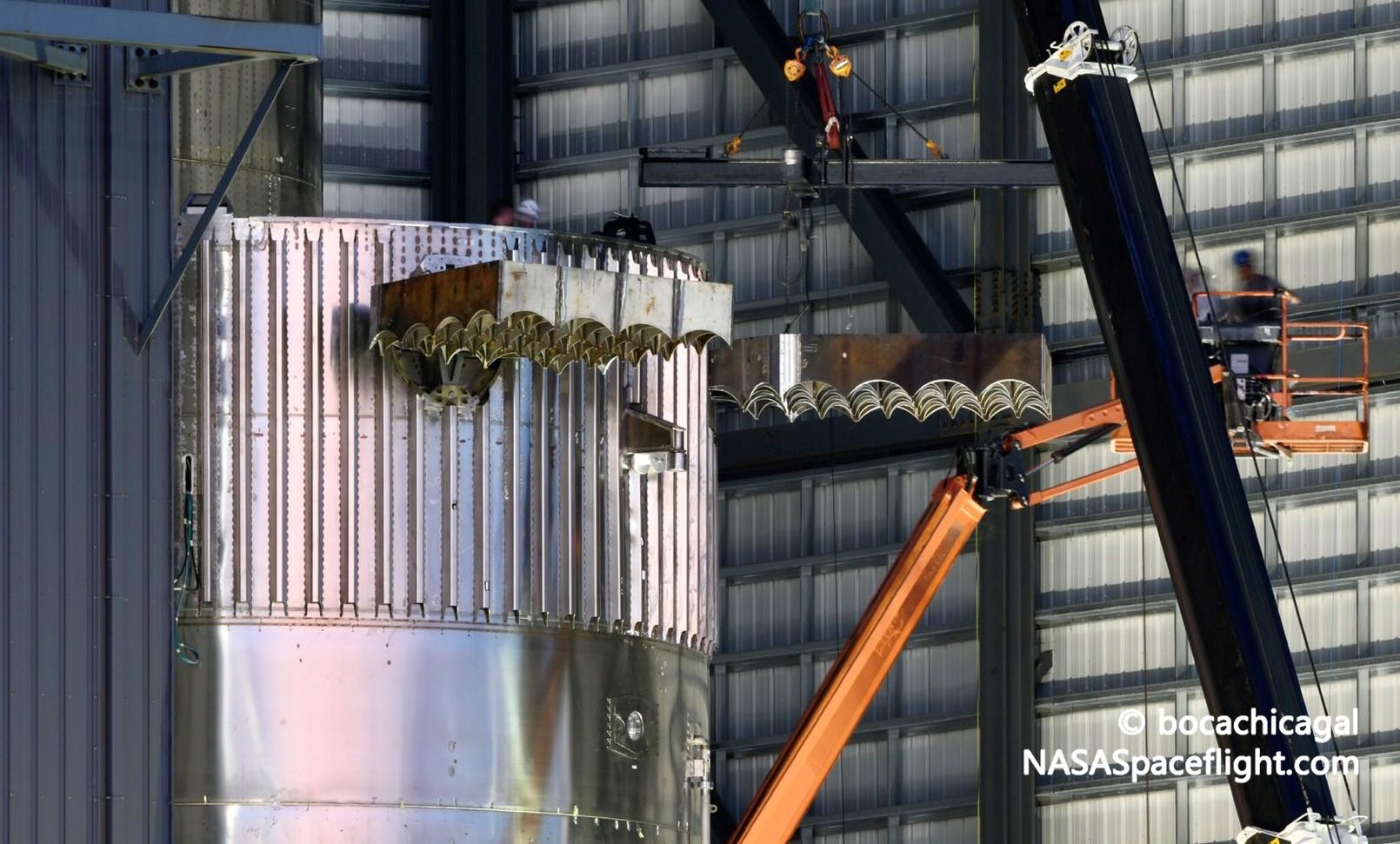 Super Heavy Booster 4 has had four grid fins installed, been stacked to its full height, and has begun Raptor installation in a single two-day period. (NASASpaceflight - bocachicagal)

In the space of two days, SpaceX has outfitted Starship’s first orbital-class Super Heavy booster with four car-sized grid fins, stacked the rocket to its full height, and begun the process of installing up to 29 Raptor engines.

As part of what CEO Elon Musk has described as a “Starbase Surge,” SpaceX has reportedly sent hundreds of employees normaly stationed in California, Florida, and Central Texas to Boca Chica. There, SpaceX has been working for months to build Starship’s first orbital launch pad and first orbital-class ship and booster and prepare all three for an inaugural “Orbital Test Flight” as quickly as possible. Originally scheduled to occur no later than July 2021, Musk’s extremely ambitious target unsurprisingly came and went but SpaceX appears to be well on its way to an “aim for the Moon; miss; fall among the stars” situation as all the parts of Starship’s orbital launch debut begin to come together.

In the last few days, it’s become abundantly clear that SpaceX is likely moving faster than even its most optimistic followers expected.

On July 30th, after less than two days of assembly, Super Heavy Booster 4’s completed (upper) methane tank stack – 13 rings and ~25m (85 ft) tall was briefly rolled out of SpaceX’s Boca Chica ‘high bay.’ A few hours later, the booster tank was rolled back in and SpaceX technicians kicked off the installation of four car-sized steel grid fins. A day and a half later, all four fins were installed.

Unlike the famous cast titanium grid fins on Falcon boosters, Super Heavy’s fins are built out of welded steel (much heavier but magnitudes cheaper) and not designed to retract, meaning that they will remain in their deployed configuration at all times. While also allowing for a much simpler design, B4’s fixed (but rotatable) grid fins will also make it dramatically easier to catch Super Heavy boosters – as Elon Musk has said is the plan – on their grid fins using a giant tower with arms.

Almost immediately after the last grid fin was installed, SpaceX moved Super Heavy B4’s larger (aft) liquid oxygen tank stack onto a stand optimized for transport and stacked the newly finned methane tank on top of the rocket, raising it to its full ~65m (~215 ft) height. After stacking, it takes a team of SpaceX welders at least several hours to join the two steel booster sections into one monolithic rocket.

At the same time as technicians were working to complete Booster 4’s airframe, SpaceX accepted delivery of no less than five Raptor engines, raising the total number of engines delivered in the last five days to at least 18 – including two Raptor Vacuum variants for Starship S20.

In a sign of the breakneck pace SpaceX is working at, teams began installing Raptor engines on Booster 4 before its two halves were fully welded together. In a matter of hours, no less than 12 Raptor Boost (RB) engines have been rolled out of one of SpaceX’s three Boca Chica factory tents and lined up for installation on the first flightworthy Super Heavy. Requiring 29 engines total, it’s not implausible that SpaceX is attempt to fully outfit Booster 4 with all of its Raptors before rolling the rocket down the road to the orbital launch pad.

According to Elon Musk, SpaceX could attempt to install the Super Heavy booster on the pad’s launch mount/table (integrated just days ago) as early as “~Tuesday” and the company has already filed for transport-related road closure on Monday afternoon.