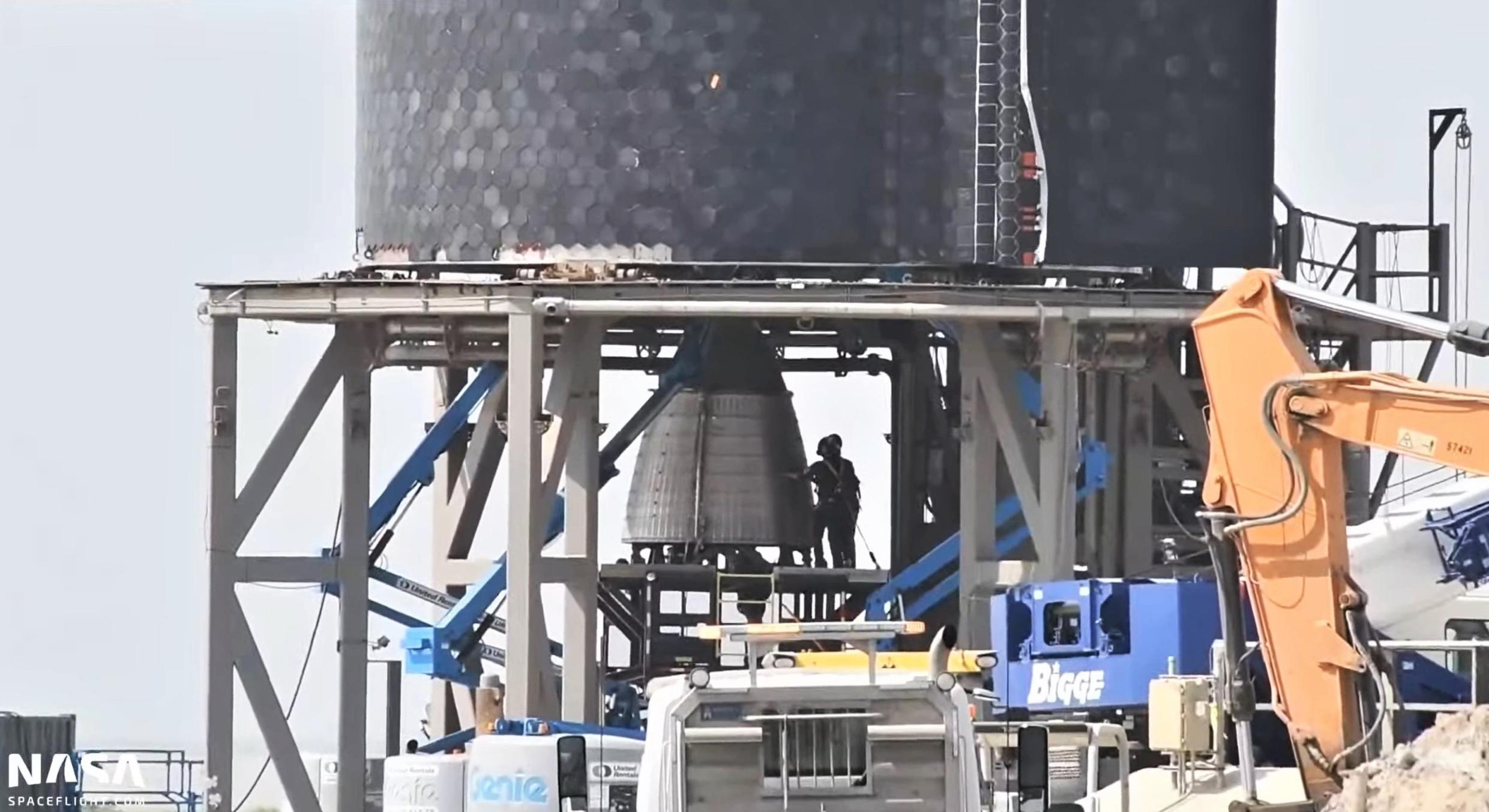 Update: Providing the best views yet of the Raptor Vacuum installation process, SpaceX began installing one of Starship S20’s six engines (one of at least two recently trucked to the launch site) on Monday morning.

It remains to be seen exactly how many engines will be installed on Ship 20 or how many will be ignited during its first static fire test but barring the delivery of more Raptors, signs currently point to an initial test of two engines – one sea-level-optimized Raptor Center (RC) and one Raptor Vacuum with a much larger nozzle. Whenever Ship 20 does fire up those engines, it will be the first static fire of a RVac engine installed on a Starship and the first simultaneous, side-by-side static fire of two different Raptor variants. Since publishing time, SpaceX has cancelled a Tuesday road closure, pushing Starship S20’s first static fire attempt to no earlier than (NET) Wednesday evening.

For the third time in two months, SpaceX has begun installing Raptor engines on its first orbital-class Starship prototype – hopefully for good.

In no uncertain terms, Starship 20’s (S20) path to what could be its last Raptor installations has been about as windy and mysterious as they come. Starship 20 (S20) left the Starbase factory floor for the first time in early August – all six Raptors installed in another program first – for a brief fit check and photo op. After spending about an hour installed on top of Super Heavy Booster 4 (B4), Ship 20 was removed and returned to the build site, where teams removed all six engines and finished wiring and plumbing the vehicle.

Days before the ship’s long-anticipated trip to Starbase’s suborbital launch site for qualification testing, the mount SpaceX prepared for the process quickly had hydraulic rams – used to safely simulate Raptor thrust – were abruptly removed. Starship S20 was then installed on the Pad B mount, where SpaceX proceeded to reinstall six Raptors. Weeks later, after slow heat shield repairs neared completion, SpaceX again removed Ship 20’s Raptors and reinstalled the hydraulic rams it had removed – unused – the month prior. Finally, on September 30th, some seven weeks after the prototype arrived at the suborbital launch site, SpaceX put Starship S20 through its first major test – a lengthy ‘cryoproof’.

Now, ten days after completing a seemingly flawless cryoproof test on its first try, SpaceX has once again trucked multiple Raptors – at least one sea level and one vacuum engine – from the Starbase build site to Starship S20’s suborbital test stand. From the outside looking in, it’s hard not to view the contradictory path S20 took to its first tests – and is still taking to its first static fire(s) – as an unusually visible sign of some kind of internal tug of war or major communication failure between different SpaceX groups or executives.

It’s impossible to determine anything specific beyond the apparent fact that several of the steps taken from Ship 20’s first factory departure to its first cryoproof and static fire tests could have probably been deleted entirely with no harm done and many dozens of hours of work saved. At the end of the day, Starship S20 completed cryoproof testing without issue on the first try and is now seemingly on track to begin its first static fire test campaign later this month.

At the moment, SpaceX has three possible static fire test windows scheduled from 5pm to midnight CDT on Tuesday, Wednesday, and Thursday (Oct 12-14). A similar Monday window was canceled days ago on October 7th, suggesting that more cancellations are probably on the horizon. For now, there’s a chance that Starship S20 – with anywhere from two to all six Raptor engines installed – will fire up for the first time before next weekend. It’s hard to say how exactly SpaceX will proceed. It’s not inconceivable that SpaceX will install all six engines and gradually ramp up to a full six-engine static fire over several tests.

Given that SpaceX has already static fired three Raptor Center (RC) engines on multiple Starship and Super Heavy prototypes, odds are good that Starship S20’s test campaign will be similar – beginning with a three-Raptor static fire, in other words. SpaceX could then add one, two, or all three Raptor Vacuum engines into the fray for one or more additional tests with 4-6 engines total. It’s also possible that suborbital launch mount and pad limitations will prevent more than three engines from firing at once, in which case SpaceX would presumably perform two separate tests of Ship 20’s Raptor Center and Raptor Vacuum engines.

Given that two Raptor variants have never been static fired simultaneously on the same vehicle, it’s hard to imagine that SpaceX won’t also want to perform one or several combined static fires with Raptor Vacuum and Raptor Center engines on Ship 20.