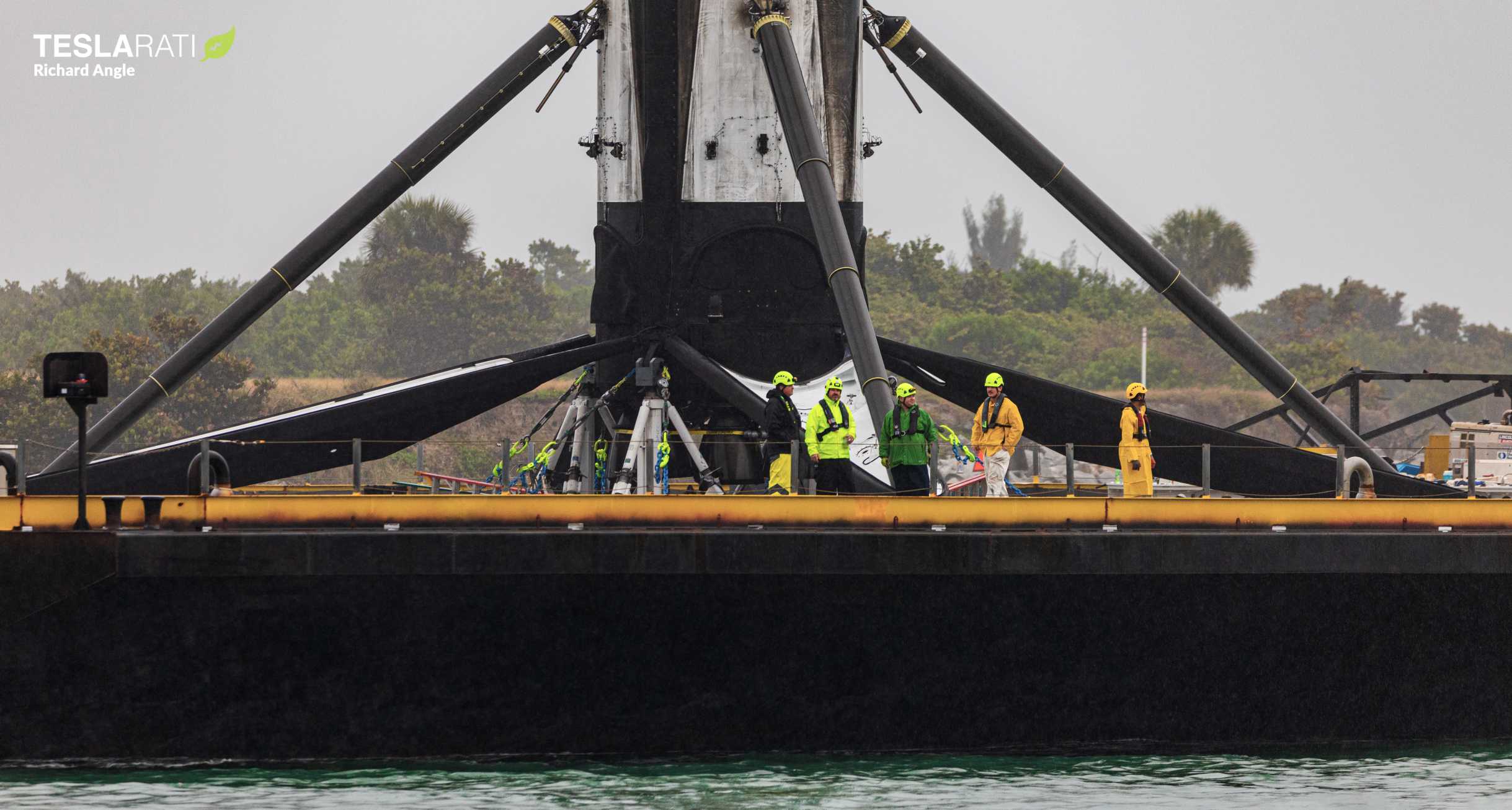 SpaceX has completed its third rocket launch of 2020 and the most recent booster to launch safely returned to Port Canaveral on Saturday after an exceptionally hard drone ship landing.

Falcon 9 booster (first stage) B1051 lifted off for the third time on January 29th, following up two prior orbital-class missions by placing SpaceX’s fourth batch of 60 Starlink satellites into low Earth orbit (LEO). B1051 debuted on March 2nd, 2019 when it became the first Falcon 9 rocket to launch SpaceX’s next-generation Crew Dragon spacecraft, successfully sending the vehicle on its way to what would end up being a flawless rendezvous with the International Space Station (ISS). Less than four months later, B1051 completed its second mission, this time lifting off from SpaceX’s Vandenberg Air Force Base (VAFB), California facilities before landing in zero-visibility fog conditions just a thousand feet from the pad.

Compared to some of the higher-energy geostationary (high orbit) launches SpaceX often performs, B1051’s two prior launches allowed for relatively gentle reentries and landings. On January 29th, 2020, after sending SpaceX’s 3rd batch of upgraded Starlink v1.0 satellites (Starlink V1 L3) on their way to space, the Falcon 9 booster experienced the hardest successful landing seen after a SpaceX launch in quite some time.

With Starlink V1 L3 complete, SpaceX has officially launched an incredible 120 satellites weighing some 32 metric tons (70,500 lb) in a single month – 22 days, to be precise. If everything goes as planned, those two monthly Starlink launches should become SpaceX’s average over the rest of 2020, necessary to satisfy the company’s goal of completing 20-24 Starlink launches this year alone. If SpaceX replicates its January successes this month, the company’s Starlink constellation – already ~230 satellites strong – may even be ready to start serving internet to customers in the northern US and Canada as early as March 2020, less than two months from now.

Meanwhile, the mission marked SpaceX’s second Falcon 9 landing and recovery of the new year, as well as the sixth time an orbital-class SpaceX booster has completed three launches. SpaceX continues to push the envelope of reusable rocketry ever since it debuted Falcon 9’s Block 5 upgrade in May 2018.

Designed to enable no less than 10 launches per booster with minimal refurbishment in between, SpaceX’s Block 5 reusability milestones have gotten much closer together ever since the company began dedicated Starlink launches, reusing a payload fairing for the first time and launching two Falcon 9 boosters for the fourth time in just the last two and a half months. In fact, SpaceX already has plans to launch Falcon 9 booster B1048 for the fifth time – another major reusability first – as early as the next 4-5 weeks.

Starlink V1 L3’s launch followed a trajectory almost exactly identical to the two V1 missions that preceded it in November 2019 and January 2020 and Falcon 9 B1051 ignited its central Merlin 1D engine for the last time around eight minutes after liftoff. Twenty seconds or so later, the Falcon 9 booster rapidly shut down its landing engine, visibly falling several feet onto the deck of drone ship Of Course I Still Love You (OCISLY).

The results of that unintentionally hard landing are extremely apparent in photos taken of the same booster after its first (March 2019) and third (Jan 2020) landings on drone ship OCISLY, compared above. Taken from almost identical perspectives as the drone ship passed through the mouth of Port Canaveral, the difference in the booster’s height and stance are hard to miss, with B1051’s engine bells and the black ‘belt’ of its heat-shielded engine section clearly sitting several feet lower after Starlink V1 L3.

While subtle, the most important difference is near the tips of each visible landing leg’s telescoping boom, visible in the form of a final, smaller cylinder on the left (earlier) image. On the right, that cylinder has effectively disappeared. This is actually an intentional feature of Falcon 9’s landing leg design: known as a ‘crush core’, the tip of each leg boom holds a roughly 1m (3ft) long cylinder of aluminum honeycomb, optimized to lose structural integrity (crush) only after a specific amount of force is applied. In essence, those crush cores serve as dead-simple, single-use shock absorbers that can be reused as long as a given booster’s landing is gentle enough.

B1051’s third landing was definitely not gentle enough, but it appears that the booster’s rough fall onto the drone ship’s deck was just within the safety margins those crush cores provide. Why B1051 fell onto the deck is unclear, potentially caused by the drone being at the bottom of a swell or a last-second anomaly with the booster’s landing engine. Thankfully, regardless of the cause of the anomaly, B1051’s crush cores can be quite easily replaced, meaning that the booster can remain operational as long as its hard landing didn’t cause any less-visible damage or stress elsewhere on the rocket.

In short, SpaceX smart design decisions very likely allowed a part worth just a few thousand dollars to save a Falcon 9 booster worth tens of millions of dollars from the scrap heap. With a little luck, B1051 should have at least several more launches in its future before entering retirement.