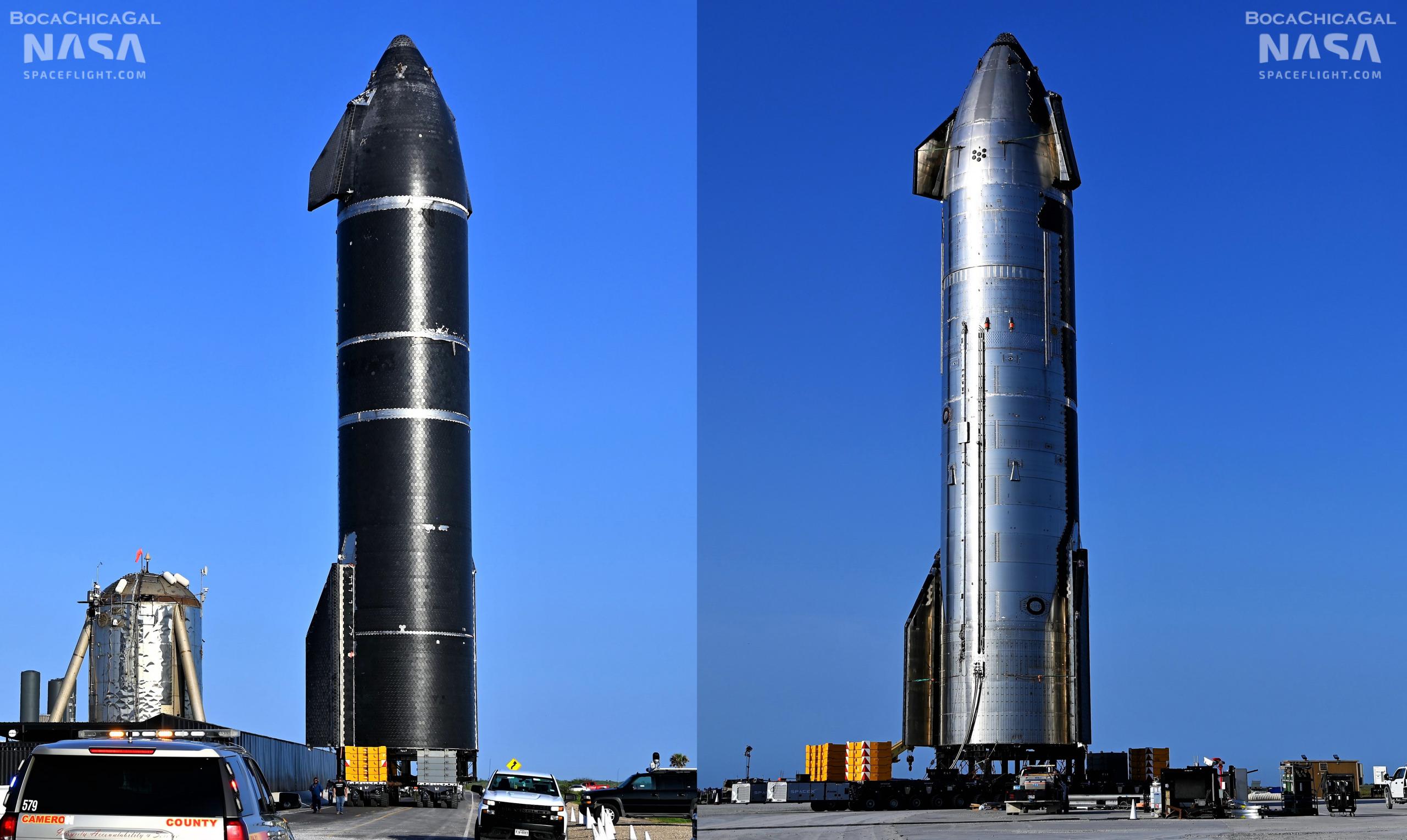 For the first time in more than nine months, SpaceX has rolled a new Starship prototype to its Starbase, Texas launch facilities in the hopes of kicking off qualification testing in the near future.

The new activity exemplifies just how different – and more subdued – Starbase’s last year has been compared to the year prior. However, it also signals new hope for a significantly more eventful 2022 as SpaceX once again finds itself preparing for Starship’s first orbital launch attempt – albeit with an entirely different rocket.

The last time SpaceX rolled a new and functional Starship prototype from the factory to the test stand was on August 13th, 2021, when Starship S20 was transported back to the pad for the second time that month. On August 5th, the same unfinished Starship was stacked on top of Super Heavy booster B4, briefly assembling the largest rocket ever built. With the luxury of hindsight, it’s now clear that that particular milestone was more of a photo-op than a technical achievement. Nonetheless, Ship 20’s path was far more productive than Booster 4’s. The Starship returned to the Starbase factory for a few days of finishing touches before arriving back at the pad on August 13th. Only in the last week of September did Ship 20 finally begin its first significant tests, followed by its first Raptor static fire in mid-October. In mid-November, Ship 20 completed the first of several successful six-Raptor static fires.

Ultimately, by the time Ship 20 was retired in May 2022, the Starship was arguably fully ready to attempt to reach orbit or at least perform some kind of ambitious hypersonic test flight. However, Super Heavy Booster 4 never made it even a fraction of the way to a similar level of flight readiness and SpaceX never received the FAA environmental approval or launch license needed for an orbital launch attempt.

Only now, in May 2022, does it finally look likely that SpaceX will finally receive the necessary permissions for a limited orbital test flight campaign in the near future. While it’s hard to say if Booster 4 and Ship 20 could have supported some kind of launch campaign if permission had been granted months ago, what’s clear is that all aspects – flight hardware, pad hardware, and bureaucracy – have been chronically delayed to the point that Booster 4 and Ship 20 are now heavily outdated.

In their place, now, stand Super Heavy B7 and Starship S24 – the new ‘chosen ones’ assigned to Starship’s orbital launch debut. Both feature extensive design changes and account for an upgraded version of the Raptor engine and countless lessons learned over the better part of a year spent troubleshooting and testing their predecessors. While it did get off to a rocky start, Booster 7 has already completed several cryogenic proof tests and is in the middle of being outfitted with 33 new Raptor engines.

On the other hand, perhaps indicating SpaceX’s satisfaction with Ship 20’s performance, Starship S24 has been on the back burner in comparison. Only on May 26th, 2022 did SpaceX finally finish the prototype to the point that it was ready to begin qualification testing. Missing hundreds of TPS tiles and an aerocover cap, Ship 24 was quickly moved into position at a sort of drive-by test stand where it appears the prototype will first need to pass basic pressure and cryogenic proof tests.

If it passes those tests, SpaceX will then install Ship 24 on a suborbital launch and test stand (Suborbital Pad A) that has been significantly modified for qualification testing. Rather than leaping straight into static fires, SpaceX will minimize the risk of catastrophic failure by first using hydraulic rams to simulate the thrust of six Raptor V2 engines while Starship’s steel tanks and plumbing are chilled to cryogenic temperatures. Only after Ship 24 completes stress testing will SpaceX install new Raptor engines and prepare to replicate Ship 20’s success with several static fires.

Thanks to Raptor V2’s improvements, Ship 24 will likely need to withstand around 1400 tons (~3.1M lbf) of thrust at liftoff – almost 25% more than Ship 20 ever experienced. Beyond a sturdier thrust section, Ship 24 is also the first Starship SpaceX has outfitted with a next-generation nose; the first with a significant landing propellant (‘header’) tank redesign; and the first with a potentially functional payload bay and door.

Assuming Ship 24 passes all planned cryoproof and thrust simulation tests, it remains to be seen if SpaceX will return the Starship to Starbase factory facilities or – like with Ship 20 – install Raptors and finish its heat shield and thermal protection while sitting on the test stand. SpaceX has two test windows currently scheduled: one from 6am to 12pm CDT on Friday, May 27th and the other from 10am to 10pm CDT on Tuesday, May 31st.