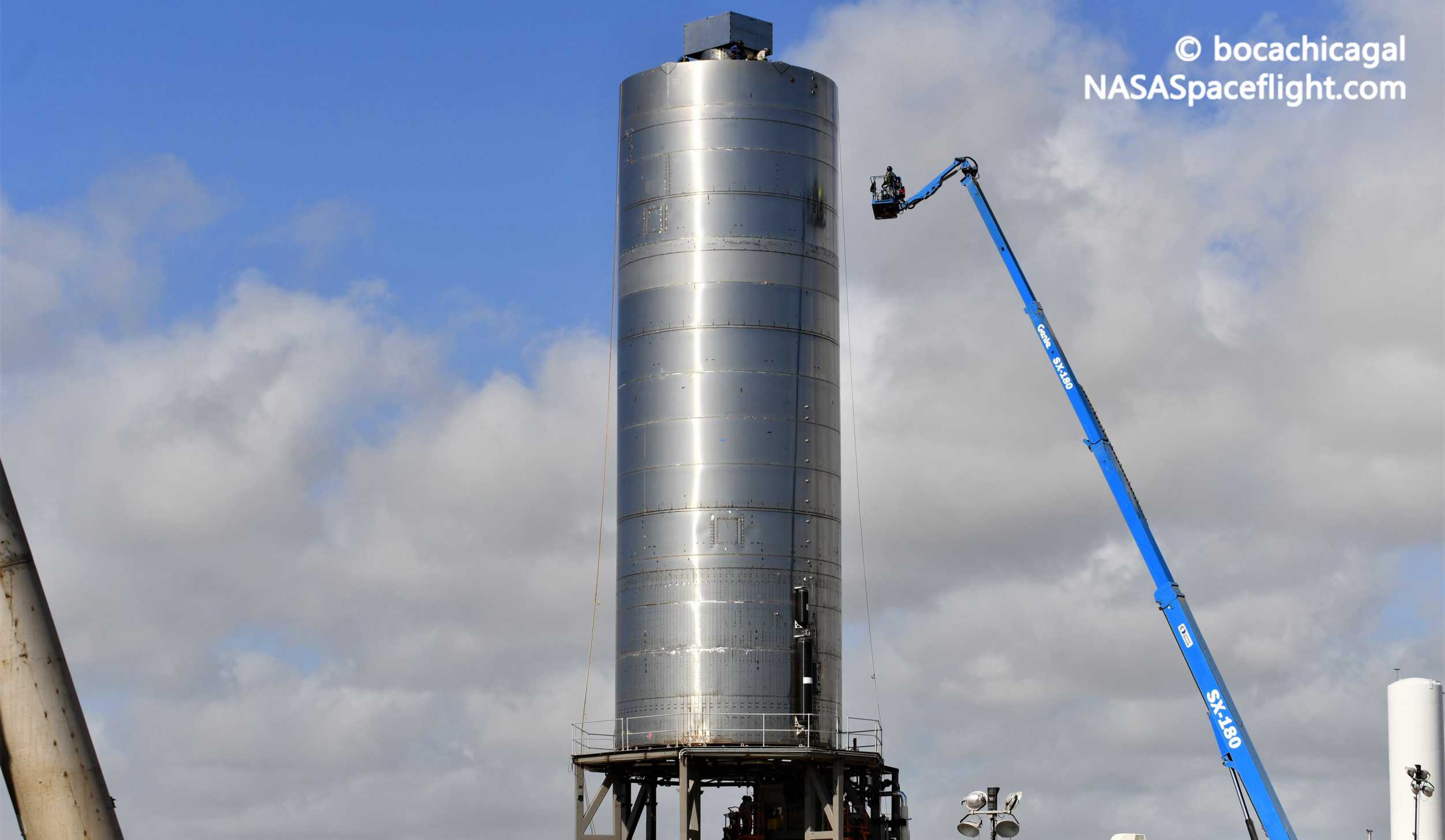 According to SpaceX CEO Elon Musk, Starship SN5 could become the first full-scale prototype to take flight as early as this week. (NASASpaceflight - bocachicagal)

SpaceX CEO Elon Musk says that Starship’s full-scale flight debut could happen as early as this week if a suite of tests planned over the next few days goes according to plan.

The SpaceX leader also revealed a bit about the company’s plan to create its own custom steel alloy to build the best Starships possible – the first of which is already under construction. Beginning with Starship SN8, parts of which have already been spotted in work at SpaceX’s Boca Chica, Texas rocket factory, all future ships are expected to be built out of steel different than the 301 alloy used for all prior ships.

Of course, Starship SN8 is likely 2-4 weeks at best away from being ready for integrated testing. Instead, Starship SN5 is currently occupying SpaceX’s adjacent test stand and launch pad as teams work to prepare the rocket for several tests – potentially culminating in the first flight of a full-scale Starship.

For more than two weeks, SpaceX has been slowly preparing Starship SN5 for its first wet dress rehearsals and Raptor engine static fires. When a ground systems leak lead to a massive fuel-air explosion and Starship SN4’s destruction, it severely damaged the pad and required the construction of an entirely new launch mount.

Based on photos of the gradual rebuild taken by Boca Chica Village resident and photographer Mary (bocachicagal), SpaceX has visibly taken the opportunity to implement some significant changes (possibly upgrades) to the pad’s ground support equipment (GSE). Notably, the company has already installed a system meant to reclaim waste methane that would otherwise have to be burned at a flare stack, instead re-liquefying the gas a returning it to propellant storage tanks.

It’s unclear if SpaceX is attempting to onboard that new system as part of Starship SN5’s first major fueling tests, but the flare stack has not been active for weeks and the finicky nature of methane reclamation would certainly explain some of the 10+ days of delays.

On July 17th, after many day-by-day delays, SpaceX began Starship SN5’s first fueling test. The rocket appeared to be briefly pressurized with ambient-temperature gas (possibly methane and oxygen) but the test was quickly aborted. Another attempt on July 20th was also aborted after several hours with no frost (indicative of propellant loading). Finally, a third attempt on July 21st was canceled before it began, although a roadblock was briefly set up prior to the abort. Shortly after the abort, SpaceX published plans for another attempt at Starship SN5’s first WDR and static fire test on July 22nd with backup windows (8am-5pm CDT, UTC-5) on the 23rd and 24th.

First reported by NASASpaceflight.com, Elon Musk’s comment confirms their sourced information that Starship SN5’s flight debut could follow just a few days after a successful WDR and static fire. Given the sheer number of delays SN5’s test campaign has suffered, that’s far from guaranteed, but the ship certainly still has a shot at a hop test this weekend if things go perfectly over the next several days. Stay tuned for updates later today or tomorrow.